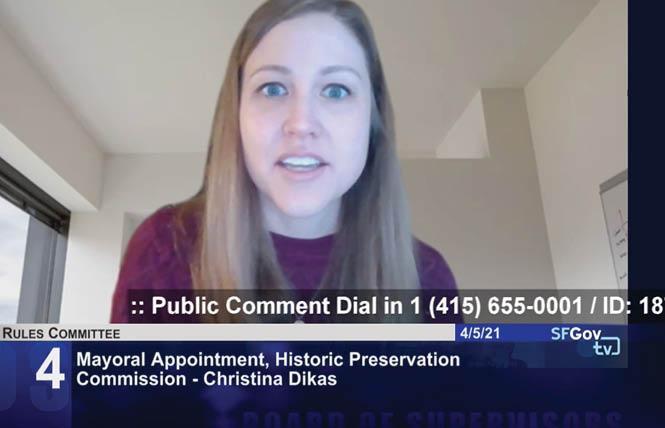 Christina Dikas withdrew her nomination to the San Francisco Historic Preservation Commission just hours before the Board of Supervisors likely would have rejected her. Photo: Screengrab

Hours prior to her likely being rejected by the San Francisco Board of Supervisors at its meeting Tuesday, Historic Preservation Commission mayoral appointee Christina Dikas withdrew her nomination. Having been the fourth straight person named to the oversight body in recent months by Mayor London Breed, Dikas has faced stiff opposition due to her appointment meaning there would be no LGBTQ representation on the commission.

The supervisors' rules committee had voted 3-0 at its meeting last Monday, April 5, against seating Dikas, an architectural historian and cultural resources planner who works for the firm Page and Turnbull. The vote had been expected as all three committee members had told the Bay Area Reporter they would not support Dikas when her nomination was announced.

The B.A.R. editorial board had called on the full board to reject Dikas at its April 13 meeting, as had local LGBTQ historic preservation advocates and the political action committee of the Harvey Milk LGBTQ Democratic Club. A source had told the B.A.R. Tuesday that there were likely at least six votes on the board against confirming Dikas, the minimum required to reject her nomination.

Faced with such opposition, Dikas informed Breed Tuesday morning that she was pulling her name from consideration for the oversight role. She thanked the mayor for having confidence in her and said she was honored to be considered.

"I was looking forward to serving on the Historic Preservation Commission and was eager to continue the work and conversation of balancing our city's development needs together with recognizing the rich historical and cultural character of our City and its diverse communities through landmark designations and other preservation program initiatives," wrote Dikas. "In my work and volunteer efforts with the California Preservation Foundation, both based in San Francisco, I will continue to be involved in discussions and initiatives within the field of historic preservation regarding the need for housing, the effects of climate change, and recognition of previously under-represented communities and voices."

In an emailed statement to the B.A.R. Wednesday, Breed press director Andy Lynch wrote, "Christina Dikas is highly qualified for this position and the mayor appreciates her willingness to serve the city, but it became clear that the board would not move forward with her nomination. Mayor Breed will continue to nominate qualified individuals for this position moving forward."

The mayor is sure to face continued pressure to name an LGBTQ person to the seat. In February, Breed did not reappoint the Historic Preservation Commission's two gay members, Jonathan Pearlman and Aaron Hyland, who had been serving as the commission's president. Pearlman's Seat 3 is to be filled by an architectural historian, and LGBTQ community leaders have encouraged Breed to name Hyland to it.

"I am excited about the opportunity to contribute to my city's legacy in the capacity as a commissioner," Dikas had told the rules committee members last week.

But gay District 8 Supervisor Rafael Mandelman, the board's lone LGBTQ community member, explained his opposition to her appointment by harkening back to one of his board predecessors, the late gay supervisor Harvey Milk. In the 1970s Milk routinely called for there to be diverse leadership on city boards and commissions that included LGBTQ people in his columns in the B.A.R. and on the campaign trail. He himself was one of the first out people appointed by a mayor to a city oversight body.

While he stressed he felt Dikas was qualified for the position, Mandelman said he nevertheless could not support her and faulted the mayor's office for not nominating an LGBTQ person for the seat. Following Dikas' decision to withdraw, Mandelman renewed his calls for Breed to name an out appointee who could continue the work on LGBTQ preservation issues that Hyland had been spearheading.

"I know there are queer women and people of color who are ready, willing and able to continue that work," Mandelman said during the board hearing, when the supervisors voted 11-0 to table the item due to Dikas' decision. "I think this is an opportunity to look for candidates who can continue that work and add to the diversity of representation on our commissions."

District 3 Supervisor Aaron Peskin, who chairs the rules committee, and District 1 Supervisor Connie Chan have repeatedly concurred with Mandelman's contention there needs to be a member from the LGBTQ community on the historic preservation oversight body.

"I look forward to having an appointment that truly represents the LGBTQ community on the Historic Preservation Commission," Chan had said last week.

Tuesday, Peskin noted how rare it was for the rules committee to reject a mayoral appointee and that he wasn't looking for a fight with Breed's administration over the seat. But he again pressed the mayor to nominate a qualified LGBTQ person willing to serve and is committed to addressing LGBTQ historic preservation issues in the city.

"I think we should start there, rather than have the mayor renominate people who may be LGBT but don't have that commitment and that demonstrated history," said Peskin. "I will leave it there and thank Ms. Dikas for withdrawing her name from consideration this afternoon."

The matter of the board seat comes as a number of LGBTQ historical preservation items move through the city's approval process. City landmarks are also moving through the approval process for the Noe Valley residence of the late pioneering lesbian couple Phyllis Lyon and Del Martin and the gay-owned Eagle bar in SOMA popular with the leather community.

Other local LGBTQ historic sites, however, continue to languish on a city planning department list of future potential city landmarks while early talks have focused on turning Milk's former home and camera store site in the Castro into a national historic site.

UPDATED 4/13/2021 with comments from Supervisors Mandelman and Peskin.

Breed nominates out man for preservation panel
Sign up!