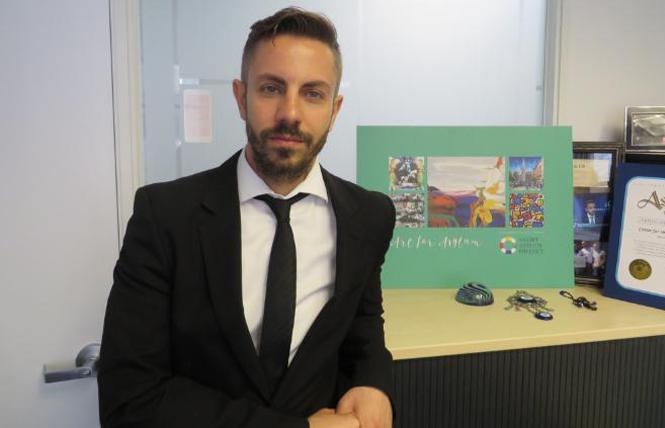 Several programs are providing free services to undocumented immigrants who wish to remain in the U.S. and obtain work permits. One based in San Francisco is specifically looking to help LGBTQ people apply to the Deferred Action for Childhood Arrivals program or renew their participation in the federally administered program.

Meanwhile, the Boston-based nonprofit Immigration Help is offering free assistance to anyone eligible for the DACA program. Immigrants from across the country can visit its website at http://www.immigrationhelp.org/ to request assistance.

"We have been able to help several thousand individuals at different stages of the process. We help determine if they are eligible to helping them submit their forms to U.S. Citizenship and Immigration Services," said Fernando Urbina, a gay student at Harvard who is the nonprofit's director of outreach. "It is all free of charge. We help them bypass paying the thousands of dollars to an attorney to help them complete these processes."

The Office of Civic Engagement and Immigrant Affairs for the city and county of San Francisco has partnered with the LGBT Asylum Project, which is based in the LGBTQ Castro district, so that the nonprofit can expand its services to include DACA participants or those eligible to apply. Up until now the nonprofit has largely focused on assisting asylum seekers fleeing anti-LGBTQ persecution in their home countries.

It was awarded $60,000 per year for the current and next fiscal years to offer the DACA-focused services. It quietly added the service to its website earlier this year and is now making it more widely known.

"Our main goal is to become the city of San Francisco's go-to LGBT immigration service provider, so ideally we will have the asylum program and be aiding DACA applicants," said Okan Sengun, a gay man and lawyer who is the executive director and co-founder of the LGBT Asylum Project.

Norjmoo Battulga, who came from Mongolia to the U.S. when she was 5 years old, first applied for the DACA program at age 15. She did so on her own and wished she had help filling out the paperwork back then.

Now Battulga, who is bisexual and graduated from Golden Gate University's law school last year, is assisting others eligible for DACA as a legal services funder network fellow with the LGBT Asylum Project. The federal program allowed her to attend college and find employment, noted Battulga, who hopes others will take advantage of it.

"It has opened up a lot of opportunities and doors for me I wouldn't have had if I had to keep managing without paperwork. It also gave me a foot to stand on in terms of not being afraid of being deported," she said. "It gave me the opportunity to build a life here instead of being stuck. I think other people will find if they get DACA status it gives you some hope for the future."

The Obama administration set up the DACA program in 2012, and the U.S. Supreme Court last June rejected the Trump administration's efforts to shut it down. At the time more than 600,000 immigrants, many brought to America as very young children by their families, had benefitted from the program.

It allows undocumented immigrants who entered the United States before the age of 16, and meet other requirements, to receive temporary work authorization and not have to face the prospect of being deported during renewable two-year periods. Known as Dreamers, there are an estimated 81,000 such immigrants in the U.S. and about 39,000 had taken advantage of the DACA program as of last year, according to the Williams Institute at UCLA School of Law.

Due to the ongoing COVID pandemic the LGBT Asylum Project's rollout of its new DACA services was delayed, said Sengun, though the agency has been working with the city's immigrant affairs department to host virtual clinics the last Tuesday of the month for those who require legal assistance with their DACA applications or renewal forms. Because its Castro office is not yet open to the public, the agency plans to offer its DACA program virtually for the time being.

"Once we make the announcement, we hope to get more LGBTQ applicants," said Sengun.

Currently, anyone eligible for the DACA program can fill out an intake form on the website of the asylum project at https://www.lgbtasylumproject.org/ under the "Get Help" section. Those who arrived in the U.S. before 2007 and were under the age of 16 at the time can apply.

"The first rule is they had to be under 31 years old as of 2012, the day DACA initially passed," explained Sengun.

Any DACA youth can seek support, whether they are LGBTQ or not, from the asylum project. One of the agency's three current staffers assigned to work with the DACA applicants will respond within a few days.

"We have multiple people reviewing those applications. We want to make sure they are eligible and review them and then schedule legal consultations. Then we start to work on their cases," said Sengun. "We did have a few intakes for DACA already, mainly renewals."

The process for a DACA participant to renew is simpler than for those submitting their initial application, as such individuals need to supply paperwork proving they have been living in the U.S. It can take two to five months to process DACA renewals, and seven to nine months for the federal government to make a final determination on DACA initial applications, noted Sengun.

"Right now it is really hard to give certain processing times because of COVID-19," he explained.

Urbina became involved with Immigration Help, which launched in 2019, because his mother emigrated from Mexico to the U.S. Now he wants to help other immigrants who can often be baffled by America's immigration system.

"She went through a complicated naturalization process. I want to be part of a team to help and improve these processes," said Urbina, 20, who is majoring in government with a minor in ethnicity, migration, rights.

Immigration Help partners with local agencies in communities across the country to supplement the services they provide to immigrants and DACA applicants, said Urbina. It has found that local libraries are one of the best institutions to form alliances with, he said.

"We find more people trust local institutions like public libraries, so we are able to connect with more people," said Urbina.

While DACA applicants can fill out the required paperwork on their own, both Sengun and Urbina told the Bay Area Reporter it is easy for people to make mistakes on the forms. Thus, they stressed it is beneficial for them to work with a nonprofit offering DACA assistance to ensure their applications for the program are in order so they can be processed faster and not rejected.

"If you don't put the appropriate info in, your application could be rejected," noted Urbina. "It is extremely common that individuals make errors on their forms just because some of the questions can be unclear or people don't know how to answer some of them."

Since the election last year of President Joe Biden there has been an uptick in requests for Immigration Help's services, said Urbina. Because of Biden's pro-immigrant stances there is renewed interest in the DACA program in particular, he said.

Web Extra: For more queer political news, be sure to check http://www.ebar.com Monday mornings for Political Notes, the notebook's online companion. This week's column reported on the out candidates running to succeed Assemblyman Rob Bonta (D-Oakland) as he is set to become California's next attorney general.