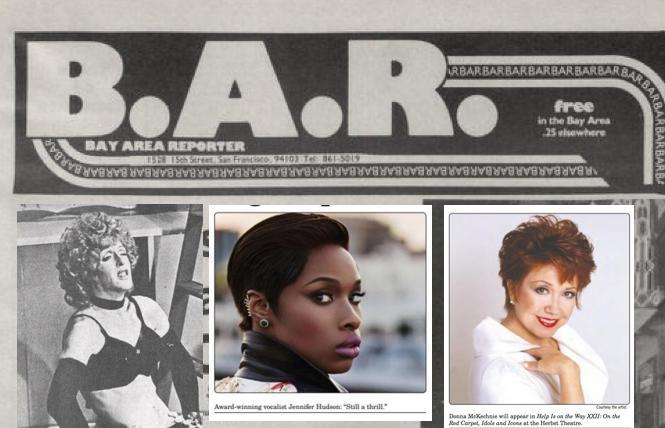 From the beginning, the Bay Area Reporter has covered celebrities, both Broadway and Hollywood stars. While some declined to talk to us —Barbra Streisand said no to an interview request in 2016— many have indeed sat down with us for a chat. There are many such examples in the B.A.R. archives.

Perhaps the very first celebrity coverage in the B.A.R. came when the paper was barely two months old. It was 1971 and Michael Greer, possibly the first out actor to appear in Hollywood films, was co-starring in MGM's film adaptation of the gay prison drama Fortune and Men's Eyes, reprising the role he had played on stage. In "Fortune and Men's Eye's and Michael Greer" (July 1, 1971), writer Terry Alan Smith doesn't critique the film, he gushes over Greer.

"And goddam it, Michael Greer, I'm impressed with you again," Smith writes. "More than ever and in spite of myself. And because performers like you make my soul breathe, I love you with all my heart." 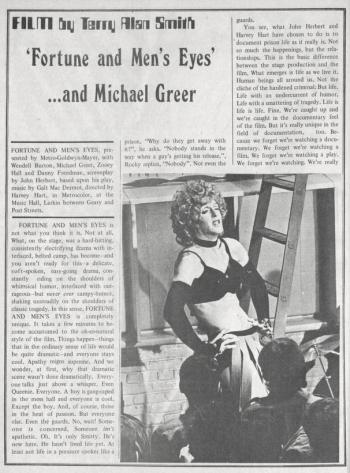 Why Smith didn't interview the actor is unknown, as he admitted that he knew Greer. But it wouldn't take long for the paper's reputation to grow and for celebrities to grant us interviews.

In 1975, writer Donald McLean sat down with Hollywood actress Barbara Rush, who, at the time, was fairly well known. Rush, who is still with us at age 94, first attracted attention when she starred in the science fiction classic It Came From Outer Space (1953), for which she won a Golden Globe. It was a carefree time, and so McLean and Rush kept things light. In "Meet Barbara Rush" (April 17, 1975), Rush addressed her age. 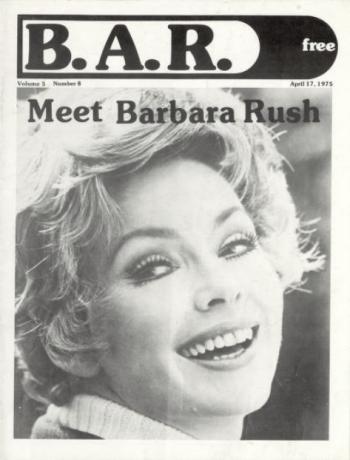 Paparazz-no
But not everyone sat down with the paper. In 1980, B.A.R. covered the annual dinner of the Harvey Milk Club. Special guests at the dinner were Hollywood superstar Jane Fonda and her then-husband Tom Hayden. In "Fonda/Hayden Toast Milk Dinner" (June 5, 1980) writer George Heymont covers the couple's appearance at the dinner, but for reasons unknown there was no accompanying interview. Still, it was quite progressive for Fonda to show support to the LGBT community in 1980, a time when LGBT people had yet to achieve acceptance by the majority of straight society. 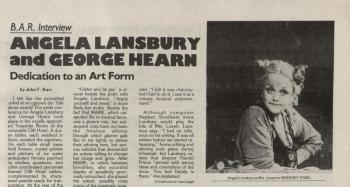 One major star who did speak to B.A.R. the following year was stage/screen/television star Angela Lansbury. Lansbury was then touring with George Hearn in the musical Sweeney Todd and the two held a press conference when they appeared in San Francisco. The conference was covered by prolific and legendary B.A.R. contributor John F. Karr, who Ms. Lansbury made a point of including. During the conference Lansbury acknowledged, and thanked, her gay fan base, something that not too many stars of that era did.

In "Dedication to an Art Form" (April 9, 1981), Lansbury recalled her 1970 film Something For Everyone, a very dark comedy which featured a gay character. The film, which may have been ahead of its time, was a flop, though it did achieve a cult status in the gay community.

"We thought we had a hit on our hands," Lansbury said. "And were quite surprised it wasn't. It would have been dead and buried without the gay community. Thank God for them." 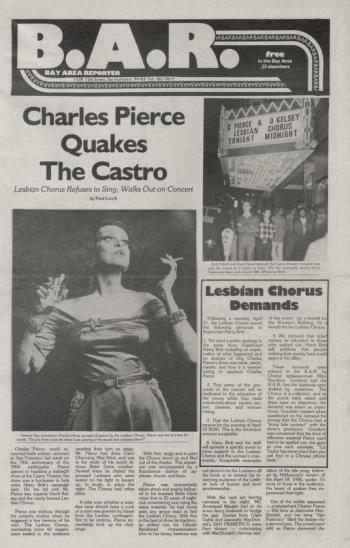 Pierce-ing wit
At least once a B.A.R. celebrity subject was engulfed in controversy. In 1980, a B.A.R. writer chatted with Charles Pierce, who was then the most famous female impersonator in the world. Pierce's impersonations of Hollywood's legendary ladies had brought him a huge crossover fan base, and he referred to himself as a "male actress."

That year, he performed at the Castro Theater in a fundraiser to help retire gay supervisor Harry Britt's campaign debt. Pierce had done Carol Channing and Mae West and was doing his Bette Davis impression, during which he incurred the wrath of lesbians when he cracked a joke about whether a weather vane should have a cock or a cunt. The Lesbian Chorus, which was also due to perform that night, got up and walked out.

In "Charles Pierce Quakes the Castro" (April 24 1980) Pierce questions if he's "too much" for women.

"Should I have been reading Keats or Shelley?" Pierce asks of writer Paul Lorch. "Or would they have me plunking a guitar in a folk dress with long stringy hair? No, my following wouldn't have been there if I changed to appease some group. They know over the years the content. That's why they came." 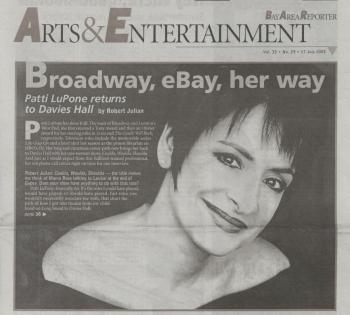 Legends and icons
Sometimes stars would open up about themselves when chatting with B.A.R.

In 1988, John Karr sat down with Broadway superstar Betty Buckley, who had won a Tony Award for her work in the musical Cats. Buckley had also co-starred in the classic horror film Carrie and in the hit late '70s TV series Eight is Enough. In "Taking Turns; Singers Buckley, Wilson" (October 27, 1988 ), Buckley spoke to Karr about her disappointment in not getting the lead role in the Broadway musical The Baker's Wife.

"I got the film Carrie instead," Buckley told Karr. "And my path became about film and television, which was great because it taught me to be a real actress, as opposed to being a singer who was an alright actress."

One celebrity even offered career advice to those who might be thinking about entering the business, as Broadway superstar Patti LuPone did when she spoke to Robert Julian in "Broadway, eBay, Her Way" (July 17, 2003).

"I'd suggest they pass the Bar exam so they can negotiate their own contracts," LuPone said. "Or have an alternative career."

Hollywood legend Debbie Reynolds didn't hold back when she spoke to the B.A.R. in conjunction with her July 2005 appearance at the Castro Theatre for one of impresario Marc Huestis' shows.

"They don't let you get older," Reynolds told Tavo Amador as she spoke about Hollywood's treatment of women. "Instead of being revered and respected, the way it is in England, you're discarded. Youth is everything."

Reynolds also dished some delicious dirt, as she recalled working with Oscar winner Shelley Winters in the 1971 chiller What's the Matter With Helen?

"Shelley is a tad to the wind and nearly killed me in real life during filming," Reynolds said. "I barely escaped alive." 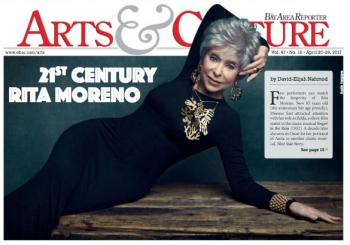 Starstruck
For this writer, working at the B.A.R. for the past 18 years has been a dream come true, as I often got to chat with my childhood idols. West Side Story has been my favorite musical ever since I first saw it way back in 1968. At the time I never imagined that I would actually meet and chat with the great Rita Moreno, who won an Oscar for her thrilling portrayal of Anita in the film. But chat with Moreno I did, when she performed at Feinstein's at the Nikko in 2017.

In "21st Century Rita Moreno" (April 19, 2017), Moreno told me how she felt when she won her Oscar more than a half century earlier. 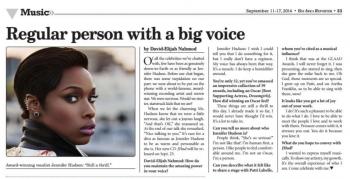 "I was beside myself," she said. "I thought Judy Garland would win for Judgment at Nuremberg. When my name was called I could not believe it! My mom was there, it was so wonderful!"

Moreno had also won a Tony Award for her work in The Ritz, a hilarious gay farce.

"My gay following started with The Ritz," she recalled. "I've always had gay friends. My best friend as a teen was Eddie, a gay Cuban kid. We would laugh and laugh. I'd love to see him now." 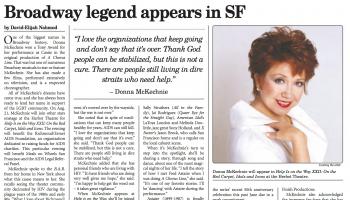 Sometimes it could be a little overwhelming to speak to a star if you were a big fan of theirs, as I found out when I chatted with Oscar winner Jennifer Hudson in 2014. In "Regular Person With a Big Voice" (September 11, 2014), I stammered a bit when I admitted to Ms. Hudson that I was a bit nervous.

"And that's okay," she reassured me.

At the end of our conversation Hudson said, "Nice talking to you." She is the only interviewee who ever said that to me.

I found it a real treat to chat with Donna McKechnie, who won a Tony Award for her work in the classic musical A Chorus Line, and who was also on Dark Shadows, my favorite TV show. In "Broadway Legend Appears in SF" (August 18, 2016 ), McKechnie gave me the best quote I ever received as she explained why she's a huge supporter of the LGBT community.

"I always felt privileged to be in a world that's so embracing," she said of the theater community. "People of all races and all persuasions. I feel happiest when I'm with people who are accepting. There's a lot of ignorance in the world. Being open and accepting is a very comfortable place to be." 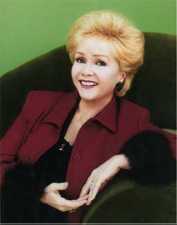 Debbie Reynolds, this is your life!