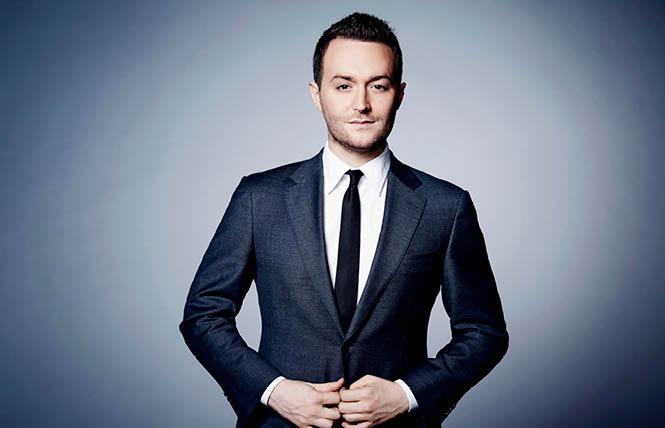 A gay CNN journalist's own surprises through an at-home DNA test pushed him into the world of podcasting, where he leads others through genealogical revelations.

Samuel Burke, who is currently stationed in London with CNN's overseas networks, is also planning a streaming series and book companions for "Suddenly Family," which became available for download February 18.

Burke told the Bay Area Reporter that he has been shaped by several DNA-based shockers.

"Growing up in Arizona, my dad had a cousin who disappeared in the 1980s," Burke said. "The family assumed he was gay and they tried writing but didn't hear back. Eventually, there was a conclusion he had probably died in the AIDS crisis and that was accepted as the narrative in our family."

This was seemingly confirmed in Burke's mind when, after having moved to New York City when he was older, he attended a service at a predominantly gay synagogue, where he was told that during the 1980s many Jewish AIDS victims didn't have anyone to say mourning prayers for them.

Burke had heard his cousin had lived in the Tri-State area before his death but there was no trace of him around.

"So when we took a DNA test, the first person to show up was dead cousin Jerry — very much alive," Burke explained.

Jerry Matten said he'd been outed as part of a blackmail scheme. He could not be reached for comment for this column.

"His stepmom blackmailed him for his father's money. ... His aunts had really treated him poorly after finding out he was gay and he decided to isolate himself," Burke said.

Another DNA surprise yielded a sister of Burke's mother who she had never met or heard of.

There are currently seven episodes available of the series, a collaboration between CNN Philippines and Burke's own Leumas Productions, on the Apple podcast platform (the fourth telling part of Burke's own story).

"It was quite shocking to get sent a message on Facebook from a beautiful young woman on April 7," Martinez told the B.A.R. "Having a daughter was the last thing I ever expected to hear, especially as a gay man. Now, we talk every day."

That woman, Alexandra Lovett, had spent years looking for her father, who as a child she had thought was dead. An Ancestry DNA test revealed Martinez as a 100% match.

"When Alexandra found me through the DNA match, she found my Facebook page before contacting me," Martinez explained. "She realized that not only am I gay, I'm married. She has two dads, and she said 'all my life, I've been looking for a dad. Now I get two for the price of one."

Martinez, who is originally from Colorado, had joined Ancestry to connect with his Native American roots. Now, he has had the chance to see his daughter twice in person.

"She spent two and a half days here in Santa Fe," Martinez said, before explaining that "on the third day, four of us drove to Denver so Alex could meet my mother and sister. This is my grandmother's first grandchild. She'd wanted one for so many years; never letting go that she never had a grandchild." On another occasion, Martinez flew to Lovett's home in Oregon to spend quality time getting to know her.

"In connecting with the past, he connected with the future," Burke commented.

Burke said the interviews have been rendered more authentic because of the pandemic restrictions. While people in the pre-COVID era would have had to go to a studio to record their stories, people now are recording interviews in their own homes via virtual technology.

Burke credited his time with CNN's Christiane Amanpour and gay anchor Anderson Cooper for imparting on him a love of storytelling.

"I'm always interested in storytelling, hearing people's stories," Burke said. "What I see is what we have in common is outweighed by the differences. In a way, I consider these people my family. Wolf has met my mom — the editor of my podcast — and has worked with my mom. The people in the podcast have become a kind of family and now are trying to see each other."