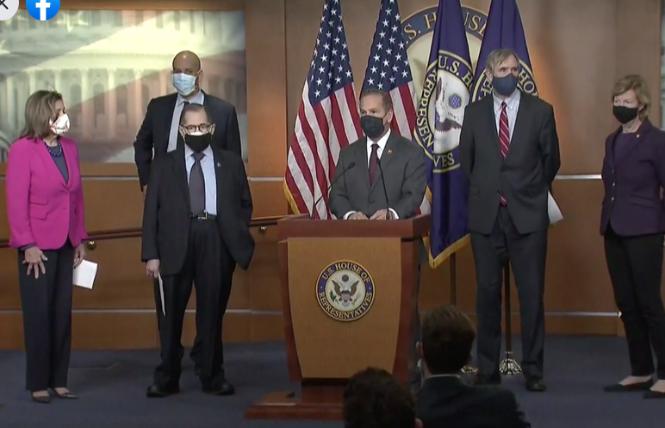 Congressman David Cicilline spoke at a February 25 news conference shortly before the House of Representatives voted to approve the Equality Act. Photo: Screengrab

The U.S. House of Representatives on Thursday approved a bill that would add sexual orientation and gender identity to the Civil Rights Act of 1964.

The Equality Act passed with a bipartisan vote of 224-206.

"This long overdue legislation will provide millions of LGBTQ Americans explicit protections from being denied medical care, fired from their jobs, or thrown out of their homes simply because of who they are," said Congressman Jerrold Nadler (D-New York) as he spoke in favor of the Equality Act. Republican Congressmen John Katko and Brian Fitzpatrick of New York and Pennsylvania, respectively, are among those who also backed the bill.

"We rise to tell our LGBTQIA community that not only do you matter, but you are loved and you are cared for," said Congresswoman Cori Bush (D-Missouri). "And we got your back."

Georgia Congresswoman Marjorie Taylor Greene (R) is among those who have expressed their strong opposition to the Equality Act. The Washington Blade earlier this week reported Congressman Chris Stewart (R-Utah) will reintroduce the Fairness for All Act that mainstream religious denominations support.

"This is a defining moment in our nation's political history and soon U.S. senators will decide their legacy on equality for LGBTQ people," said LGBTQ Victory Institute President Annise Parker in a statement. "History is not kind to those who oppose or filibuster civil rights legislation and excuses won't pass muster with future generations."

He added that the issue is no longer as divisive as it once was. He said that 83% of Americans support anti-discrimination legislation for LGBTQs, and that 63% of Republican voters do as well.

"This is not controversial anymore," he said.

Merkley said the Equality Act "is about freedom."

"Today, LGBTQs are not free — in 29 states today it is still legal to discriminate," he noted.

The February 25 vote is the second time the House has passed the Equality Act; it was first approved in 2019. But the Senate, under the control of then-Senate Majority Leader Mitch McConnell (R-Kentucky) never brought the bill up for a vote in the upper chamber.

"This year is different," Merkley said, noting new Senate Majority Leader Chuck Schumer (D-New York) supports the bill (and was at the news conference). He also said Biden supports the bill, another difference from 2019 when Donald Trump was in the White House.

It remains to be seen whether there are the 60 votes necessary in the Senate, which is split 50-50 between Democrats and Republicans. As the Blade reported last week, it is a heavier lift in that chamber, where Senator Mitt Romney (D-Utah) announced he will oppose the bill. It is unclear where some other Republican senators stand on the issue.

Nonetheless, LGBTQ leaders were pleased with the House vote.

Mayor Todd Gloria, a gay man and the first elected LGBTQ mayor of America's eighth largest city, said the House vote "marks a historic step forward for the civil rights of LGBTQ+ people in this country and brings us one step closer to actualizing true equality in our nation."

"The Equality Act codifies long overdue protections to members of the LGBTQ+ community and sends a very clear message: no one should experience discrimination because of who they are or who they love," he stated. "I urge the Senate to expeditiously pass this critically important legislation."

Imani Rupert-Gordon, executive director of the National Center for Lesbian Rights, hailed the fact that the Equality Act drew votes from Democrats and Republicans.

"Today's bipartisan passage of the Equality Act is the result of decades of hard-fought activism by women, people of color, and the LGBTQ community — particularly transgender individuals of color — to ensure that no American faces discrimination based on their sex, gender, race, ethnicity, sexual orientation, or gender identity," Rupert-Gordon stated. "The historic vote today also builds upon the legacy of the activists who helped pass the original Civil Rights Act in 1964.

"While today is a day of celebration for this momentous accomplishment, it is also a reminder that there is much work that must be done to ensure the Equality Act is passed swiftly in the United States Senate and signed into law by President Joe Biden. While the fight for full legal equality continues, NCLR is heartened to once again see the Equality Act progress in the halls of Congress."

The Human Rights Campaign, the nation's largest LGBTQ rights organization that has spent decades working on federal LGBTQ non-discrimination law only to see it falter, said the House vote was a "milestone," given the political changes in the Senate and White House.

"Today's vote is a major milestone for equality bringing us closer to ensuring that every person is treated equally under the law," stated HRC President Alphonso David. "The Equality Act has broad support from 70% of voters, hundreds of elected officials nationwide and an unprecedented number of businesses who believe that not only is achieving equality the right thing to do, it is a unifying issue for our nation.

"The Human Rights Campaign thanks the U.S. House of Representatives under Speaker Nancy Pelosi's leadership for its commitment to LGBTQ equality and advancing this legislation forward on behalf of all Americans," David added. "Now, the ball is in the Senate's court to pass the Equality Act and finally allow LGBTQ Americans the ability to live their lives free from discrimination."

The Log Cabin Republicans, on the other hand, opposes the bill.

"We opposed this legislation in the past, and we oppose it as it stands today," Charles Moran, Log Cabin managing director, stated in a news release shortly before the vote. "This is a partisan piece of legislation — it has no Republican co-sponsors in the House. And the insidious nature of the extreme changes it will make would irreparably harm America and all of the accomplishments we've worked so hard for over the last few decades.

"Let me be clear — Log Cabin Republicans is not now, nor will it ever retreat on our commitment for equality for the LGBT community — the transgender community included," Moran stated. "We stand for protections in employment, access to quality health care, and equal protection under the law for our trans brothers and sisters.

"But the so-called Equality Act goes to an extreme level to eliminate the concept of gender, which is absurd, dangerous, and way out of the mainstream," he added.

The Bay Area Reporter contributed to this article.

Updated, 2/25/21: This article has been updated with reactions from LGBTQ leaders.

Editorial: Let's get real about Equality Act
Sign up!