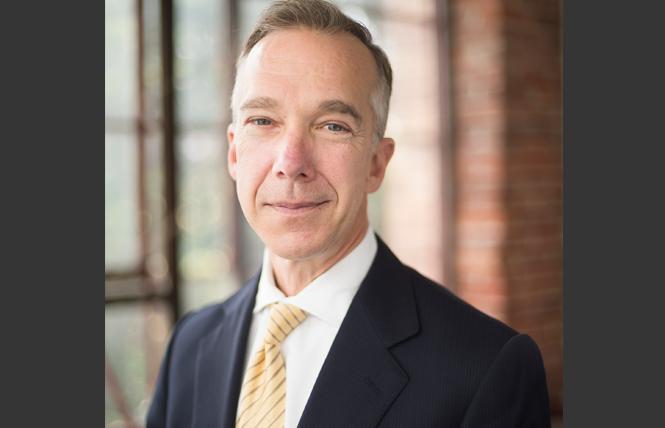 A $1 million commitment from the Saint Francis Foundation is helping to support the Gender Institute for San Francisco's trans and gender-nonconforming populations at the hospital it serves.

Mark Ryle, a gay man who is the president of the foundation, touted that — and a recent profile in Forbes magazine — in an interview with the Bay Area Reporter.

"We've committed $1 million directly to the Gender Institute and ... added another $300,000 in a grant to [the San Francisco Community Health Center] as our community partner in the program (they are developing a program for our patients post discharge)," Ryle recently stated to the B.A.R. "We also funded $1.7 million to acquire a da Vinci Xi robot to perform the very intricate vaginoplasty and phalloplasty work."

The budget of the Gender Institute is estimated to be $1.6 million per year, Ryle stated.

Longtime B.A.R. readers may recall Ryle from his days as the CEO of Project Open Hand, a nonprofit that provides meals to seniors and people with illnesses. He became president of the Saint Francis Foundation in March 2019.

The foundation provides grants to the eponymous hospital in Lower Nob Hill, where the Gender Institute is located. It also funds local nonprofits like the San Francisco AIDS Foundation and the San Francisco Community Health Center, formerly known as API Wellness.

Ryle said that the foundation has given over $150 million to the community and the hospital since its founding in 1948.

"We don't separate it out because the health of the community is what we're investing in," he said.

"In 1973, Saint Francis Memorial started doing gender realignment, so this is not new," Ryle said. "A hospital on the Westside of San Francisco turned a patient away the day of their surgery. That's who Saint Francis is — doing this kind of work for almost 50 years."

Those decades of work gave the hospital institutional knowledge and memory to get better and better, Ryle said.

The Gender Institute was founded in 2016, spearheaded by Dr. Kathleen Jordan, a straight ally, who until last year was the chief medical officer of Saint Francis Memorial.

"The Gender Institute was more recent, but we have always played a role," she said. "We'd always been a part of that community, but we formalized it, made it more purposeful and made an effort to be more comprehensive based on acute needs."

Jordan said she penned the charter of the institute and put together an advisory group, as well as chairing the committee for the first two years. She also helped to put the institute on the map by organizing its first conference on gender confirmation surgery two years ago.

Broad support
The foundation held a virtual fundraiser to raise money for the institute, among other units and centers at Saint Francis Memorial, last December, which featured Governor Gavin Newsom and Toni Newman, a trans woman who is the executive director of the Lavender Youth Recreation and Information Center.

"I spoke at their gala ... and I was asked by Mark Ryle to advise when they first started discussing the Gender Institute," Newman wrote in an email to the B.A.R. "I support the institute because they are providing top medical services (all around care) to TGNC individuals. St. Francis Hospital is a top hospital and offers to provide services to TGNC individuals with limited resources."

Dr. Heidi Wittenberg, a straight ally, took over at the institute last July. Wittenberg stated that the pandemic has "stalled a lot of our plans."

"We currently have 17 surgeons whose practices are 100% dedicated to transgender and gender diverse patients," Wittenberg wrote. "These are experienced well-known surgeons with multiple specialties. Currently SFMH has one of the highest volumes of experienced surgeons in the United States for transgender and gender diverse patients. Patients are not only local and national but international. The institute has diligently created and continues to ensure a safe environment for our patients from registration to discharge."

Wittenberg went on to state several of her major initiatives for the institute, which include: creating a more expansive center for patients; keeping the community involved by including them on operating committees; hiring a "dedicated patient navigator" to help patients with specific needs and issues; having a space for patients to access social services and educational materials; expanding the website; involving "more endocrinologists, primary care providers, and mental health providers;" and providing more needed services, such as hair removal.

Dr. Samantha Mason, D.O., a trans woman who is a hospitalist at Saint Francis Memorial, moved to the city three years ago.

"One of my several reasons for wanting to be in San Francisco was after learning of the gender program at Saint Francis that was at the time, in the works several years ago," Mason stated. "I'm very happy to be a part of it now as the access and availability of trans-friendly health care is still very lacking in the U.S. right now. If we can be a part of making that better, then that's what I want to be a part of as well."

Mason wrote that one of her goals is to make the environment of the institute as welcoming as possible as a member of the transgender operations committee.

"There are a lot of moving parts once a patient is admitted and we have attempted to make this a place of excellence with increased compassion and awareness of transgender issues," Mason wrote. "Occasionally, we still find issues that we must tackle and the operations committee is a big part of making those changes happen. Personally, I would love to see the Gender Institute expand beyond just our inpatient services and care, but also to following patients on the outpatient basis and management of their transition. Maybe this can be a goal down the road as we still have plenty to work on here in the hospital."

According to its IRS Form 990 for Fiscal Year 2018-2019, which is the most recent that is publicly available, the Saint Francis Foundation spent $5.8 million that year, including $3.3 million given in "grants and similar amounts paid." The foundation raised $1.2 million but made an additional $3 million from investments.

Correction: the original version of this story omitted Samantha Mason's title of doctor. We regret the error.