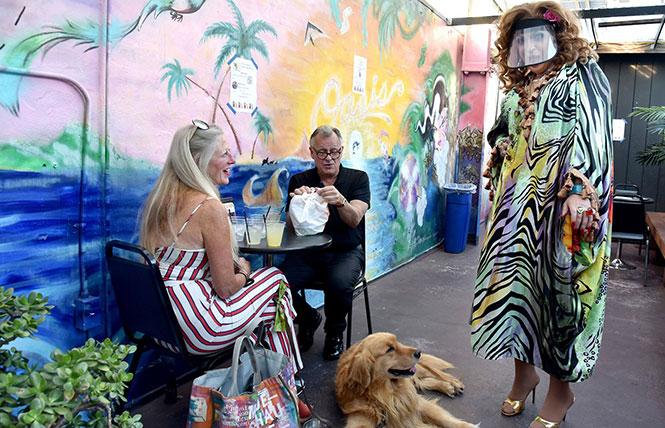 Now that the San Francisco Board of Supervisors has unanimously passed District 6 Supervisor Matt Haney's Music and Entertainment Venue Recovery Fund, his legislative aide is hopeful that beleaguered venues can start getting help next month.

Haney is trying to identify $1.5 million that can be used for the fund, according to a news release from his office.

"I am hopeful that we will be able to allocate the money and get the fund up and running by the end of March," Honey Mahogany, a queer nonbinary trans person who is the chief legislative aide for Haney, stated to the Bay Area Reporter. "That is just a guess, it could happen sooner."

As the B.A.R. previously reported, Haney introduced the fund late last year after lobbying from entertainment venue owners, including some members of the Stud Collective that used to run the now-shuttered space at 399 Ninth Street. Haney represents the South of Market neighborhood, which includes the Leather and LGBTQ Cultural District and a handful of storied queer venues. (Mahogany is a member of the Stud Collective.)

The cultural district did not respond to a request for comment as of press time.

The Board of Supervisors approved the fund for a final time February 23.

"It's a good day for our city and for our city's nightlife community. We are creating a fund that will provide relief, at a time when our venues need it the most," Haney stated in a news release. "Saving our entertainment venues is an important part of making sure our city is going to be able to bounce back from this pandemic, and with the San Francisco Music and Entertainment Venue Recovery Fund, we are giving our venues a fighting chance."

The release also included comments from Maria Davis, who is part of the Stud Collective and also the owner of St. Mary's Pub in the Bernal Heights neighborhood. Davis is a member of both the San Francisco Venue Coalition and the Independent Venues Alliance.

"This is a huge first step," Davis stated. "We are so grateful to Supervisor Haney and the entire Board of Supervisors for acknowledging the importance of our live entertainment venues by creating this fund, as well as to Mayor [London] Breed for her ongoing support of our industry."

Mahogany stated that Haney is working with the city controller to get the fund up and running.

"We believe the [$]1.5 [million] can help 15-30 venues, depending on the need," Mahogany stated. "The [$]1.5 [million] is just a starting amount, and the goal is to find more money through a variety of avenues including fundraising from the private sector."

When he spoke to the B.A.R. last month, Drollinger said that $10-$15 million would be useful if the fund is geared toward helping smaller venues.

"I am so happy that Supervisor Haney's nightlife fund passed," Drollinger added. "There are many venues like Oasis that have been really struggling and will ultimately be the last to open. I am part of the [Independent Venue Alliance]. I know first hand so many of the small venues struggle. We not only need to pay the mountain of debt that we've accrued, but also need support weathering the next 4-8 months until we can finally open."

Some $1.5 million was already provided to the entertainment industry by Breed's San Francisco Relief Grant program. Last month $5 million in fee and tax waivers (including $2.5 million for businesses with a place of entertainment permit) passed the board after having been introduced by gay District 8 Supervisor Rafael Mandelman.

The financial relief is coming too late for the queer-owned nightlife venue Virgil's Sea Room. The Mission district bar adjacent to another queer-owned entertainment spot, El Rio, announced February 22 "with great sadness and a heavy heart" that it was closing its doors.

"We are another victim of the times. After a year of constant loss, not enough help from the feds, and a mental fatigue that can't quite be described ... Virgil's has made the tough decision to close," read a post on Virgil's Facebook account.