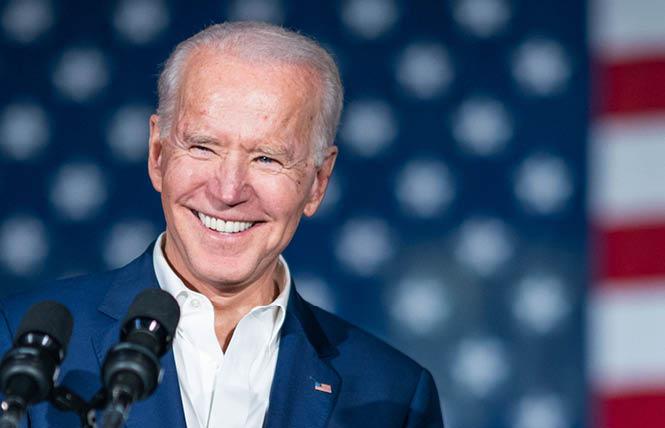 President Joe Biden's administration has started applying the U.S. Supreme Court's Bostock decision to federal agencies, the first of which is the Department of Housing and Urban Development. Photo: The White House

LGBTQ advocates are praising the Biden administration's Housing and Urban Development Department for interpreting the Fair Housing Act to prohibit discrimination on the basis of sexual orientation and gender identity.

"Lambda Legal applauds this step by the Biden administration to make the promise of equal housing opportunity real for LGBTQ people across the country," Karen Loewy, senior counsel and senior strategist with Lambda Legal Defense and Education Fund, stated February 11. "As our housing work has demonstrated and the Bostock decision confirmed, the harassment and discrimination that LGBTQ people face in housing are forms of sex discrimination that federal law will not tolerate. These actions by [the U.S. Department of Housing and Urban Development] will both prevent future discrimination and ensure that those who have experienced discrimination have a clear avenue for relief."

Last June the U.S. Supreme Court, in Bostock v. Clayton County, ruled 6-3 that a federal law — Title VII of the Civil Rights Act of 1964 — that bars discrimination on the basis of "sex," also prohibits discrimination based on sexual orientation and gender identity. HUD is the first federal agency to apply the decision, which was included among President Joe Biden's first executive orders last month.

Lambda Legal had been involved with a number of cases on housing discrimination against LGBTQs based on the Fair Housing Act, including Smith v. Avanti — a federal lawsuit filed in Colorado against a property owner who refused to rent a housing unit she owned to a same-sex couple, one of whom is trans, and their children.

In another case, Wetzel v. Glen St. Andrew Living Community, the 7th U.S. Circuit Court of Appeals issued a ruling stating the Fair Housing Act was violated when a tenant was not protected from harassment and discrimination from other tenants on the basis of her sex and sexual orientation.

"For too long, LGBTQ Americans have faced rampant discrimination in housing and shelter," Ellis stated. "Whether being turned away by landlords, mortgage lenders, or shelters, anti-LGBTQ discrimination has largely gone unchecked in the majority of U.S. states that have no laws protecting our community from housing discrimination. Rates of poverty and homelessness are higher for LGBTQ people, and HUD's move to offer protections is direly needed to ensure our community's safety and well-being."

During a February 19 call with the Bay Area Reporter, representatives of Equality California said it was refreshing after four years of the Trump administration chipping away at the LGBTQ protections offered by executive branch agencies.

"It's certainly something we were heavily involved in during the Trump administration, when they tried to roll back protections from HUD," Samuel Garrett-Pate, the communications director for EQCA, said. "It's good to see this administration taking proactive steps early on, without being asked."

"HUD is the first agency to enforce Biden's executive order through the Bostock decision," he said, adding that he is "very excited."

That executive order, as the B.A.R. previously reported, was signed by Biden shortly after his January 20 inauguration.

In order to enforce that order, HUD issued a memorandum February 11 "stating that HUD interprets the Fair Housing Act to bar discrimination on the basis of sexual orientation and gender identity and directing HUD offices and recipients of HUD funds to enforce the Act accordingly," according to a news release.

The current head of HUD, Matthew E. Ammon, is holding the place for Congresswoman Marcia Fudge (D-Ohio), whom Biden has nominated to be HUD secretary. Fudge has yet to be confirmed by the Senate or resign from her seat in the House of Representatives.

The previous head of HUD under former President Donald Trump, Dr. Ben Carson, had been one of Trump's 2016 Republican primary opponents. Carson had been widely criticized as homophobic, saying in a 2015 TV interview that "a lot of people who go into prison go into prison straight and when they come out, they're gay." (He later apologized for those remarks, though he reiterated his opposition to same-sex marriage.)

Carson proposed and oversaw a change to the Equal Access Rule in July 2020, unaffected by this memorandum, that directs shelters to make their own determinations regarding accepting people on the basis of gender identity.

The Fair Housing Act of 1968, like the Civil Rights Act of 1964 that was the basis of the Bostock decision, was initially passed by Congress as a result of civil rights advocacy primarily on behalf of Black Americans. It prohibits discrimination on the basis of race, religion, national origin or sex in the rental, sale or financing of housing.

"Housing discrimination on the basis of sexual orientation and gender identity demands urgent enforcement action," said FHEO Acting Assistant Secretary Jeanine M. Worden stated in the release. "That is why HUD, under the Biden administration, will fully enforce the Fair Housing Act to prohibit discrimination on the basis of gender identity or sexual orientation. Every person should be able to secure a roof over their head free from discrimination, and the action we are taking today will move us closer to that goal."

People who believe they have experienced housing discrimination should contact the FHEO at (800) 669-9777, or online.