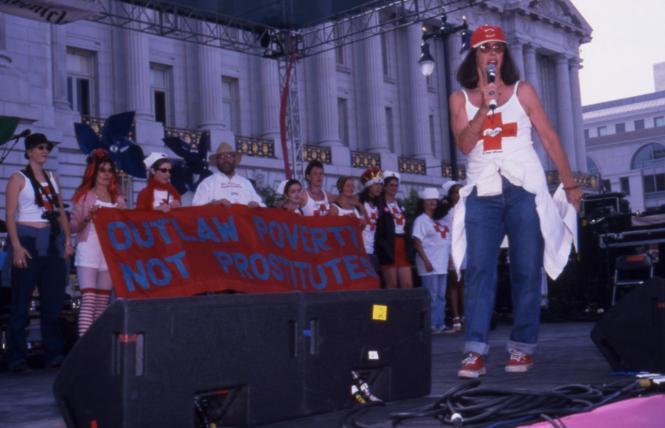 The San Francisco Board of Supervisors has declared that this year, Valentine's Day will be "Margo St. James Day" in honor of the sex workers rights advocate who died last month.

Friends are also planning an online celebration of St. James' life this spring.

St. James died January 11 in Washington state, where she had been living in a memory care facility before being moved to hospice. She was 83.

St. James, who founded the prostitutes' rights organization COYOTE (Call Off Your Old Tired Ethics), and later the St. James Infirmary, was honored by the San Francisco Board of Supervisors at its January 26 board meeting.

"It was important to declare Margo St. James Day in memory of a truly extraordinary woman who dared to champion the cause of sex worker rights, who fought fiercely and effectively for women's liberation, and who in doing so changed not just our city but our world. Margo was one of the great San Franciscans of the last half century," stated gay District 8 Supervisor Rafael Mandelman.

St. James Infirmary is the first-of-its-kind occupational health and safety clinic for sex workers. St. James founded it with Johanna Breyer and Dawn Passar, both of the Exotic Dancer's Alliance, in collaboration with the San Francisco Department of Public Health. It opened in 1999.

Although it is unclear whether St. James self-identified as bisexual or lesbian, she had both female and male lovers, including a decade-long relationship with Gail Pheterson, an academic researcher and sex work activist, as the Bay Area Reporter noted in an obituary.

Veronica Vera, writer and former member of PONY (Prostitutes of New York) said of San Francisco's "re-naming" of Valentine's Day, "Margo turned St. Valentine's Day into a celebration of women's liberty. She used the joy of the day to draw back the curtain on laws that marginalized mainly women. It's taken all these years but look at what the New York State Legislature finally did — they repealed a law that sanctioned arresting people for standing on the street. Margo championed the disparity in bad laws starting on Mother's Day, 1973 when she founded COYOTE."

Anita O'Shea, operations director for St. James Infirmary, also announced that a celebration of St. James' life is planned for May 1. O'Shea said of the event, "As Margo would say, 'We want everyone to come.'" The online event will begin at 11 a.m. Pacific Time. More details will appear on the St. James Infirmary website.

The Board of Supervisor's resolution declaring February 14 St. James Day in San Francisco can be found here.