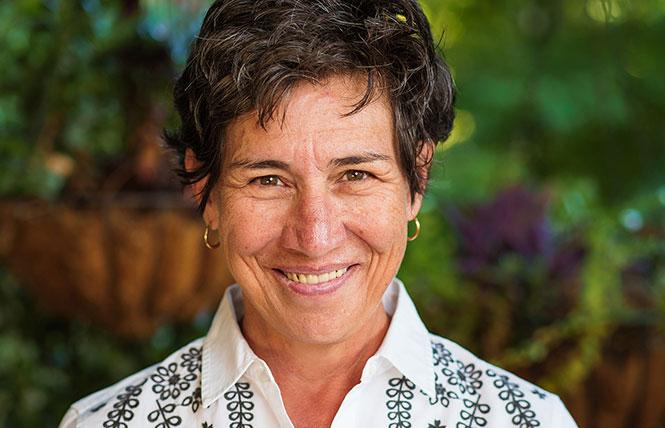 Following her election in November to the state Legislature's upper chamber, Senator Susan Talamantes Eggman (D-Stockton) made history as the first lesbian of color to serve in the Senate. But due to the eight years she spent as an assemblywoman, Eggman can only serve one four-year term in the Senate under California's term limit rules for legislators.

And Eggman plans to make the most of her time as a state senator. She is chairing the Senate's budget subcommittee #3 on health and human services and serving on the budget and fiscal review committee. She also is a member of the agriculture and natural resources and water committees, two key issues in her Central Valley district.

"We need to take a hard look to make sure we are meeting people's basic needs," said Eggman of the Legislature's immediate focus as it deals with the repercussions of the COVID pandemic, now entering its second year.

Her legislative priorities include improving mental health services, allowing counties to open safe injection sites, and seeing a state university be built in Stockton. Eggman has long pushed to see that the city's current satellite location for California State University, Stanislaus, located in Turlock, be turned into a full-fledged campus of its own.

Despite a state report released last year that concluded doing so wasn't feasible, Eggman told the Bay Area Reporter she isn't giving up on the idea. She noted a state university could not only help revitalize Stockton's downtown core, it also could rectify the state's lack of investment in higher education in San Joaquin County compared to the resources funneled toward incarceration facilities in the area.

"It is a huge issue of equity," argued Eggman. "We are the largest city in the state of California without a four-year public university."

While no such educational offering exists within 50 miles of Stockton, Eggman pointed out there are four prisons within that parameter. Located by the state's Delta water system and vast agricultural holdings, a CSU Stockton campus could be the agricultural and environmental equivalent to the state's Cal Poly, the engineering-focused university in San Luis Obispo.

"No CSU is focused on that," she said. "Stockton would be a fantastic place for it. We have the port and rail connections and have the space for it."

Eggman also isn't backing down from allowing the first safe injection sites for IV drug users to open in California. Despite the bills she and gay state Senator Scott Wiener (D-San Francisco) have co-authored always hitting legislative roadblocks in the past, the two lawmakers remain hopeful they will be able to pass the legislation this year. Their Senate Bill 57 would allow for such facilities to open in San Francisco, Oakland, and Los Angeles.

"I think we have a real shot," Wiener told the B.A.R., pointing out that the Los Angeles County Board of Supervisors' unanimous, bipartisan backing for the bill will be "impactful" as they seek support from their legislative colleagues.

The two out lawmakers often team up on mental health and addiction issues, noted Wiener. Thus, having Eggman now as a Senate colleague "is fantastic," he said. "She is super energetic and thoughtful. She is great to work with."

First out legislator in Central Valley
Elected by the eight-member Legislative LGBTQ Caucus as its vice chair this year, Eggman will become chair during her last two years in the Legislature. Both Eggman and lesbian Senate President pro Tempore Toni Atkins (D-San Diego) will be termed out of office in 2024, leading to the prospect of having no out women in the state Senate.

"I am a huge fan of pro tem Atkins and look forward to working with her closely and making these next four years work as best as we can," said Eggman, 59, who also has the distinction of being the state's first out Latina legislator and first LGBTQ caucus member from the Central Valley.

Seeing she isn't the last out woman of color serving in the Senate is top of mind for Eggman. She told the B.A.R. during a recent Zoom interview that recruiting diverse LGBTQ candidates, particularly those from more rural and suburban parts of the Golden State, would be front-and-center for her during both the 2022 and 2024 election cycles.

"When we had our caucus meeting last week, I said we need to continue to work on our diversity as it relates to women, particularly women of color, and our trans brothers and sisters," said Eggman.

There has yet to be a trans legislator elected in California, and only last year did the first bisexual member of the caucus win election: Assemblyman Alex Lee (D-San Jose). He is one of two Asian LGBTQ caucus members, while Eggman is one of two Latina members.

As for her breaking through a pink political ceiling with her election, Eggman told the B.A.R., "I certainly acknowledge it. I think there has been a lot more attention to it outside the building than inside the building. Inside, I am working to get the job done."

Asked what her own next political campaign would be, Eggman told the B.A.R. she is "leaving all options on the table" for now. She has yet to open a campaign account for a statewide office, which is typical of termed out lawmakers who need to have a place to bank contributions.

"My wife said we have to open one," Eggman noted.

Culinary diplomacy served a loaf at a time
One way she has been building rapport with her new Senate colleagues is baking them each a loaf of bread. Long a talented cook and griller, Eggman tried her hand at crafting bread at the beginning of the COVID pandemic and soon developed a knack with dough. (Followers of her Facebook page have borne witness to her culinary skills.)

"I saw people starting with their own sourdough cultures, and I always loved bread, so I gave it a try," she said. "I now have my own Stockton culture I grew right here."

As a caregiver for her wife, Renee Hall, who has dealt with serious health issues for years, including spinal cord/brain surgery four years ago to remove a tumor, and a co-parent to their daughter, Eme, Eggman said the process of making bread helps relax her.

"I have enjoyed the process with my hands, heart, eyes, and nose," she said. "It is a full body experience, which I appreciate."

She started out leaving loaves on the porches of other female caregivers who are her neighbors. Eggman is now working through the list of her Senate colleagues to deliver each one of her homemade breads. Working first through her Democratic counterparts, Eggman plans to then focus on the other side of the aisle and then likely members of the Assembly, just as her bills come up for votes, she joked.

"I love giving it away. Bread is life. I am hokey and a real servant at heart," said Eggman, who served as a medic in the Army and formerly worked as a mental health provider and medical social worker. "I love to feed people; it is the ultimate act of nurturing."

Eggman isn't the only out lawmaker using culinary diplomacy. The day she spoke to the B.A.R. last week, she had been gifted with a nice bottle of champagne and a homemade pie by Atkins.

"How can it get better?" Eggman said she asked her wife that morning when she walked in the door. "I like the Senate; I like the collegiality of it. There is something to be said about having half the amount of people. It is a more deliberative process."

As for the rye bread she delivered to Wiener late last month?

Web Extra: For more queer political news, be sure to check http://www.ebar.com Monday mornings for Political Notes, the notebook's online companion. This week's column reported on a Bay Area LGBTQ Asian and Pacific Islander group's backing of Assemblyman Rob Bonta (D-Oakland), a straight ally, to be California's next attorney general.