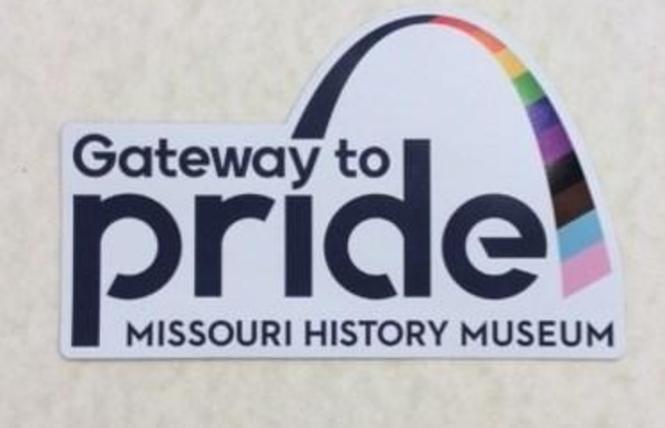 San Francisco may be more than 2,000 miles from St. Louis, but a new history project is revealing the many ties between the LGBTQ communities in California and Missouri.

It doesn't take long when delving into the Missouri Historical Society's new virtual "Gateway to Pride" exhibit it launched in late January to discover connections to the Golden State. One of the timeline entries notes how in spring 1988 the AIDS quilt, created by the San Francisco-based Names Project, was exhibited for the first time in St. Louis. 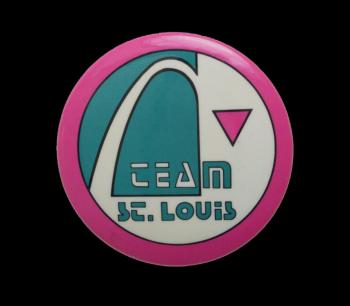 Among the digitized ephemera displayed is a Team Saint Louis button from the 1990 Gay Games held in Vancouver, British Columbia that year with a citation noting how the quadrennial LGBTQ sports event was launched in San Francisco.

"Founded in 1982 by Kris Kleindienst, Deke Law, and Sue Hyde, Team Saint Louis sent athletes to the first-ever Gay Games, then known as the Gay Olympics, held in San Francisco that year," notes the online description that accompanies the button photo under the exhibit's "Collections" section on the website.

Also included is a copy of a Kiel Opera House poster for the October 26, 1984 concert by lesbian singer and activist Holly Near and folk singer Ronnie Gilbert. The California-born Near, who lives in the North Bay, and Gilbert had teamed up for a 25-day "Defeat Reagan" national concert tour ahead of that fall's presidential election.

Under the header of "HIV/AIDS" is an image of an "I'm Straight But Not Narrow" pin donated by Mayer and Pat Levy, who lost their son Michael to the deadly epidemic in 1987. They had flown to the UC Irvine Medical Center to be by their son's bedside, as detailed in an interview the couple gave that is linked to by the archival exhibit.

"We went to more funerals in 10 years than most people do in 10 lifetimes," said Pat Levy, who with her husband worked to educate people about the disease through the group St. Louis Effort for AIDS.

Speaking via Zoom with the Bay Area Reporter January 29, curator Sharon Smith noted that both of the country's coasts have influenced St. Louis history just as the Middle-America metropolis has impacted its municipal counterparts in the West and East.

"They inform us and we inform them," said Smith, 63, a lesbian who has worked for more than three decades at the Missouri Historical Society. "People we have interviewed lived in St. Louis and left to go to California for various reasons."

Steven Brawley, 55, a gay man who collaborated with Smith and her colleagues on the virtual exhibit, noted in their joint virtual interview with the B.A.R. that back in the 1970s, several of his friends from the St. Louis area left to live either in New York or San Francisco.

"You might go to a place that might be more accepting or have more folks like you who were open," recalled Brawley, who has lived his entire life in the St. Louis metro region. "Some of my friends left here in the 1970s and went to live in California, some have come back. They left St. Louis because it was too conservative or not a good fit for them. I think that is true across Middle America; people leaving and going someplace to be themselves."

In 2007, Brawley started the St. Louis LGBT History Project as a LiveJournal blog in order to preserve archival materials related to and record oral histories about his native city's LGBTQ community. He found impetus for the project from the deaths of several of his friends and didn't want to see the items they had collected or their lived experiences to be lost.

"They always told me these amazing stories, and I was always intrigued. I said we need to start recording these stories and preserving this history," recalled Brawley, whose LGBTQ archival collection is now housed in the basement of his suburban home. "As more and more friends died I said something has to be done because this is going to keep happening."

His work soon came to the attention of the Missouri Historical Society, which reached out to Brawley eight years ago as it was planning an exhibit to celebrate St. Louis' 250th anniversary in 2014. He told the B.A.R. he was happy to partner with it as he didn't see much sense in creating a separate LGBTQ historical archive in the city.

"The museum is a key partner with the project. We've been working together with it since the 250th birthday exhibit," said Brawley. "That was our first venture and we have been thick as thieves ever since."

That collaboration led to talks about mounting a show specifically about the city's LGBTQ community, a project that Brawley serves on the advisory board that has provided input for the exhibit.

"We've been to his basement quite often," Smith said of the curating team as it looked for items to highlight in the exhibit. "When we weren't at the table yet and we weren't in a place thinking about preserving this community's stories and artifacts, Steven was there. We are really fortunate to have someone in St. Louis that has done that for a number of years."

Exhibit goes virtual
Initially, the "Gateway to Pride" exhibit was to be a small show installed last June in an atrium space inside the Missouri History Museum to coincide with Pride Month. But the COVID pandemic upended those plans, as the educational institution was forced to close last March due to the health crisis.

It took several months for the curating team to regroup and pivot to mounting the exhibit online. Their disappointment gave way to the realization that what would only have been seen by the local community over a brief six-month window can now be accessed by anyone with a computer connection around the world. The museum has yet to decide when, or if, the online exhibit will close.

"I realized it was a blessing in disguise after I got done crying," acknowledged Smith.

Brawley already has seen people outside of the immediate area talking about the virtual exhibit on social media.

"I think it is going to be dynamite," he said. "It is probably a blessing and hidden outcome we hadn't planned on."

It is part of the historical society's Gateway to Pride Initiative it kicked off in 2015 to ensure it was telling the story of the LGBTQIA+ communities in the St. Louis region and preserving its history. The staff has been collecting oral histories and seeking artifacts, photographs, papers, and more to add to the permanent collections, which are made available to community members and researchers.

"What it was intended to do — and still is — is a call to action to the community to understand what the Gateway to Pride Initiative is, and how we could use grassroots community involvement to help us build the collection," explained Smith.

With the launch of the virtual exhibit, which includes much lesbian and gay male history for St. Louis, the curators are hoping to hear from more bisexual, transgender and intersex people. They are also eager to connect with the region's various racial and ethnic LGBTQ communities and hope people of color will submit their oral histories via the exhibit website.

"We want their voice to be heard and for their story to be heard," said Brawley. "We don't want for the museum to go tell their story for them, but for them to be part of the storytelling."

It is all working toward the mounting of a major 6,000 square foot exhibit on St. Louis's diverse LGBTQIA+ history in 2024. The museum expects it will open sometime that summer ahead of the 10th anniversary of a federal court ruling that allowed same-sex couples in the Show Me State to marry in November 2014.

The exhibit will run through the summer of 2025, which will mark the 10th anniversary of marriage equality becoming the law of the land throughout the U.S. due to the Supreme Court's Obergefell v. Hodges decision.

"Historical societies are notorious for seeming like they are a rich white organization in the past. We have done everything we possibly can to eradicate that and to help our members, our community understand we are supportive of every ethnicity and way you identify," said Smith. "That is how we tell the story of St. Louis. It is a rich fabric, and we have all those stories to include."

To view the virtual "Gateway to Pride" exhibit and learn more about the efforts to preserve LGBTQ history in St. Louis, click here. On some browsers the screen may need to be made smaller in order to access the exhibit's interactive timeline.