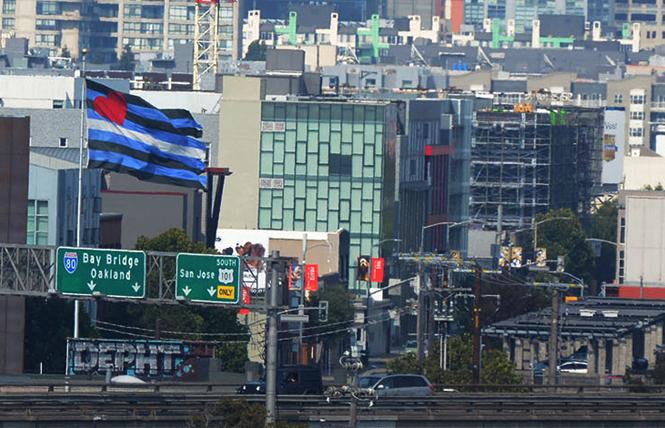 The SOMA district could see a boost with the landmarking of the Eagle bar and new rules allowing bathhouses to reopen. Photo: Rick Gerharter

The giant leather pride flag that flew over the nearly finished Eagle Plaza in San Francisco's South of Market neighborhood was so frayed by the wind that it was quietly removed late last year.

The shredded fabric was an apt symbol for the battering the area's Leather and LGBTQ Cultural District experienced itself in 2020. The COVID-19 pandemic decimated the finances of numerous LGBTQ businesses in SOMA, with bars forced to close, restaurants required to end indoor dining, and stores ordered to reduce shopper capacity.

The Stud nightclub turned into a virtual entertainment venue in hopes of one day opening in a new brick-and-mortar space. Blowbuddies, the area's last remaining sex club, shuttered for good as the health crisis wiped out its business.

Just as the leather enclave weathered the AIDS epidemic, SOMA boosters are confident the neighborhood will also survive the COVID pandemic. Their confidence has been boosted by city officials' efforts to bring back traditional gay bathhouses to San Francisco and to landmark the Eagle bar, a beloved gay-owned institution and focal point of the SOMA LGBTQ district.

The supervisors' land use and transportation committee unanimously voted 3-0 January 25 in support of having the city's historic preservation commission consider if the Eagle bar should be designated a city landmark. It would be the third gay bar location in San Francisco given such status if approved, and the first LGBTQ city landmark located in SOMA and related to queer leather culture.

Pushed by District 6 Supervisor Matt Haney, should the full Board of Supervisors vote next month in support of starting the landmark process then the historic preservation commission would have 90 days to take up the matter. Following its decision, the supervisors would need to vote on officially designating the bar at 398 12th Street a local landmark.

"We have endured through hard times and bringing the community back together. As a person and San Franciscan I want to point out the importance of the bar and its mission," Lex Montiel, who reopened the bar in March 2013 with his late business partner, Mike Leon, told the supervisors committee Monday.

New bathhouse rules
Meanwhile, the city's public health department has rescinded restrictions that kept traditional gay bathhouses from operating in the city since the mid-1980s. A legacy from the AIDS epidemic, such businesses in San Francisco until now could not have private rooms with locked doors and were required to monitor the sex of their patrons.

Those regulations resulted in a de facto ban on gay bathhouses in the city. Eventually just two remained in the Bay Area, but The Watergarden in San Jose closed for good last summer due to the COVID-19 pandemic. Steamworks in Berkeley is shuttered for now because of the health crisis.

San Francisco's last remaining gay sex club, meaning it doesn't have locked, private rooms, is Eros on upper Market Street in the city's LGBTQ Castro district. It is temporarily closed in light of the health crisis.

Most gay bathhouses had been located on or near Folsom Street in SOMA, lending to the corridor's moniker of the Miracle Mile. Their closure led to the area's diminishment as a gayborhood, with waves of redevelopment in recent decades further decreasing its LGBTQ offerings. Nowadays SOMA has transformed from being a heavily industrial area into a booming residential neighborhood.

Leaders of the SOMA leather district hope a gay bathhouse will reopen in the area. And they are eager to see businesses like the Eagle bar welcome back customers so they are no longer facing financial ruin.

"I think the designation of the Eagle as a historic landmark really codifies and acknowledges the historic nature and central pillar the Eagle has been to our community for so many decades," said Robert Goldfarb, a gay man who is the president of the SOMA LGBTQ cultural district's board. "I think that and the change in the bathhouse regulations will certainly represent an opening that we certainly think will promote business in SOMA, and we feel that it allows an unmet need to be fulfilled in San Francisco."

Gay District 8 Supervisor Rafael Mandelman, who pushed to rescind the bathhouse rules last year, believes an operator likely will find it easier to win city approval to open in SOMA.

"I think that would be a significant boost to the community in general and probably meet some pent up demand, if you will," said Goldfarb.

As for the missing leather flag, a new one is ready to be raised but the recent weather has delayed its debut.

"We will put it up once the rainstorms pass," Goldfarb told the B.A.R. this week.

SF leather plaza inches along in SOMA
Sign up!