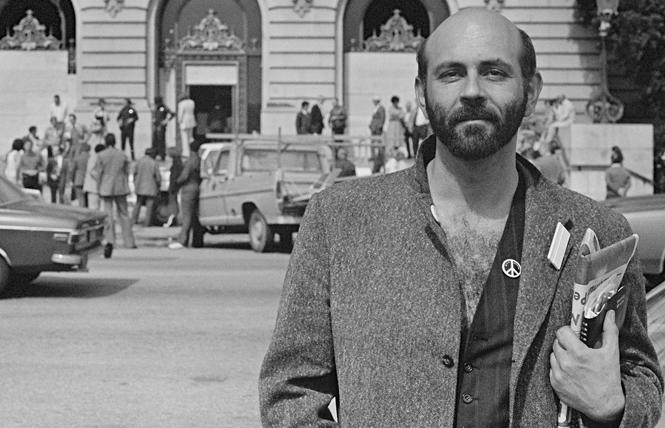 Lee Mentley, the self-described "Princess of Castro Street," died January 20 at his home in Sonora, California. He was 72.

The cause of death was congestive heart failure, according to August Bernadicou, who wrote an obituary for Mr. Mentley for his LGBTQ History Project website.

Mr. Mentley apparently gave himself the "princess" moniker. His 2016 memoir is titled "The Princess of Castro Street."

Mr. Mentley was born June 2, 1948 and raised in East Los Angeles at a time when its inhabitants had to act confidently and fight for their safety, Bernadicou wrote in his obituary. Mr. Mentley's mother, knowing he was different, called him by the feminine name Lorraine, which he shamelessly embraced. His family had guns for protection, and his mother told him to always keep hairspray in his car — it can be used as a weapon — one of the numerous precautions he took throughout his life. His childhood instilled in him a we-must-fight-to-survive mentality, and while he always maintained that he "wasn't a martyr," he was never afraid to make his stance known and take his cause to the street, Bernadicou wrote in his obituary.

In 1972, Mr. Mentley moved to San Francisco and threw himself into the art and activism scene. Inspired by the work of activists in Los Angeles like Donald Kilhefner, Mr. Mentley and a community of activists opened the city's first LGBTQ services center called the Gay Community Center at 330 Grove Street. On the spacious top floor, Mr. Mentley opened an art gallery called the Top Floor Gallery. The gallery and the salons he hosted at his earlier Hulah Palace featured celebrated artists like Dan Nicoletta, William McNeil, Caldwell Brewer, and countless other local artists. To further develop his stance as an art opportunity granter, he became the first openly gay city employee at the Neighborhood Arts Program with San Francisco Arts Commission, Bernadicou wrote in his obituary.

"Lee was the one who invited me to exhibit my photography at the Hulah Palace for their Spring Salon in 1975 and the experience was life changing," he wrote in an email. "I continued as an exhibiting artist there over the years and followed to our new home at 330 Grove The Top Floor Gallery. I also exhibited and documented the reboot Hulah Palace reunion that Lee and friends crafted in 1994. That three-day salon was also a celebration of the 25-year anniversary of the Cockettes and included deeply poignant performances by the remaining Cockettes."

Nicoletta added that Mr. Mentley "always made the prospect of showing work casual and fun, but he was very serious about art as a tool of social transformation."

"I was lucky to meet him and the Hulah Palace group during my formative years as an artist. Many of us stayed loyal friends, I will miss his vim and vigor," Nicoletta added.

In 1978, Mr. Mentley served on the executive committee for the Pride Foundation at 330 Grove Street and took on his most significant art project, facilitating the creation of the rainbow flag, which has since gone onto symbolize LGBTQ people worldwide.

Bernadicou wrote in an email, "I can confidently write as an LGBTQ historian that Lee Mentley facilitated the rainbow flag, which represents LGBTQ people all around the world." He added that Mr. Mentley was a onetime roommate of the late Gilbert Baker, who, as the Bay Area Reporter noted in a 2018 article, co-created the first rainbow flags in 1978 with Lynn Segerblom and the late James McNamara. According to Bernadicou, who has 20 hours of recorded interviews with Mr. Mentley, "he was involved in the big picture organization, securing money, etc."

A March 2020 piece in the Los Angeles Blade by Adrian Brooks, who recently passed away, called Mr. Mentley "The godfather of the rainbow flag."

In 1983, Bernadicou wrote, "Mr. Mentley fled to Hawaii and, in the beginning, lived without access to radio and television and traveled on dirt roads. In Hawaii, he became the curator of Kauai Museum, chair of the Garden Island Arts Council, the founder of END/AIDS, a co-founder of Kauai AIDS Project, sat on the Hawaii Governor's Committee on HIV/AIDS and was a representative for the Lambda Aloha to Hawaii Statewide Committee for Same-Sex Marriage. He did all of this while being a landscaper for the folk singer Buffy Sainte Marie."

In 2000, after he resurfaced in his home state, Mr. Mentley became the AIDS history curator for ONE Archive at the University of Southern California Los Angeles. In 2001, he became Director of Cultural Tourism Marketing and Development for the City of Los Angeles Department of Cultural Affairs, according to Bernadicou's obituary.

A representative from the ONE Archive did not respond to an email message.

Like his time at One Archive, Mr. Mentley also dedicated his life to preserving his and others' legacies. In 2016, he published his memoir, which he wrote in New York City, following in the footsteps of his beatnik hero, William S. Burroughs.

"While he later claimed that he was retired, he was never afraid to push his own beliefs and polarize because he realized that it was up to him to create the change he needed and wanted to see," Bernadicou wrote in his obituary.