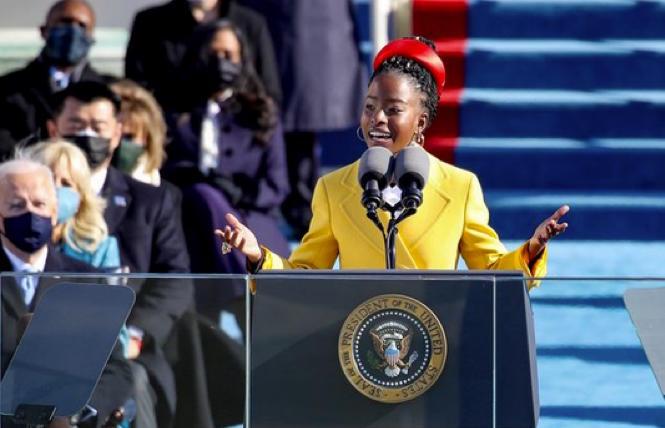 As Americans and people over the world heaved a heavy sigh of relief and joy with the Inauguration of President Joe Biden and Vice President Kamala Harris on January 20, one young poet stood out for her artistic contribution.

Praise for Gorman came from around the world, from unknown fans to former First Lady Michelle Obama.

By Wednesday evening, Gorman posted on Twitter, "I am on the floor! My books are #1 and #2 on Amazon after one day! Thank you so much to everyone for supporting me and my words. As Yeats put it: 'For words alone are certain good: Sing, then.'" 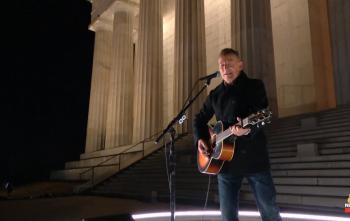 Bruce Springsteen sings on the steps of thee Lincoln Memorial

But the combination of her eclectic hairstyle and large golden dove-shaped brooch left some wondering if Gaga was making a subtle reference to the styles in the film adaptation of The Hunger Games.

Lady Gaga's multi-rhythmic version of "The Star Spangled Banner" brought new life to the national anthem (which has its own contentious history, as well as its racist slave-owning composer, Francis Scott Key).

Other Inauguration performers included country singer Garth Brooks' passable performance of "Amazing Grace," and a white-jacketed and bejeweled Jennifer Lopez sang a medley of "This Land is Your Land" and "America the Beautiful" with the U.S. Marine Band accompanying.

Instead of multiple balls, the Inauguration night's 'Celebrating America' included a special virtual celebration hosted by Tom Hanks, with Bruce Springsteen and John Legend singing on the steps of the Lincoln Memorial, along with remote-recorded songs performed by John Bon Jovi, Foo Fighters, Justin Timberlake and others. Broadways stars gathered for renditions of "What the World Needs Now" and a medley of "Season of Love" from Rent and "Let the Sun Shine" from Hair. (watch on YouTube)

And instead of focusing on glamour and parties with rich donors, the event including multiple short video segments honoring members of working class industries, fundraising kids, hospital workers and military members, even astronauts broadcasting their greetings from outer space.

The celebration concluded with Katy Perry lipsyching a symphonic version of her hit song, "Firework," as a stunning cascade of real fireworks exploded above the National Mall all the way to the Washington Monument.