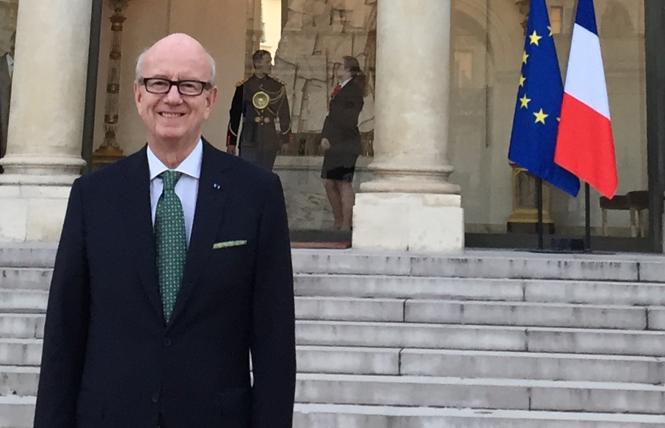 Thomas E. Horn, a former publisher of the Bay Area Reporter and chair of the San Francisco-Paris Sister City Committee, has been awarded France's National Order of the Legion of Honor by President Emmanuel Macron.

Horn, a gay man, received notification of the honor last month from Philippe Etienne, the French ambassador to the United States.

"Your contribution to strengthening our bilateral relationship through your role in the creation of the San Francisco-Paris Sister City Committee and its chairmanship, your support for the Alliances Francaises in the United States, and your efforts following the fire at Norte-Dame are absolutely extraordinary," Etienne wrote.

Horn, who has long been involved with French causes and culture and is a former chair of the Alliance Francaise San Francisco, said he was deeply appreciative.

Macron awarded six other Legion of Honor decrees to U.S. residents. They are: Gale Brewer, Manhattan borough president; Adam Gopnik, a staff writer at the New Yorker; Agnes Gund, philanthropist and chair emerita of the board of the New York Museum of Modern Art PS 1; Seema Hingorani, managing director at Morgan Stanley; Marina Kellen French, philanthropist; and Irene Natividad, women's rights activist and president of the Global Summit of Women.

Horn said that this is his fourth decoration from the French. He previously received Arts & Letters and twice the National Order of Merit (Chevalier and then Commander).

Decision on Folsom, Dore Alley street fairs expected soon
A decision on whether the two South of Market leather-themed street fairs will proceed in person in 2021 will be made following a meeting next week between the San Francisco Municipal Transportation Agency and Folsom Street Events, the executive director of the latter has told the Bay Area Reporter.

"Folsom Street Events has announced that there will be no 'in person' Folsom Street Fair or Up Your Alley Fairs in 2021," the newsletter stated. "But the Bears of San Francisco and the Sisters of Perpetual Indulgence are planning a 2021 Bearrison Street Fair, and would love to have your help in planning it. Join a team" here.

Chase announces $5M in grants to LGBTQ groups
As part of its commitment to advance equality for the LGBTQ community, JPMorgan Chase recently announced $5 million in support for five nonprofit organizations, including the San Francisco AIDS Foundation and Out & Equal Workplace Advocates, which is based in San Francisco and Washington, D.C.

SFAF, established in 1982, works to promote health, wellness, and social justice for communities most impacted by HIV, through sexual health and substance use services, advocacy, and community partnerships. The new funding will advance the foundation's innovative model of free, highly accessible health care for transgender people and health workforce development for trans people, according to a news release from Chase.

In a statement, SFAF CEO Joe Hollendoner praised the grant.

"San Francisco AIDS Foundation's vision of health justice requires a deepening of our work with transgender and nonbinary communities, especially those who are low-income. This unprecedented investment by JP Morgan Chase will allow us to sustain and expand efforts to care for the comprehensive health and social needs of these community members," he stated. "Through this partnership, we truly have the opportunity to transform the lives of our trans and nonbinary individuals as well as the larger systems of care that have a responsibility for their well-being."

Out & Equal, which works to achieve workplace equality, will use the funds to start a new program aimed at creating visible transgender executives and senior leaders.

"The need to step up for the trans and gender-expansive community is clear and JPMorgan Chase deserves credit for making this commitment," Out & Equal CEO Erin Uritus stated in response to a request for comment. "We're excited to be able to expand our efforts to help members of this community thrive at work!

"This new funding is going to support Out & Equal's largest and most comprehensive program to further trans equality at work and develop the next generation of trans leaders," she added. "We are investing in trans and gender-expansive employees across all career stages. And accomplishing belonging and full access to opportunities for all trans and gender-expansive people means transforming the workplaces in which they show up. As part of this investment, we are also developing diagnostics, toolkits, resources, and trainings for employers."

The other nonprofits receiving Chase grants are GLSEN, SAGE, and The Center. All are based in New York City.

"Together, we can do more to build a culture of respect and inclusion around the world," stated Brian Lamb, global head of diversity, equity, and inclusion at Chase. "These partnerships are a top priority because now, more than ever, we need to lock arms with our LGBT+ employees, customers, and partners to promote equality and better serve our communities when they need it most."

He also said that San Francisco gets only a small portion of the state's vaccine allocation.

He wrote that the city is establishing high-volume vaccine hubs in areas most impacted by COVID including South of Market (Moscone Center); Oceanview, Merced, and Ingleside (City College Ocean Campus); and Bayview (SF Produce Market).

In addition to these sites the city and health care providers will be establishing smaller pop-up vaccine sites in impacted communities.

Mandelman stated that the city has created a website where people who live and work in San Francisco can be notified once they are eligible to be vaccinated. People can sign up for these notifications here.