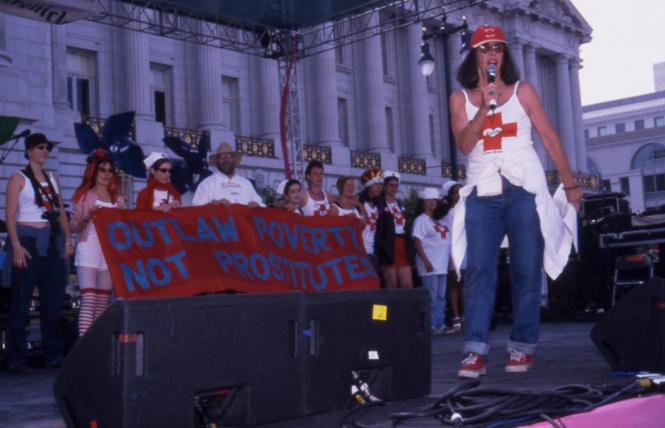 Margo St. James, a noted sex-positive feminist and pioneer of the sex workers' rights movement, died January 11 at age 83. Ms. St. James had been living in a memory care facility in Washington state and was moved to hospice care after a fall, according to her longtime friend Carol Stuart.

Ms. St. James founded the sex worker activist group COYOTE (Call Off Your Old Tired Ethics), organized the infamous Hooker's Balls in the 1970s, was nearly elected to the San Francisco Board of Supervisors in 1996, and is the namesake of St. James Infirmary, the nation's first health clinic for sex workers.

Ms. St. James "takes her place in San Francisco's pantheon of citizen activists, one of the people who have made this city what it is — and certainly what it was in the last 30 years of the 20th century," Carol Queen, director of the Center for Sex and Culture, said in a statement issued by a group of Ms. St. James' close friends.

Although it is unclear whether Ms. St. James self-identified as bisexual or lesbian, she had both female and male lovers, including a decade-long relationship with Gail Pheterson, an academic researcher and sex work activist.

In a joint response to the B.A.R.'s query about Ms. St. James's sexuality, her friends wrote, "Margo was a free spirit, and while we know she had passionate and loving connections with women and men, we don't know that she claimed a sexual orientation label or identity. In those days, if you asked a person if they were bisexual, some of them — maybe Margo — would have said, 'Isn't everyone?' or 'I don't need a label, I'm just sexual.' But it's clear that Margo was neither straight nor narrow."

The founding of COYOTE
Margaret St. James was born in Bellingham, Washington, on September 12, 1937. As a girl, she worked on her parents' dairy farm and became an accomplished painter. She married her high school boyfriend and had a baby soon after graduation.

But before long, she decided the housewife life was not for her. She left her husband and son, and moved to San Francisco in the late 1950s, settling in the beatnik haven of North Beach.

Ms. St. James often told the story of how she decided to become a prostitute after being swept up in a vice raid in 1962, before she had ever actually turned a trick. She briefly attended law school, successfully fought to overturn her conviction, and later worked as a private investigator.

In the 1960s, Ms. St. James became a fixture of the city's bohemian scene, hosting musicians and counterculture figures such as Frank Zappa, Ken Kesey, and Paul Krassner at her Haight-Ashbury home.
In the early 1970s, Ms. St. James lived at Druid Heights, the Marin intentional community founded by lesbian poet Elsa Gidlow. She credited Gidlow with politicizing her by slipping feminist literature under her door.

With women from this circle and those she met doing babysitting and housecleaning jobs, Ms. St. James started a consciousness-raising group called Whores, Housewives, and Others. "'Others' meant lesbians but it wasn't being said out loud yet, even in those liberal bohemian circles," she later recalled.

On Mother's Day in 1973, St. James founded COYOTE, the first sex workers' rights group in the United States, at a time when prostitutes, housewives, and lesbians were starting to make alliances in the burgeoning feminist movement. She also drew on her connections with lawyers, police, and journalists she had made while fighting her prostitution conviction.

COYOTE received an early grant from Glide Memorial Church, which also provided support for the LGBTQ movement. Glide hosted the National Hookers Convention in 1974, an event that gave rise to the Hooker's Ball, which Ms. St. James spearheaded until 1978. That year, when attendance reached 20,000, Ms. St. James, dressed as then-Supervisor Dianne Feinstein, made her entrance at the Cow Palace astride an elephant, according to David Talbot's "Season of the Witch."

"We got support from the street all the way to the top — even some of the rich liberals liked the pretty women and invited us up to their mansions on Nob Hill," Ms. St. James said in a 2013 interview with Bitch magazine. She became friends with leading political figures, including the late San Francisco District Attorney Terence Hallinan, and often appeared in Herb Caen's San Francisco Chronicle column.

COYOTE offered legal assistance to people arrested for prostitution, fought harmful health policies such as jail quarantines for sexually transmitted diseases and the use of condoms as criminal evidence, and provided safer sex education as the HIV/AIDS epidemic escalated.
"[Margo] was a constant lesson in brazen courage, with generosity at the center of her presence," Carol Leigh, aka Scarlot Harlot, told the B.A.R. "What I learned from Margo and Priscilla Alexander in the 1970s was that we should center our work on those who are impacted most by the laws."

A history of activism
By the late 1970s, following the assassination of Mayor George Moscone and gay Supervisor Harvey Milk, San Francisco's political climate began to grow more conservative. Around the same time, the feminist "sex wars" broke out, pitting sex workers' rights proponents and other pro-sex feminists against those who opposed pornography and prostitution.

In 1985, Ms. St. James moved overseas to focus on international activism, leaving COYOTE's leadership in the hands of Priscilla Alexander and Gloria Lockett, who later went on to start CAL-PEP, an early harm reduction organization for sex workers in Oakland.

Ms. St. James and Pheterson lived together first in The Netherlands and then in Montpeyroux, a rural village in the south of France. They founded the International Committee for Prostitutes' Rights and organized the First World Whores' Congress in Amsterdam in 1985 and the second congress at the European Parliament in Brussels in 1986. St. James described COYOTE's founding in her preface to Pheterson's influential anthology, "A Vindication of the Rights of Whores," published in 1989.

In a remembrance on Facebook, author and former On Our Backs editor Susie Bright, who met Ms. St. James and Pheterson in France, wrote, "Margo and Betty [Dodson] were the single most important sexual liberationists and feminist revolutionaries who ever slapped society upside its head." Dodson, an artist and sex educator best known as an advocate for masturbation, died on October 31, 2020.
After returning to San Francisco in the early 1990s, Ms. St. James married her longtime friend Paul Avery, a detective and crime reporter who had investigated the Zodiac killer. It was a mutually beneficial arrangement — she called it a "marriage of inconvenience" — as she cared for him as he grew increasingly ill with emphysema.

Although her 1980 campaign for the Republican presidential nomination had been an activist stunt, her 1996 run for a seat on the San Francisco Board of Supervisors was for real, and she came in seventh out of 28 candidates in the race for six at-large seats. When one seat was later vacated, then-Mayor Willie Brown refused to appoint her, instead choosing now-governor Gavin Newsom.

In 1999, Ms. St. James, Leigh, Johanna Breyer, and Dawn Passar of the Exotic Dancers Alliance, and a group of medical allies, started St. James Infirmary, the first peer-based occupational health and safety clinic for sex workers. The clinic initially operated out of San Francisco City Clinic before moving to its own facility on Mission Street. It is now housed at San Francisco Community Health Center at 730 Polk Street, a space shared with Shanti Project and Project Open Hand.

"Margo generously shared her sassy brilliance and no-nonsense devotion to progressive politics with all of us lucky enough to walk alongside her on the path towards liberation," SJI's founding medical director, Dr. Deborah Cohan of UCSF Health, told the B.A.R. "Margo was a role model to so many of us at the clinic, showing us how to simultaneously be fierce and compassionate, serious and fun, strategic and non-linear, open-minded and open-hearted."

As Avery's conditions worsened, he and Ms. St. James moved to a cabin on Orcas Island, off the coast of Bellingham, Washington. After his death in 2000, she continued to live there alone until she developed Alzheimer's disease and moved to a memory care facility.

Ms. St. James is survived by her siblings, son, three grandchildren, nine great-grandchildren, and many friends and admirers around the world. Her papers are held at Schlesinger Library at Harvard University. A memorial service will take place this summer on Orcas Island, where her ashes will be spread. A virtual memorial may also be planned, according to Leigh.