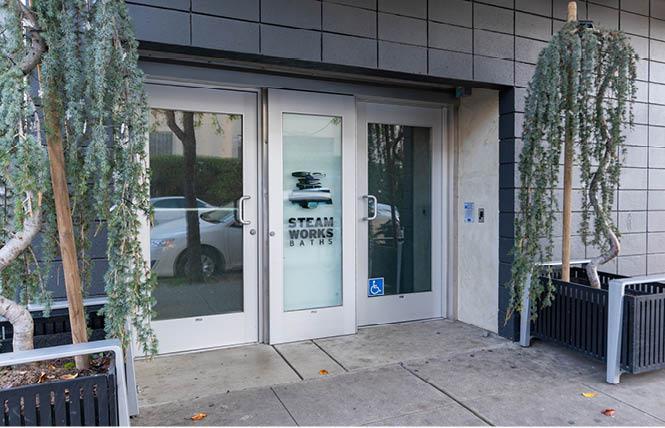 The San Francisco Department of Public Health has asked for more time to rescind restrictions to allow bathhouses like Steamworks in Berkeley to open in the city. Photo: Jane Philomen Cleland

San Francisco health officials were supposed to rescind by January 1 the restrictions that have kept traditional gay bathhouses from operating in the city since the mid-1980s. But they failed to meet that deadline and have asked for a 30-day extension.

The Bay Area Reporter had inquired with the city's Department of Public Health last week prior to the new year about the status of the rule revision for adult sex venues. Due to the holiday, with staff out on vacation, the department responded January 4 that it needed more time.

"DPH has requested a one-month extension for this work," stated the department.

It did not explain the reason for the delay, but health officials have been dealing with a surge in COVID cases since November. As it is, bathhouses will not be allowed to operate in San Francisco until after the coronavirus outbreak subsides.

Local health officials have indefinitely extended their order requiring all nonessential employees to remain home and for residents to avoid traveling outside of the Bay Area. Those who do travel are asked to quarantine for 10 days upon their return.

Nearly a year ago gay District 8 Supervisor Rafael Mandelman instituted the process to revise the city's bathhouse rules following decades of demands from gay men that they no longer made sense in light of advancements in preventing HIV transmission. People can now take PrEP to help keep them negative, while people living with HIV who are taking medication to control their viral loads are considered to be unable to transmit the virus.

Mandelman told the B.A.R. he has no issue with the delay in seeing the rule revision take place.

"With COVID-19 cases surging, the Department of Public Health understandably has more urgent priorities than updating the bathhouse rules," Mandelman responded to a request for comment. "A one-month extension is a reasonable request and should still provide plenty of time for prospective operators to open new businesses that can be a part of the City's economic recovery when it is safe to do so."

Since the Board of Supervisors adopted the ordinance in July, Mandelman has received several messages attacking him for pushing to revise the bathhouse rules amid a global health pandemic. One message posted online in August by a group calling itself Recall California accused Mandelman of hypocrisy as "gym, salons, schools, churches closed. But, let's go f**k some strangers."

In an interview last month, Mandelman had told the B.A.R., "We are not reopening bathhouses while keeping restaurants closed."

Coming during the height of the AIDS epidemic, the city's bathhouse regulations required the businesses not to have private rooms with locked doors and to monitor the sex of their patrons. It in effect banned gay bathhouses from operating in San Francisco, leaving residents to have to travel to such businesses in Berkeley and in San Jose.

While The Watergarden in the South Bay shuttered for good last year due to the COVID pandemic requiring it to close, Steamworks in Berkeley is expected to reopen when the health crisis subsides. To date, there have been no announcements of a gay bathhouse operator wanting to open in San Francisco.

Blow Buddies, which had been one of San Francisco's last two adult gay sex clubs, closed its doors last year because of COVID. Eros, the gay sex club in the Castro, had briefly reopened its doors when the city allowed certain businesses to reopen in late summer but at reduced capacity only for solo-play with patrons required to wear masks and remain socially distanced.

It is once again closed temporarily because of the rising COVID cases in San Francisco. A note on its website tells customers it is unknown when the Market Street sex club will be able to reopen.

When it does it is not expected to transition to being a bathhouse. The owners of Eros had told the B.A.R. last year they were unlikely to add locked, private rooms to their location.

Last month, Mandelman had suggested one location in the Castro that would be an ideal space for a gay bathhouse to seek permits to open in.

"The empty 24 Hour Fitness seems like an ideal site," said Mandelman, referring to the now shuttered gym that happens to be a block away from Eros near the intersection of Market and Church streets.

UPDATED 1/4/2021 with comment from Supervisor Mandelman about the delay request.