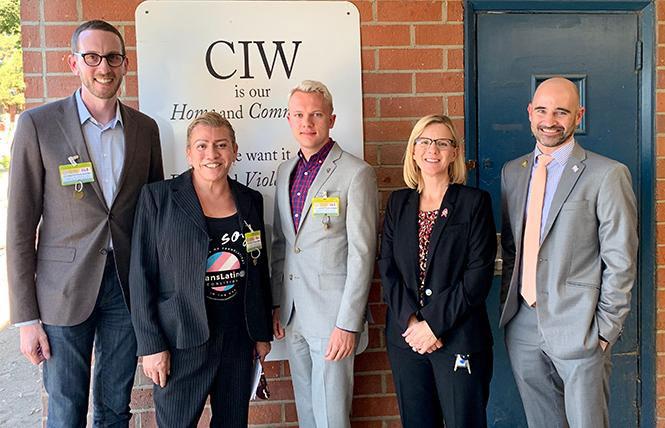 Come January 1 how California houses transgender inmates and treats LGBTQ youth sex offenders will change due to the enactment of two controversial bills lawmakers adopted in 2020. The impacts of the legislation, however, will not be felt immediately.

According to the California Department of Corrections and Rehabilitation, 1,088 incarcerated people identified as transgender, gender-nonconforming, nonbinary, intersex, or having symptoms of gender dysphoria as of November 30. Already, some transgender people are being "successfully" housed at institutions that match their gender identity, according to a fact sheet CDCR released in December.

"CDCR is committed to providing a safe, humane, rehabilitative and secure environment for all people housed in the state's correctional facilities," stated CDCR press secretary Dana Simas in an emailed reply to the B.A.R. "CDCR recognizes that transgender, nonbinary, and intersex people are at greater risk of victimization and has proactively worked to address and improve the care and experiences of this population."

Trans rights groups will be closely watching to see how the state agency, now overseen by longtime state prison official Kathleen Allison, implements SB 132. It is expected the agency will take anywhere from 30 to 90 days to approve a transgender inmate's request to be rehoused.

"I do believe CDCR is quite committed to successfully implementing the law. CDCR worked collaboratively with us for almost two years," noted Wiener in a recent phone interview with the Bay Area Reporter. "I do believe they will try very hard to make it work well. Will there be bumps in the road? I am sure there will be.

"As we have seen with the access to gender-affirming health care, there are some institutional challenges," added Wiener, referring to trans inmates being granted the medical care they need while incarcerated. "I do believe CDCR very much wants to see this succeed."

According to the state agency's fact sheet housing requests based on gender identity will be reviewed by a multi-disciplinary classification committee chaired by the warden of the facility in consultation with custody, medical and mental health care staff, and a compliance manager for the federal Prison Rape Elimination Act (PREA), which expressly prohibits housing decisions based solely on an incarcerated person's external genitalia. The committee's decision will take into account all case factors and the individual's history.

"If approved, the incarcerated person will be transferred to a male or female Reception Center consistent with their gender identity," states the fact sheet. "If disapproved, notification is given to the incarcerated person who has up to 30 days to grieve the decision. If grieved, it will be referred to the Departmental Review Board for a decision regarding housing in a male or female prison."

Simas noted that the agency has already put in place a number of policies, practices, and procedures for the screening, housing, and treatment of transgender incarcerated people. For instance, they can access clothing and personal care items consistent with their gender identity and set "clear expectations" with prison staff that they be addressed consistent with their gender identity, including the use of correct pronouns and honorifics, added Simas.

"CDCR also developed and provided specialized training to staff to ensure they are aware of laws and departmental policies and to give them the knowledge and tools they need when interacting with the incarcerated transgender community," she wrote.

Youth sex offender registry
Another of Wiener's criminal justice reform bills that took several years to pass out of the legislative process is also taking effect in the new year. SB 145 ends the discriminatory treatment of LGBTQ young adults faced with registering as sex offenders.

The controversial bill was used to attack a number of out state legislators over the last two years. It resulted in Wiener being subjected to death threats by followers of the QAnon conspiracy theory as well as false accusations that he was promoting pedophilia. The charges not only came from online trolls but also from other public officials, such as fellow state Senator Melissa Melendez (R-Lake Elsinore).

The bill doesn't change any criminal statutes. Instead, it ensures LGBTQ adolescents are treated the same as their heterosexual peers when faced with the possibility of being listed on the state's sex offender registry.

"It will just be implemented as cases move through the system," noted Wiener.

Other new laws
Due to the adoption of the Safe and Supportive Schools Act of 2019, the state Department of Education has until July 1 to develop and update its resources and training materials so they incorporate LGBT cultural competency and how to address LGBTQ-based bullying to teachers and other certificated staff members.

Jonathan Mendick, a spokesman for the agency, told the B.A.R. December 30, after the article was initially published, that it has already posted some resources online here and expects it will complete the website by the final date of June 30.

Backed by State Superintendent of Public Instruction Tony Thurmond, Assembly Bill 493 was signed into law by Newsom with the condition that the training not be mandatory as it was estimated to cost the state's 343 school districts a combined $3.25 million. In exchange, Newsom promised to work with LGBTQ lawmakers and advocates on providing funding for school districts to train their teachers in his 2020 budget proposal.

But due to the COVID pandemic, no such funding was awarded this year. Gay Assemblyman Evan Low (D-Campbell), who is chairing the Legislative LGBTQ Caucus, told the B.A.R. the affinity group for out lawmakers would be seeking the funding in the 2021-2022 budget.

Also by July 1 California hospitals have to submit to the Office of Statewide Health Planning and Development within the California Department of Public Health how much they are contracting with LGBTQ-owned businesses as well as those owned by women, minorities, and other disadvantaged groups. It is due to the adoption in 2019 of AB 962 co-authored by Assemblywoman Autumn Burke (D-Inglewood) and Assemblyman Rob Bonta (D-Oakland).

The transparency requirement is aimed at seeing more such companies benefit from the estimated $230 billion the state's hospital industry spends annually. It mirrors recent efforts to encourage other industries in the state, from public utilities to transportation agencies, to also increase their contracts with queer, female, and minority-owned firms.

HIV insurance bill
One bill adopted this year aimed at ending HIV-based discrimination by insurance companies will not take effect until January 1, 2023. SB 1255 by Senator Lena Gonzalez (D-Long Beach) and the Senate Committee on Insurance will prohibit an insurer from declining an application or enrollment request for coverage under a policy or certificate for life insurance or disability income insurance solely because the applicant is living with HIV. Anyone who negligently, willfully, or maliciously discloses the results of an HIV test will also face penalties as of that date.

The bill, however, does allow an insurer to refuse to cover, limit the coverage offered, or charge a different rate to an HIV-positive applicant "if the refusal, limitation, or charge is based on sound actuarial principles and actual or reasonably anticipated experience."