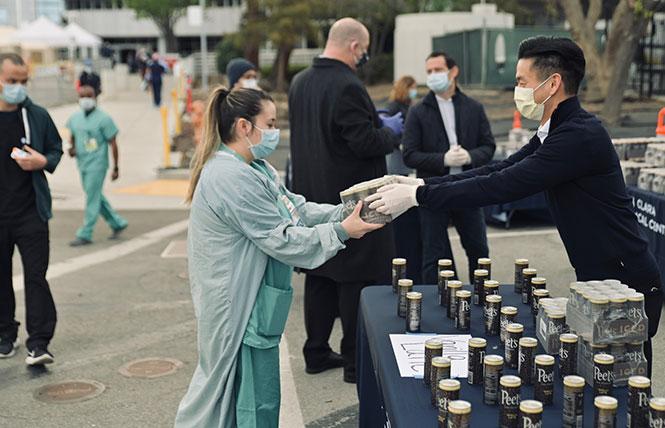 California was experiencing one of its boom cycles the first time gay Assemblyman Evan Low (D-Campbell) served as chair of the Legislative LGBTQ Caucus during the 2017-2018 session. So flush was the state's coffers there was $1.8 billion set aside for the state's rainy day fund in the budget lawmakers agreed to in the summer of 2017.

Fast forward to the 2021-22 legislative session where Low for a second time will lead the affinity group for out state legislators amid a global health pandemic that has wrecked the coffers of cities across the Golden State. While the state itself is estimated to see a onetime windfall of $26 billion in next year's budget, California is projected to have a $17 billion deficit by the 2024-25 budget cycle.

It will likely mean few funding requests for services and programs directed at the state's estimated 1,859,000 LGBTQ residents will be approved. Thus, the eight-member LGBTQ caucus will have to be judicious in what it prioritizes in its budget request next year, noted Low in a recent interview with the Bay Area Reporter about what his priorities will be as its chair.

"There is never enough resources and never enough capacity or time," noted Low. "We don't want to be somber but we also need to be realistic given our budget constraints on what we can and cannot do."

It remains to be seen what constraints on their bill packages lawmakers will face when they return to the Statehouse January 11 because of the COVID-19 pandemic. Even in good times it has been difficult for more than one or two LGBTQ bills with large costs attached to them to make it out of the Legislature's appropriations process.

This year saw a $15 million fund to pay for transgender wellness programs make it to the desk of Governor Gavin Newsom only after its sponsor agreed to strip out its funding requirement in the hopes of seeing the money be allocated in the future. Similarly, efforts were dropped to fund a bill passed last year without any money attached to it that called for online-based teacher training on LGBTQ issues.

The legislative strategy "is intentional," said Low, as it provides leverage for the LGBTQ caucus and community advocates in requesting funds going forward.

"We create the mechanism for where we want to go," explained Low. "At the same time we are being realistic about the budget constraints due to COVID. Now that we have a mandate for our government, we want to make sure it is specifically funded."

Low, 37, told the B.A.R. he has already been in talks with Assemblyman Phil Ting (D-San Francisco), chair of the Assembly Appropriations Committee, about what LGBTQ programs and services can be funded next year.

"Phil is committed to looking at what we can do," said Low.

2021 plans
In terms of new LGBTQ-focused legislation the caucus plans to prioritize in 2021, Low told the B.A.R. that the various bills are still being discussed among the eight out lawmakers in collaboration with community leaders and their straight colleagues who want to author certain bills. Legislation that had been pulled or put on hold this year for various reasons likely to come back include restricting the kinds of medical procedures done on intersex youth, requiring state colleges and universities not to deadname transgender graduates on their diplomas and transcripts, and making it easier for transgender parents to update birth records.

"We are still in that mode of planning for the legislative year and figuring out next year's components," said Low.

It is uncertain if Low will again pursue banning conversion therapy for adults, as California already prevents the anti-LGBTQ practice to be used on minors. He had pulled such a bill in 2018 in the face of intense opposition from religious leaders in order to work on gaining their support.

He did get a resolution condemning adult conversion therapy passed but it had no impact on the practice of it in the state. Legislation may not be necessary, Low pointed out, should the incoming administration of President-elect Joe Biden move to ban the homophobic practice nationwide.

"We are keeping our options open and doing that assessment," said Low.

The LGBTQ caucus is expected to forcefully support a request from gay state Senator Scott Wiener (D-San Francisco) that the Joint Legislative Audit Committee examine how state health officials are collecting not only sexual orientation but also gender identity demographic data. Since 2018, a number of California departments and agencies focused on health care and social services were to be collecting SOGI data after lawmakers enacted several pieces of legislation requiring that they do so.

But it became apparent that the SOGI collection was not being conducted as expected when the COVID-19 outbreak began in March and there was no data on how many LGBTQ Californians were testing positive for the coronavirus. Nine months later and the state health department is only reporting limited data on its website about the impact the health crisis is having in the state's LGBTQ communities.

"I am in full support and we need to explore all further opportunities not just on the legislative side but on oversight," said Low when asked about the audit request. "How did we get here and why is there a need for this legislation in the first place? What fell through the cracks and what do we need to do to address that?"

It will not be until sometime well into 2021 that such an audit could be conducted. Taking up the request will be newly seated gay state Senator John Laird (D-Santa Cruz), the vice chair of the committee that oversees audits.

"Therein lies the importance of the caucus and caucus membership," noted Low. "We have to advocate for our own community and hold the administration and departments accountable to our community. We need to be sounding this alarm. So many moving pieces are occurring, it is important we articulate why this is important."

The longevity of the LGBTQ caucus is also a top priority for Low, who told the B.A.R. he is already looking at how to recruit candidates to run for state Assembly and Senate seats that will be on the ballot in 2022.

"We are going to be looking at many places outside the norm of major urban areas like the Bay Area, Los Angeles, or San Diego," said Low in terms of the candidate recruitment efforts, pointing out that "it is just a matter of time" to see an out state legislator get elected in the Coachella Valley, which includes the Palm Springs area where the LGBTQ community continues to increase and the electorate grows more Democratic.

Contributing to the caucus's future expansion will be how the 2020 census count impacts the redistricting process. Low said how the boundaries for state and federal offices will be drawn is going to be a key concern of his as caucus chair.

"It is important for us to prioritize as we head into next year," Low said. 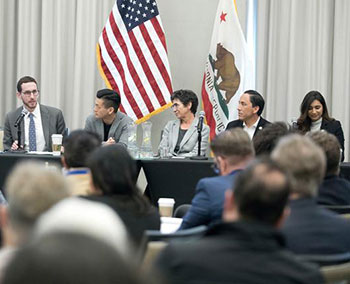 Caucus of 8
The LGBTQ caucus' current membership of eight returns it to its high point and includes new Assemblyman Alex Lee (D-San Jose), its first bisexual member and youngest ever at age 25, and gay Assemblyman Chris Ward (D-San Diego), the first out father with young children to serve in the Legislature.

Also helping to grow the caucus are former Assembly members who were elected this year to the state Senate. Lesbian Senator Susan Talamantes Eggman (D-Stockton), now vice chair of the LGBTQ caucus, moved from one chamber to the other this month, while Laird returned to the upper chamber after being termed out of his Assembly seat in 2008.

"We are happy we have new blood and hope it will continue coming," said Low, noting that all five of the caucus's incumbent members won their races in November. "We didn't lose any. We are also excited by the fact we still have the most diverse caucus."

There still have been no transgender or queer members of the caucus, something Low hopes will be achieved in coming election cycles. While there are Latino and Asian Pacific Islander members, the LGBTQ caucus has yet to have a Black member.

"That is something I imagine is important to many of us," said Low, "and the intersectionality that comes with that."

There will be several special elections in 2021 for legislative seats due to vacancies. But it does not appear any out candidates will be running in the March 2 contest for the Senate seat vacated by Los Angeles Supervisor Holly Mitchell.

Should Assemblywoman Shirley Weber (D-San Diego) be confirmed by the Legislature as the next secretary of state, it could open the door for an LGBTQ person to run to succeed her. Newsom tapped her for the position December 22 hours after naming the incumbent, Alex Padilla, to succeed Vice President-elect Kamala Harris in the U.S. Senate as the first Latino senator from California.

Weber's daughter, Dr. Akilah Weber, a member of the La Mesa City Council, has already entered the race, tweeting the day after Christmas that "it would be an honor to represent and serve the residents of this district and continue to ensure that we build a better tomorrow that improves the future for ALL Californians."

Low had been planning to run for the statewide office in 2022 when Padilla would have been termed out, and it is unclear if he will now suspend his campaign, as he has yet to address the question. The 72-year-old Weber, set to become the first African American to be secretary of state, said last week that she will seek a full term and not serve as a caretaker in the seat.

Talking to the B.A.R. prior to Weber's nomination, Low had pointed out that he is a former chair of the Assembly's election committee and has served on it his entire time in Sacramento. He is also carrying a bill next year to establish Election Day as a state holiday and supported the unsuccessful ballot measure that would have allowed 17-year-olds to vote in primaries if they were 18 by the fall election.

"I am always honored to serve in the best capacity to advocate for our community," said Low.