Transmissions: Looking ahead with respair 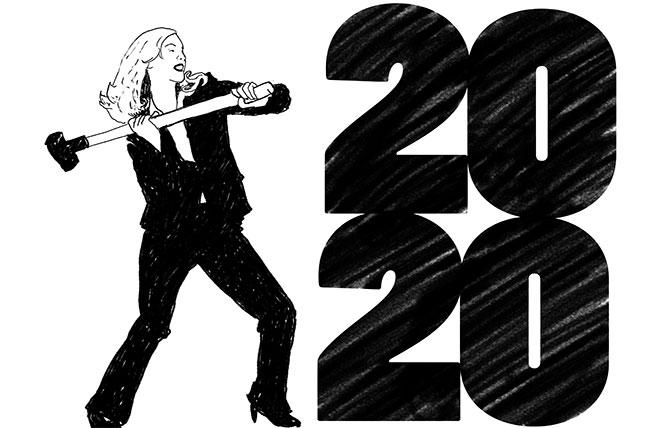 We have reached the end of 2020, and I am sure my feelings about the year easily match anyone who happens upon this column. Good riddance to such a difficult year, and don't let the door hit you on the way out.

Like so many others, I have spent this year carefully going about my business, staying at home aside from the somewhat necessary trips to the market every week or two, and worrying about my partner who is somehow an essential worker at a local garden center. Presumably potting soil and bare-root roses are now products that one simply cannot live without.

In May, I lost my first friend to COVID-19. I have had others who've battled it as well, with varying levels of success. Meanwhile, I have yet other friends with their own fights against deadly illnesses derailed due to the lack of medical staff because of the pandemic.

I've been fortunate to work from home with an employer that has a long history with the virtual office, and who has pivoted to an entirely work-from-home model — but I have seen many friends and family face furloughs, layoffs, and so on. I have seen already precarious employment and housing situations of my friends thrown into chaos as the result of the impact of COVID-19 and efforts to survive same.

This year has also been so much more than the pandemic. Racial tensions that started in the Obama presidency with the deaths of Trayvon Martin, Eric Garner, and Michael Brown Jr. exploded once again in 2020 after the police killings of George Floyd, Breonna Taylor, and so many others. White supremacists, emboldened by President Donald Trump and others, have taken to the streets, often adding fuel to protests.

Misogyny, too, has been on the rise — as has homophobia. Hand in hand has been a marked increase in transphobia. This year over 40 people were killed in anti-transgender violent incidents. All the while, the right-wing, in conjunction with other anti-trans bigots, has waged a war of words, claiming that transgender people were erasing lesbian, gay, and bisexual people, or continuing to promote long-debunked "bathroom predator" conspiracies.

In a word, it has been a very challenging year to be a transgender or nonbinary person.

Still, 2020 has not been without some bright points, with the biggest of these being the Supreme Court's decision in Bostock v. Clayton County and, in particular, R.G. & G.R. Harris Funeral Homes Inc. v. Equal Employment Opportunity Commission, which was consolidated under Bostock with a third case, Altitude Express Inc. v. Zarda.

In a 6-3 decision, the court ruled for the plaintiffs, declaring that discrimination based on sexual orientation or gender identity falls under sex discrimination in Title VII of the Civil Rights Act of 1964. This has also come up in Parents for Privacy v. Barr, in which the court upheld a lower ruling that included transgender students under Title IX. This protects their rights to use appropriately-gendered facilities in schools.

Likewise, the election has made for strides in transgender representation, with Sarah McBride becoming a state senator in Delaware, and the highest-ranking trans politician in the United States.

Of course, I would be remiss not to also note the election of Joe Biden and Kamala Harris, defeating Trump and Vice President Mike Pence for a second term. Biden has made it clear that he will be an advocate for trans rights during his presidency, and we are already seeing cabinet picks that point to this. Frankly, just getting Trump and Pence out of office is already a step forward for the trans community.

I want to note, however, that the end of a calendar year, itself, is a fairly arbitrary thing, and much of the above started long before 2020 was at the top of the page. COVID-19 has the clue right in its name, having been discovered in 2019, and the failed leadership that has led to so much trauma around the health crisis was set into motion by the Senate and presidential administration long before that.

Likewise, racism, xenophobia, misogyny, anti-Semitism, homophobia and transphobia, and so many more forms of hatred and prejudice did not just come into existence in 2020. They may have been the fuel behind so much this year, but they are hardly new.

Nevertheless, it seems just as well to look at the end of this year, when so many horrible things bubbled up to the surface and so many of us faced pain and desperation, as a time to recover from the anguish.

In the 1400s, there was a word, long since forgotten, that should probably return to our vocabulary in 2021: respair. The meaning may be obvious in context, as it refers to fresh hope after living through a period of despair. It is the clouds parting after a lengthy storm, and that is something we can take to heart.

As I write this, we have a president who is doing his level best to sabotage the incoming leader, and a Senate that could — depending on the runoffs in Georgia — swing control to the Democratic Party. Now may well be a time where the worst may pass.

This isn't to say that we get a break, as there is still so much to undo. Likewise, there will still be bigots to quell, and a whole lot we must continue to press on.

We can't let this be a time to sit back and relax, but, just this time, we can feel a lot more hope that we sensed in 2020.

Gwen Smith wishes you the best in 2021. You'll find her at www.gwensmith.com