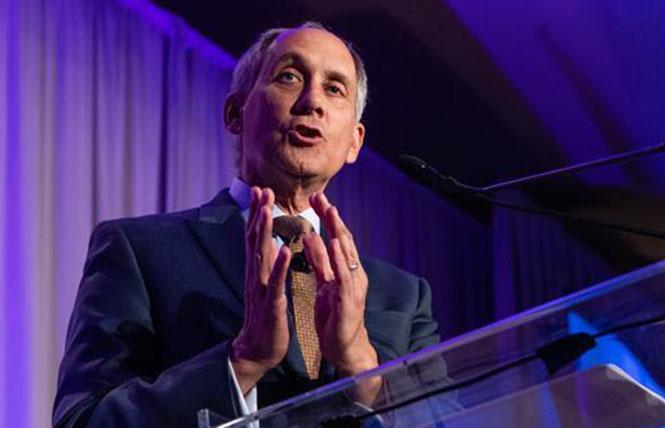 In a sign of the economic devastation wrought by the pandemic, four in five Bay Area LGBTQ nonprofits have seen a decrease in revenue and more than half have had to reduce services, according to preliminary results of a Horizons Foundation survey released December 17.

The survey, taken in October — about seven months into the health crisis — is the most comprehensive data announced thus far about how the pandemic has affected 61 local nonprofits primarily serving the queer community.

"It's not a surprise," Roger Doughty, a gay man who is the president of Horizons, told the Bay Area Reporter. "At the same time, I'm a believer that we should make sure our assumptions are borne out in reality. One of the things we wanted to do is to get a better gauge to see who's being affected."

While 39% of the surveyed nonprofits have seen a rise in requested services (58% among nonprofits that are geared toward racial and ethnic minorities), 52% have had to reduce programs, according to the preliminary results.

While 58% of the organizations saw a decrease in revenue from individual donations, 21% saw an increase.

Toni Newman, a trans woman who was brought on as the executive director of the Lavender Youth Recreation and Information Center in October, and who had previously headed St. James Infirmary, told the B.A.R. that LYRIC — which participated in the survey — has been fortunate.

"If I can be honest, LYRIC has not laid off a soul and financially we had quite a nice reserve," Newman said. "We've taken all the services offered at the house on Collingwood [Street] and are doing it virtually."

But not everyone is so lucky, Newman said.

"Trans women of color seem to be in more of a dire need, I would say, out of the LGBTQIA community, than anyone else," Newman said. "Most don't have a permanent job and permanent housing. We have been working with service organizations to get trans folks of color housed so we can get them off the street. They've been more harmed during COVID than anyone else — that's what we noticed."

In an effort to meet that need, San Francisco officials recently announced that $1.6 million in grants for Black trans programs and those serving other LGBTQs of color would be awarded over the next two years. The B.A.R. reported last week that nonprofits can now apply.

A majority of the nonprofits in the Horizons survey received COVID-specific funding from outside sources, including 51% from the federal Paycheck Protection Program, or PPP. However, while all the organizations with a budget of over $1 million received a PPP loan, only 19% of organizations with budgets of under a quarter-million dollars received one.

Doughty said that he is concerned nonprofits will see an even greater rise in the demand for services considering the more recent congressional and presidential inaction on providing them, just at a time when nonprofits may be crunched even more. Over the weekend, CBS News reported that congressional leaders reached a deal on a $900 million COVID economic relief package that would see most Americans get $600, and $300 in enhanced unemployment for 10 weeks. The House and Senate have each passed the measure.

State and local governments face dire shortfalls in their own budgets.

"In the midst of this terrible surge, there's uncertainty about help from any part of government," Doughty said. "The city of San Francisco alone is looking at a significant deficit. So where will help come from? Nonprofits."

San Francisco Mayor London Breed last week directed city departments to reduce costs, which could result in layoffs. The city has another projected deficit of $653.2 million over the next two years. The city already closed two big budget holes earlier this year.

Doughty is encouraging people who can to open their pocketbooks this holiday season to make year-end donations to nonprofits.

"Every dollar organizations get will translate to their ability to serve and advocate," Doughty said. "While we are at a particularly challenging place in the pandemic, we have hope from the advent of a vaccine and the change in Washington. It's going to take us time past the vaccine for the community to return. It will not happen with simply one getting a shot."