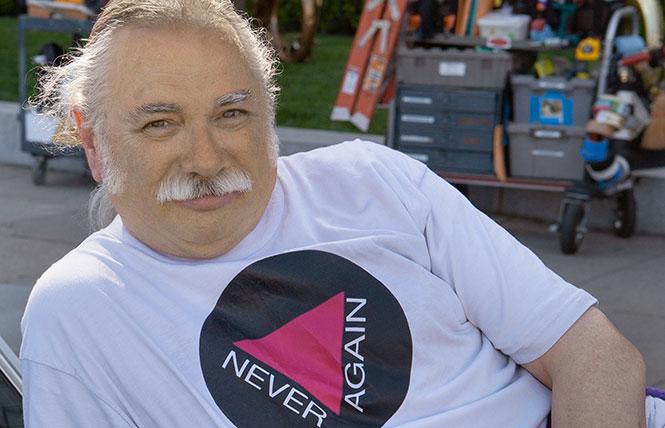 Back when LGBTQs in San Francisco were starting to flex their political muscle, Terry Henderling was one of the co-founders of the Gay Democratic Club, which was renamed in honor of Harvey Milk after the gay San Francisco supervisor was slain in 1978.

In addition to being an early leader of what is now known as the Harvey Milk LGBTQ Democratic Club, Mr. Henderling was involved in the Butterfly Brigade, an early safe-street patrol program, his friends Randy Alfred and John Blackburn wrote in separate emails to the Bay Area Reporter.

After disgruntled ex-supervisor Dan White assassinated Milk and San Francisco mayor George Moscone, Mr. Henderling for a time was the custodian of Milk's materials. That was after Milk's lover, Scott Smith, died in 1995. According to Alfred and Jim Gordon, Mr. Henderling received permission from Smith's mother, Elva, to serve as caretaker of Milk's memorabilia until its transfer to the GLBT Historical Society, of which Mr. Henderling was also a co-founder.

But it was in local politics that Mr. Henderling is best known. According to Blackburn's longtime partner, Bob Heacock, Mr. Henderling, Gordon, David Goldman, and others were "at the famous meeting in Yosemite where Chris Perry [Heacock's former lover] suggested forming a Democratic club with the word 'gay' in the name," Blackburn wrote. "If politicians wanted the endorsement of the gay community, they would have to put the word 'gay' in the name of the club that endorsed them."

Mr. Henderling worked on Milk's winning supervisorial campaign in 1977, and worked in Milk's City Hall office as a community adviser. Other people also served in that capacity, Blackburn noted.

"Terry was very much in the thick of things," Blackburn recalled, adding that he and Gordon were inseparable.

"Jim and Terry ended up being delegates to the San Diego State Democratic Convention," he wrote. "The goal of attending the convention was to get the convention to condemn the Briggs initiative."

That anti-gay ballot measure was on the 1978 California ballot and would have barred gays and lesbians from working in California public schools. Milk was a major force on the anti-Briggs campaign, along with others such as Gwenn Craig and Sally Gearhart. Voters defeated the measure in a major victory for LGBTQ rights.

Early life
Mr. Henderling was born D.W. Terrance Henderling on August 30, 1941 in Burlington, Vermont. He grew up in Hartford, Connecticut.

Blackburn said that Mr. Henderling's family was poor and that he had difficulty growing up because of his effeminacy.

"Terry was never butch — that's putting it mildly," Blackburn recalled. "He never fit traditional masculine roles, and of course his famous, and one-and-only laugh (high-pitch cackle) was world-renowned. When he was amused, his cackle could be heard for a vast distance!"

Mr. Henderling served in the Navy but received an undesirable discharge because he was gay, Gordon stated, adding that his discharge was later upgraded to at least general. Blackburn said that Mr. Henderling had VA benefits that helped care for him in his later years.

Mr. Henderling is survived by his longtime boyfriend, Edward C. "Eddie" Anderson. He was not able to be reached for comment.