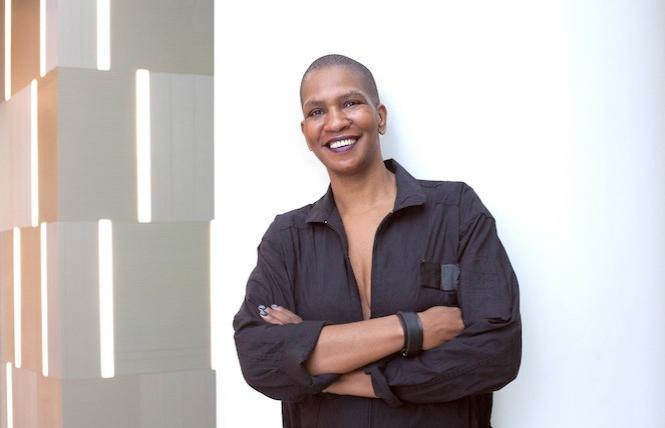 On this week's Out in the Bay radio show and podcast, Sneed reads four poems from her new memoir, "Funeral Diva," and shares moments from her life story. The book, published by San Francisco's City Lights, is a powerful collection of poems and prose described as a "coming of age in New York City during the late 1980s."

In her book, Sneed chronicles her journey as a proud Black lesbian and the impact of the AIDS pandemic on Black queer life, and gives often searing commentary about today's COVID-19 pandemic, divisive politics and pervasive social inequities.

Sneed takes us to Ghana slave ports and the streets of New York, tackling topics from the history of slavery to millennial gentrification (skewering "tech zombies" along the way) and health care disparities. Her poem "A Tale of Two Pandemics" starts:
"The headline in yesterday's news blared
A Tale of Two Pandemics
Shocking Inequities in the Healthcare System
what got me was use of words 'shocking' and 'two' ..."

Yet in "Why I Cling to Flowers," she ends "Funeral Diva" on a softer, hopeful note. After describing in glorious detail the beauty of flowers, then the mounting deaths, her final lines are:
" ...If we can survive
have equipment means money
support conditions
There are also other possibilities
We can heal."

Sneed said she got the nickname "Funeral Diva" — which is the name of the book and a poem within it — during the worst of the AIDS pandemic in the late 1980s when she went to countless funerals of artists, writers, and other friends whom she was frequently asked to memorialize.

"I always wore these outfits, and I had a personality for each thing I went to, so then it really was like a wry, tongue-in-cheek kind of thing where I became, like, a funeral diva," she said.

Sneed said she hopes her book gives readers courage. "I guess people are attracted to my work because I speak the unspeakable," she said. "And so I hope that that's what I do. That freedom of thought and of mind and of identity comes through."

Hear Pamela Sneed read four poems from "Funeral Diva" and talk about her life on this week's Out in the Bay — Queer Radio from San Francisco. The program re-airs at 9:30 a.m. Saturday, December 12, on KSFP 102.5 FM in San Francisco only, and is available anytime on Out in the Bay's website. Out in the Bay also airs at 10 p.m. Tuesdays on KALW, 91.7 FM throughout the Bay Area.

Eric Jansen is primary host and managing producer of Out in the Bay - Queer Radio from San Francisco. Learn more and listen at https://www.outinthebay.org/.