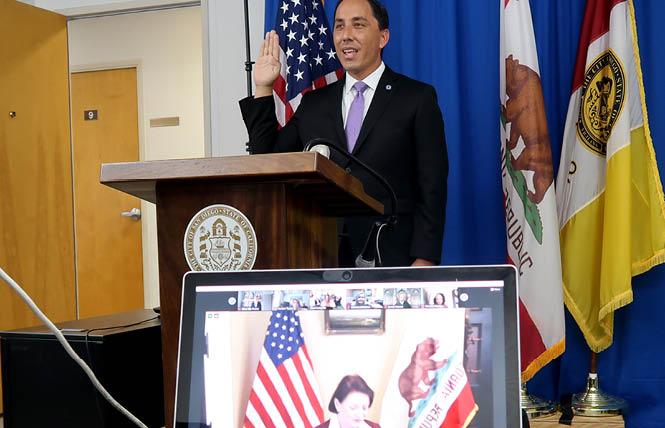 He is the first LGBTQ person elected mayor of one of the Golden State's largest cities. With 1.4 million residents, San Diego is the eighth-largest city in the country and the second largest in the state. And the 42-year-old Gloria is now one of only a handful of out mayors overseeing major metropolitan areas in the U.S.

"This is more than inauguration day for me. It marks a new chapter in San Diego's history," said Gloria. "Today is the first day of building a San Diego that truly is for all of us."

It is a return to the role of mayor for Gloria, a former city councilman, as he briefly held the position six years ago on an interim basis due to the resignation of former mayor Bob Filner amid sexual harassment accusations. Gloria went on to serve in the state Assembly and was the odds-on favorite to succeed termed out San Diego Mayor Kevin Faulconer, a Republican now eying a possible run for governor in 2022.

Lesbian state Senate President pro Tempore Toni Atkins (D-San Diego), who also briefly served as interim mayor during another scandal that rocked San Diego, administered the mayoral oath of office to Gloria remotely, as the December 10 inauguration ceremony for the mayor and other local officials elected in the November 3 election was held virtually due to the COVID-19 pandemic.

Gloria, who succeeded Atkins both on the City Council as the representative for San Diego's 3rd District and in the lower chamber of the state Legislature, sported a purple tie and dark suit as he took his oath of office. Gloria is a third-generation San Diegan and is of Native American, Dutch, Puerto Rican, and Filipino ancestry.

All smiles after being sworn in, Gloria thanked his partner, Adam Smith, parents Phil and Linda Gloria, his brother, staff members, city employees and "all the people who have mentored me and supported me over the years." He particularly thanked Atkins and another lesbian pioneering leader, former state Senator Christine Kehoe, the first out elected City Council member in San Diego.

"It is with pride that I stand before you today as San Diego's 37th mayor. I am hopeful about the future of our city," said Gloria.

Thirty-two years ago I was a finalist in the Mayor For A Day essay contest. Tomorrow I'll be sworn in as my hometown's 37th Mayor. San Diego is an incredible place. My goal is to open the doors of opportunity wider for more of our city's residents. #ForAllofUs pic.twitter.com/Wd8p57jFKZ— Todd Gloria (@ToddGloria) December 10, 2020

In a tweet the day prior to his December 10 swearing in, Gloria noted that 32 years prior he was a finalist in the Mayor For A Day essay contest. He pledged as mayor he would "open the doors of opportunity wider for more of our city's residents."

During his speech Thursday morning, Gloria noted that as a kid growing up in San Diego he didn't see anyone who looked like him leading the city. With San Diego being "the birthplace of California and a bridge" between America and Mexico, he said it was about time to the leadership at City Hall reflected the city's diversity.

"I am the first person of color and LGBTQ person to ascend to our city's highest office. It is a testament to what we all know. San Diego is a unique place with incredible people where anything is possible," said Gloria, adding, "the son of a hotel maid and gardener who is a Native American, Filipino, Puerto Rican, gay Dutch guy just became your mayor."

Declaring that his mayoralty "is the dawn of a new era" for San Diego, Gloria argued it was time for the city to alter its outlook on itself and take a greater leadership role in the state, at the national level, and on the global stage.

"We are not just America's finest city. It is time to dare to be America's greatest city," said Gloria, where one's "ZIP code doesn't define your destiny."

Services strained by health crisis
Gloria is taking on the mayorship at a time when the city's resources are being stressed by the health crisis. And the pandemic has only exacerbated issues that San Diego has been grappling with for years like every other city in California, from a lack of affordable housing and a growing homeless population to calls for police reforms and more aggressive actions to reverse the effects of climate change. He pledged to tackle those issues head on as mayor in the coming months.

"San Diego is a big city; it is time we acted like it," said Gloria. "Over the next 100 days, we will dispense with the small issues past leaders struggled to resolve to focus on the biggest issues."

He pledged to work on the "long-term goal of building a more resilient city in the process. It is not enough to get things back to normal. Normal wasn't and won't be good enough. We will change the narrative not just for the privileged few but for everyone."

Stepping down today as a city councilwoman, having lost her bid to be mayor to Gloria, Barbara Bry joked that when she sought a council seat four years ago she had never ran for anything before "except maybe the bus." She expressed continued hope for the future of the city as it grapples with the myriad crises it is confronting.

"Many of our families are suffering through no fault of their own. The next mayor and city council will have hard choices to make," said Bry. "Over the long term I am confident in San Diego's future."

Sworn in Monday as a state legislator, gay Assemblyman Chris Ward (D-San Diego), who succeeded Gloria both on the City Council and now in the Legislature, said he was "excited and optimistic" about the city's new leaders and pledged to work closely with them while serving in Sacramento.

"I look forward to working with Mayor Gloria and our city attorney and all of the council members to ensure a more equitable and sustainable future for our city and our region," said Ward, a gay married father of two children. "I love this work and I love our city."

Succeeding Ward on the council is gay Councilman Stephen Whitburn, who asked Kehoe to administer his oath of office this morning. He said he was proud to be the fifth LGBTQ leader to serve in the District 3 seat and continue that out leadership lineage first established by Kehoe in 1993.

"It is a wonderful way to begin serving the 3rd District and our city," said Whitburn, adding that today marked a "historic moment" in San Diego as its leaders are "more aligned on issues than that of any other time in recent memory. It is an opportunity to advance past the us versus them mentality that has prevailed in San Diego for so long."

An emotional queer City Councilwoman Georgette Gómez bid adieu to her colleagues and constituents during the online ceremony, having lost her bid for Congress this year. She stepped down after four years representing the city's 9th District and the past two years as council president.

"I worked to create a local government more equitable, more inclusive, more transparent, and more accountable to we the people," said Gómez. "I am proud of what we have achieved by working together to advance new approaches to the critical challenges facing all residents of San Diego."

She expressed confidence that she was leaving the city under good leadership in the new mayor and city council makeup.

"To the incoming mayor and council members, we know finding the path forward isn't always easy. But the work that we all have been allowed to do to represent our residents is truly worthy and taken with great honor," Gómez said. "Especially during these difficult times, residents of San Diego are looking for strong leadership. I know you all will do the work on behalf of San Diego."