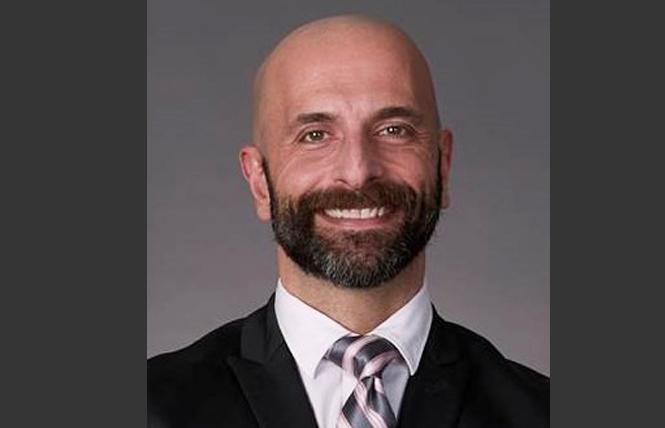 The Centers for Disease Control and Prevention announced this week that a gay physician has been named director of the agency's Division of HIV/AIDS Prevention.

Dr. Demetre Daskalakis, a longtime leader in HIV, was appointed director of DHAP for the CDC's National Center for HIV/AIDS, Viral Hepatitis, STD, and TB Prevention in Atlanta. The appointment is effective December 21.

Daskalakis, 47, is an associate clinical professor of medicine who serves as the medical residency director of resident research and as the infectious diseases program director at the Icahn School of Medicine at Mount Sinai in New York. In addition to caring for people with HIV at the Bellevue Hospital Center, he is the founding director of the Men's Sexual Health Project, a research program extending clinical and research services to commercial sex venues catering to men who have sex with men in New York City.

He recently served as deputy commissioner for the Division of Disease Control at the New York City Department of Health and Mental Hygiene. A specialist in infectious diseases, Daskalakis has authored more than 50 scholarly articles and has received numerous awards for his scientific and public health contributions, including Treatment Action Group's Research in Action Award.

In a November 17 CDC news release, Daskalakis spoke about why he was drawn to HIV work and improving the health of underserved communities.

"I still get emotional talking about the early days of the AIDS epidemic not because I'm sad, but because I can't believe how different the story is today," he stated. "We have the tools at our hands to prevent infection and to keep people living with HIV healthy. Our barrier to achieving this vision is no longer science, it is systemic racism, sexism, homophobia, and transphobia."

Grossman, a gay man and medical director of Midway Specialty Care in Wilton Manors, Florida, wrote in an email to the Bay Area Reporter that Daskalakis "has done amazing work in New York for a long time and hopefully his appointment will bring fresh ideas and solutions to CDC and finally help us lower the rate of new HIV infections in the whole country, just as he's done in New York City."

Commenting on the appointment, San Francisco AIDS Foundation CEO Joe Hollendoner, a gay man, wrote in an email to the B.A.R.: "We congratulate Dr. Demetre Daskalakis on his appointment as the CDC's Director of the Division of HIV/AIDS Prevention. He is a proven public health leader in whom I have great confidence to advance our country's efforts to End the HIV Epidemic.

"We look forward to working with Dr. Daskalakis, as well as members of the incoming Biden-Harris administration, to address the health disparities that continue to prevent our nation from achieving zero new cases of HIV and zero AIDS-related death," Hollendoner added.

Dr. Jonathan H. Mermin, director of the CDC's National Center for HIV/AIDS, Viral Hepatitis, STD, and TB Prevention, referenced Daskalakis' work on New York's Ending the Epidemic. The federal Ending the Epidemic program is a 10-year initiative that aims to reduce new HIV infections to less than 3,000 per year by 2030.

Mermin, who is also assistant surgeon general of the U.S. Public Health Service, said in the release that Daskalakis was "integral in designing and leading many HIV and [sexually transmitted disease] programs in New York City, including their Ending the Epidemic program, which is credited with decreasing HIV incidence to a historic low. We are excited for him to bring this leadership and experience to CDC to advance meaningful research, guide surveillance and programs, support and implement effective policy, and ultimately prevent HIV infections and increase HIV-related health equity across the United States."

"Dr. Daskalakis is recognized nationally and internationally as an expert in HIV prevention and has focused much of his career on the treatment and prevention of HIV and other STIs as an activist physician with a focus on LGBTQIA+ communities. He has also dedicated much of his time to improving the health of underserved communities and is passionate about addressing health equity," Mermin added.