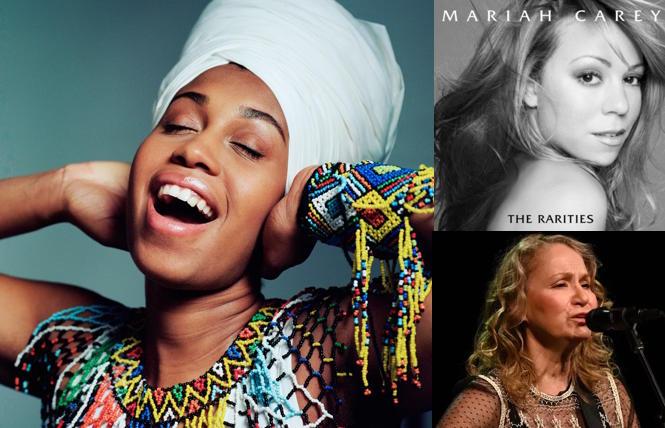 Young and rising jazz vocalist and songwriter Jazzmeia Horn has been stirring things up since she won the Thelonious Monk Institute International Jazz Competition in 2015. Her debut album A Social Call earned Horn a Grammy nomination, as did its follow-up Love & Liberation (Concord). When you hear her cut loose on the Jon Hendricks/Hubert Laws song "No More," it's easy to understand why she has become such a sensation. Her scatting on the original compositions "When I Say" and "Searchin'" (as well as her rapid-fire delivery), in addition to her ability to make Jimmy Van Heusen and Johnny Mercer's "I Thought About You" her very own, prove she is an unstoppable force.

Suzzy Roche plays well with others. For years, she was best known as one third of the harmonious sister act The Roches. More recently she has been singing and performing concerts with daughter Lucy Wainwright Roche (whose father is Loudon Wainwright III). On I Can Still Hear You (Storysound), Suzzy and Lucy join forces and the results are as exceptional as you might imagine. What's truly remarkable is the way mother and daughter blend while also maintaining their own musical identities.

For example, "Ruins" and "Swan Duck Song," both written by Suzzy, sound like they could be lost songs by The Roches, right down to the lyrics and the arrangements (especially "Ruins"). On the other hand, the title cut, written by Lucy, would be right at home on her 2018 album Little Beast. "Get The Better," the lone co-write on the album, is a perfect merger of their combined talents. The album also features marvelous cover selections, including Joe Raposo's Kermit theme song "Bein' Green" and the traditional "Factory Girl" (featuring Indigo Girls Amy Ray and Emily Saliers on backing vocals).

It's been 25 years since Joan Osborne's cover of Eric Bazilian's "One of Us" became one of the biggest hit singles of the late 20th century. While a few years passed between the release of 1995's Relish and its 2000 follow-up, Righteous Love, Osborne has remained extremely productive throughout the 21st century, putting out ten albums, including her latest Trouble and Strife (Thirty Tigers/The Orchard). A musical response to the Trump presidency, the album is definitely one of Osborne's political statements, as you can hear on powerful tracks such as the blistering "Hands Off," as well as "What's That You Say," "I Will Never Get Tired (of Loving You)," "Whole Wide World," and "Panama."

Eight years between studio albums is a long time, but B7 (Brand Nu/eOne Records) the new album by Brandy was worth the wait. After so much time away, and to ease her listeners back into her groove, Brandy opens the album with "Saving All My Love," a track that fits well into her repertoire. But before you know it, Brandy makes waves with "Unconditional Ocean." B7 is at its most magnetic when it strikes the balance between the Brandy of the past and the present, as it does on "Borderline," "Baby Mama" (featuring Chance the Rapper), "High Heels," "I Am More," and "By BiPolar" (in which she addresses her experience with depression).

Comprised of 15 previously unreleased and rare recordings from 1990 to 2020, the first disc of Mariah Carey's cleverly titled The Rarities (Columbia) double CD set perfectly illustrates the way she transformed from spectacular vocalist to spectacle. Early Carey co-compositions from the 1990s, including "Can You Hear Me" (co-written with music legend Barry Mann), "Here We Go Around Again" and "Everything Fades Away" benefit from somewhat more restrained production than the approach she took in later years. A pair of covers — "Out Here On My Own" (from the movie Fame) and a live rendition of "Lullaby of Birdland" — highlight Carey's skills as an interpreter. The second, 17-track disc in the set, consists of a 1996 live recording from the Tokyo Dome.