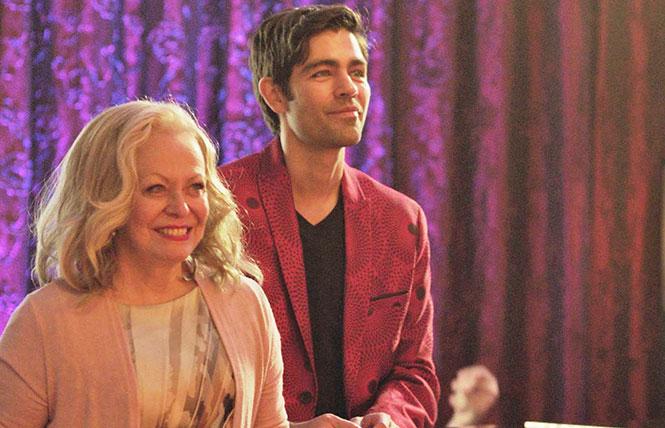 There's so much familiar territory visited in gay writer/director Thom Fitzgerald's Stage Mother (Momentum) that watching it conjures feelings of déjà vu. A gay son is abandoned by his religious southern family, but his mother undergoes a kind of spiritual awakening and sees the error of her ways. We saw it in the 1991 TV movie Our Sons (Ann-Margret played that mother) and we saw it more recently in Yen Tan's devastating 1985 (in which Virginia Madsen portrayed that mother) in which AIDS was the driving force.

Fitzgerald dealt with AIDS in his 2003 movie The Event, as well as in 2005's 3 Needles. Even though the AIDS crisis is far from over, it isn't the reason for the familial strain in Stage Mother, written by Brian Hennig (The Hot Flashes). In this case, it's a son who was too much of mama's boy (read: effeminate) for his macho father Jeb (Hugh Thompson) to understand. On the other hand, diminutive mother Maybelline (Jacki Weaver — the best part of the movie), a Southern Baptist choir mistress, loved her son, while not completely accepting him.

As an adult, Maybelline and Jeb's son Rickey (Eldon Thiele), left Red Vine, Texas for San Francisco and never looked back. He became a successful drag performer called Rickey Pedia, made enough to become owner of Pandora's Box drag show lounge, to afford a decent apartment in San Francisco and landed himself a hot lover named Nathan (Adrian Grenier). But Rickey's downfall was drugs and alcohol, which led to an onstage overdose and his death. 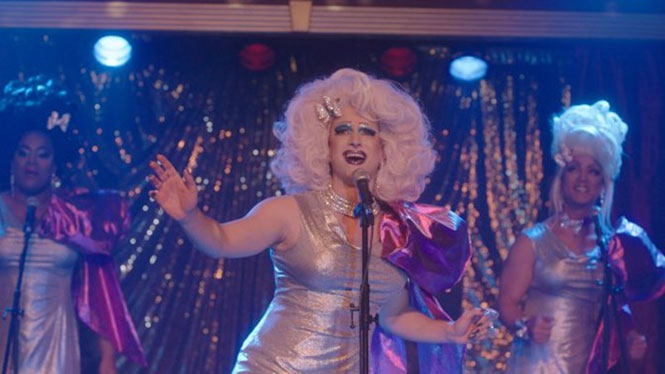 Maybelline heads to San Francisco, alone, for Rickey's memorial service. Nathan wants nothing to do with her, but Rickey and Nathan's neighbor Sienna (a bleach blonde Lucy Liu) is more welcoming. A single mother whose baby is named for Rickey, Sienna arranges a dinner with Maybelline and Nathan during which Maybelline gets an earful. Among the things she learns is that because Nathan and Rickey weren't married, Nathan doesn't have a leg to stand on. He must move out of the apartment they shared, and he has no claim to Pandora's Box which he managed for Rickey.

As if to make up for past hurt to her son, Maybelline steps up to become the stage mother she was born to be. She organizes a new revue at the club featuring Cherry (Mya Taylor of Tangerine fame), Joan (Allister MacDonald) and Tequila (Oscar Moreno) singing in their own voices. When asked how her experience as choir mistress qualifies her to do this, she says, "Different songs, same divas. Some of the same wigs, too."

She spruces up the club. Eventually she forges a connection with reluctant Nathan. She also helps Joan get clean, facilitates Tequila's reconnection with his mother, convinces Cherry to come out as trans to his estranged wife, and rescues Sienna from the hands of an abusive lover. Additionally, she finds time to spend with a new friend, August (Anthony Skordi), a concierge at the Fairmont.

But Jeb, who shows up and surprises Maybelline in San Francisco, wants her to come back to Texas. They strike a deal, but it's obvious after she gets back to Red Vine that she's miserable. You can probably guess what happens after that. Two words: big finish.

Fitzgerald keeps things lively and gets a strong performance out of Weaver. Grenier, who played gay in 2015's Sex, Death and Bowling, continues to coast along on his looks alone (lucky him). Fitzgerald, who has previously written or co-written the movies he's directed, should return to that more successful formula. Rating: C+