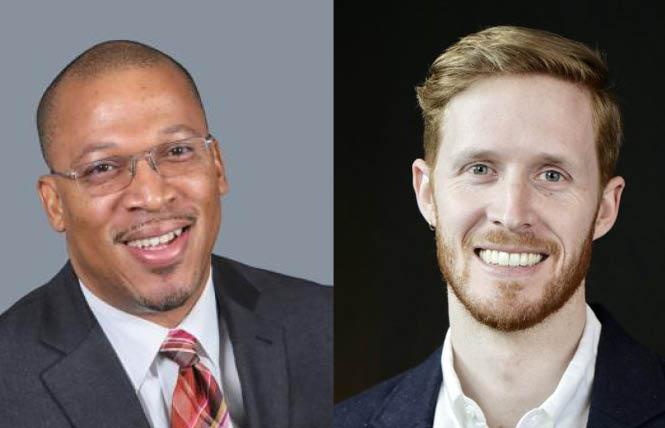 All told, foundation funding for Black LGBTQ communities in the United States totaled $7.4 million in 2018, according to the study, up from $5.4 million the previous year. According to a report from the same organization released earlier this year, the total of all 2018 LGBTQ grantmaking was $209.2 million.

The study was produced by the nonprofit organization Funders for LGBTQ Issues in partnership with ABFE: A Philanthropic Partnership for Black Communities.

The study also found that Black trans and gender-nonconforming people received less than 1% of all the funding for LGBTQ issues that year.

The grant money reviewed by the study covered 2018.

"The funding data was sourced from our 2018 Tracking Report, our annual report on the scope and character for foundation funding for LGBTQ issues from U.S. foundations," Andrew Wallace, the acting vice president of research and communications for Funders for LGBTQ Issues, wrote in an email to the B.A.R. "We surveyed the 2018 grantmaking study of nearly 1,000 philanthropic entities in search of LGBTQ funding and code each grant by geography, population, and issue served."

According to the study, 42% of the funding went to issues related to health and well-being, such as addressing the HIV epidemic. Thirty-four percent went to address issues of civil and human rights; 10% went to communities, families and visibility, 4% went to education, and 5% went to other issues.

Edward Jones, the vice president of programs for ABFE, discussed how the calls for attention to the epidemic of violence against Black trans women have not resulted in a huge amount of philanthropic attention.

"The assaults and killing of trans women and men have never been deemed 'important' in the press and amongst populations," Jones, who is Black, wrote in an email to the B.A.R. "Trans people have routinely been treated poorly — even amongst gay people. Imagine the pain of being discriminated against by people in your own community.

"By exposing the story and providing data about the unconscionably wide disparities of funding support for Black-led/focused organizations, we hope it stirs funders to pay attention in ways that translate to actual increases in funding," Jones added.

Wallace stated that funding has improved in recent years.

"We have documented important increases in philanthropic support for trans communities," Wallace, who is white, wrote. "While these gains are critical, they do not make up for a historical lack of investment or adequately address the current reality of the threat to trans people and Black trans women in particular."

Gilead did not immediately respond to a request for comment.

While annual HIV diagnoses declined by 15% in the U.S. from 2010-2017, they have increased among Black gay and bisexual men by 42%, according to statistics from the U.S. Centers for Disease Control and Prevention cited in the study.

"Structural racism and persistent disparities in rates of poverty, homelessness, and lack of access to health care are the primary causes of the ongoing crisis of HIV in communities of color in the United States," Wallace wrote. "We will not address the disproportional spread of the virus without tackling these deeply rooted issues first."

Jones wrote that philanthropic organizations need to listen to the needs of Black people before trying to help.

"Don't enter into space and tell Black LGBTQ-led/focused organizations what they need — ASK," Jones wrote. "Because you know some Black people doesn't mean you know the solutions. Be intentional in learning about the people you say you want to support. Listen. Learn. Build trust."

Wallace is hopeful that efforts this year to be more mindful of the need for Black inclusion and support in organizations will be helpful.

"We welcome the recent outpouring of support — financial and otherwise — in the past few months, but these efforts will only matter if they are sustained in the months and years ahead," Wallace wrote, referring to donations during the protest marches amid a resurgence of the Black Lives Matter movement. "One thing that we will be monitoring in the years ahead is how much of recent increases in funding for racial justice in LGBTQ communities is flowing to Black-led organizations."

Jones was less sanguine about the prospect. He brought up the Kerner report, which was commissioned by President Lyndon B. Johnson in the late 1960s and found that "our nation is moving toward two societies, one black, one white — separate and unequal" and that white people, society, and institutions created and maintained structural racism.

"This moment of race, racism, anti-Black racism is in the headlines now, just as it was when the Kerner Commission released its report 52 years ago, and when ABFE was founded 49 years ago," Jones wrote. "These efforts are only nascent to those who don't know the history. America — and the world — has a cynical response to racial reckonings and crises. The knee-jerk responses may mitigate the prevailing issue, but we don't have the attention span to keep checking to make sure the changes are taking hold. That's key to activating change for the long haul."