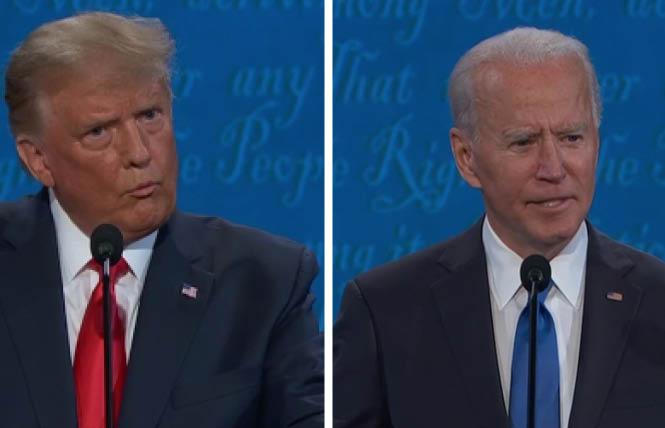 President Donald Trump and former vice president Joe Biden took swipes at one another during the final debate October 22. Photo: Screengrab via CNN

In the final 2020 presidential debate, Thursday night, President Donald Trump and former vice president Joe Biden were threatened with muted mics. But that didn't stop Trump from interrupting as he did during his previous one-on-one with Biden, but ironically that made him fare worse because he wasn't able to block Biden from giving a more sophisticated performance.

From the first question in the debate on the coronavirus until the end, Biden showed a range of maneuverability in being able to talk about policy issues to being able to appeal to emotion when the moment demanded for it and even whomped Trump with a zinger or two. Trump, on the other hand, didn't show the same scope, often resorting to talking points and hammering Biden with taking payments from foreign countries, for which there is little evidence.

At the start of the October 22 debate, Trump downplayed the impact of the coronavirus had on the United States, saying without his polices 2.2 million people would be dead, and backtracked on his promise to have a vaccine ready by Election Day, while Biden recognized the 220,000 who've died of COVID-19 and said to prepare for a "dark winter" because the death toll is likely to rise.

Biden was able to make an appeal to emotion when he said separating children who came across he border from their families "makes us a laughingstock and violates every notion of who we are as a nation," while Trump insisted the children "are so well taken care of" and "they're in facilities that were so clean" as he insisted many were brought by coyotes, not their parents.

When the issue came to health care, Trump (who has yet to come up with a health care plan he has promised for some time) said Biden wanted to end private health insurance, which would be inconsistent with Biden's plan to build on the Affordable Care Act. Trump went on to say Bernie Sanders had tried that health plan in his Vermont, but it didn't work out, giving Biden an opening for a dig.

All throughout the debate, Kristen Welker of NBC News, who served as moderator, kept both candidates to the rules and asked questions on news of the day as well as policy issues that don't get as much attention. The candidates' microphones were going to be muted when they weren't speaking, part of a rule change from the Commission on Presidential Debates after the first combative free-for-all last month.

Trump tried to shake things up with a developing news story on alleged Hunter Biden emails indicating Biden's son set up with his dad meetings with the head of a Ukrainian energy company and arranged for cash payments from China.

Biden, however, said he has never "taken a single penny from a foreign source ever in my life," denying the story for the first time, then rejecting the entire premise as irrelevant to voters.

"There's a reason why he's bringing up all this malarkey," Biden said. "There's a reason for it. He doesn't want to talk about the substantive issues. It's not about his family and my family. It's about your family, and your families hurting badly."

At times, Trump said things that were demonstrably false, such a statistic that 1% of immigrants in catch-and-release never show up for their date in immigration court (his own administration officials have said it's closer to 50%), and accusing Biden of using the term "superpredators" to refer to Black men with criminal records (fact-checkers have confirmed Hillary Clinton said that, but Biden never used the term once).

Toward the end of the debate, Trump appeared to try to make up for lost ground by seizing on Biden's comment that he'd transition away from oil energy, which Trump repeated was a "big statement" for voters in competitive states like Texas and Pennsylvania.

Biden, however, remained calm and developed his vision further for what his transition away from fossil fuels would look like.