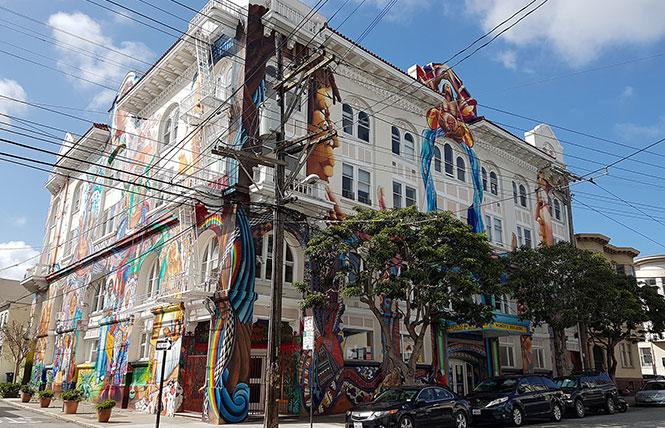 The Women's Building has begun an interior painting project that's funded by a grant from Benjamin Moore through the National Trust's campaign, Where Women Make History.

Benjamin Moore is providing the paint and the project will enhance the grand staircase that extends four flights and showcases the Mission district building's colorful mural, which was continued inside the building in 2009. The mural extends up to the second floor adorned with calligraphy names. The community resource room and the mailroom are also being repainted.

The project, which started October 5, is expected to be completed soon. It comes at a good time as the building is currently closed to nonessential programming due to the novel coronavirus pandemic. The Women's Building is home to nine other nonprofits. Those that are essential and continue to operate are the Women's Building Food Pantry, Dolores Street Community Services' kitchen, the Cooperative Restraining Order Clinic, the Immigration Center for Women, and the Children and Head Start Childcare Center.

"It's such a pleasure to be recognized by a prestigious business like Benjamin Moore and the National Trust," Women's Building Executive Director Teresa Mejia stated in a news release.

The Women's Building is an anchor institution in the community. In 2018, the National Park Service officially recognized it as a national historic site.

As the Bay Area Reporter has previously reported, the Women's Building was founded in 1971 by a group of women that included a number of lesbian leaders, such as Roma Guy, whose life and advocacy for the building was in the 2017 ABC miniseries "When We Rise" about a number of LGBTQ San Francisco leaders.

In 1979 the Women's Building moved into its current location, at 3543 18th Street near Valencia Street, where it has hosted numerous meetings of LGBTQ groups and conferences over the years. The building is also a city landmark, though it was listed for its historical significance predating the modern LGBTQ rights movement.

A Benjamin Moore representative stated in the release that the project will enable the Women's Building to experience the "transformative power of paint [and] reap the rewards of color expertise that only Benjamin Moore, with our 135-plus year history, can provide."
Benjamin Moore is a Berkshire Hathaway company and was founded in 1883.

Bivett Brackett, Tuquan Harrison, Diana Feliz Oliva, and Joshua Smith formally joined the board October 7. They were joined by Elizabeth Lanyon, who was reelected. Their terms go until 2023, according to SF Pride.

According to an email from SF Pride, board members Amy Sueyoshi, Nicky "Tita Aida" Calma, and Jake Little stepped down after years of service.

For more information about upcoming meetings, go to https://members.sfpride.org/

The forum will center and empower the lives of Black people, according to an email.

It is organized by Openhouse's Leadership Council on Race and Privilege, a member-initiated working group of the LGBTQ senior nonprofit.

ALRP reception to go online
The AIDS Legal Referral Panel's 37th anniversary From the Heart reception and auction will be held online Wednesday, October 21, from 6 to 7 p.m. It will be livestreamed on the agency's YouTube channel.

ALRP will recognize Michael Steel, who will receive this year's Clint Hockenberry Award, and panel attorney James A. Dal Bon, the recipient of the agency's Attorney of the Year Award. Firm of the Year will be presented to Wilson Sonsini Goodrich and Rosati Professional Corporation.

ALRP Executive Director Bill Hirsh said that Steel is being honored for his "years of dedication and support of people living with HIV/AIDS."

ALRP has been providing legal services to people living with HIV/AIDS during the pandemic either for free or on a sliding scale.

The reception will include an online and live auction, with a special kickoff from members of Cheer-SF. Auction items include getaway vacations to Palm Springs, Yosemite, and Sonoma Wine Country; and virtual items like a quarantine cooking class, a Zoom mixology class, and a Zoom wine tasting. Lunches with City Attorney Dennis Herrera and gay District 8 Supervisor Rafael Mandelman are also up for grabs, along with a Drinks and Drag delivery. More information is at https://alrp2020.ggo.bid

Individual tickets to the reception are free but registration is requested and can be done via https://alrp.ejoinme.org/ALRP2020

For more information on ALRP and its services, visit http://www.alrp.org