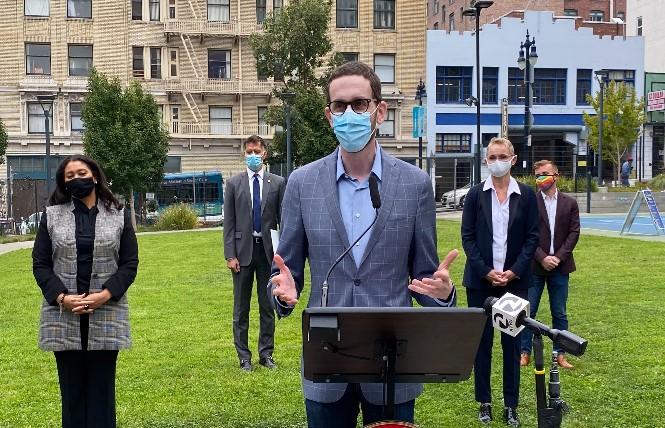 "The war on drugs has failed," Wiener, a gay man, said. "Criminalizing addiction is not effective, and in fact it makes the problem worse. We need to treat drug use as the public health issue it is, not a criminal issue."

This is not Wiener's first attempt to authorize supervised injection sites in California. In 2018, a bill he co-sponsored with lesbian Assemblywoman Susan Talamantes Eggman (D-Stockton) passed the Assembly and Senate but was vetoed at the last minute by outgoing Governor Jerry Brown.

A narrower bill that applied only to San Francisco passed the state Assembly last year but was tabled in the Senate after Oakland officials indicated that they wanted to be included as well. This year's attempt (Assembly Bill 362) was halted over the summer because of a reduction in legislative activity due to COVID-19.

San Francisco Mayor London Breed and the Board of Supervisors strongly support the legislation. In June, the board approved legislation that will permit nonprofit organizations to operate supervised injection sites if they are sanctioned by the state.

"When you have people you know and love who struggle with addiction, the thing you want most is a better life for them. You want them to be able to get help and you want to make sure addiction doesn't take their life," Breed, whose sister died of a drug overdose, said at Thursday's news conference. "We can't control people and their addiction, but we can be there for them. ... Why not give it a try, because what we're doing now is not working."

Oakland Mayor Libby Schaaf was also scheduled to appear and offer her support for the legislation, but was held up by traffic on the Bay Bridge. Wiener said that he is open to adding other cities that wish to be included to the bill.

"Oakland is a compassionate city and overdose prevention sites can save lives and spare families the horrific pain of losing loved ones," Schaaf said in a news release. "These sites can help people who suffer from drug addiction get on a path to healing, as well as manage the impacts our entire community experiences when we allow drug illness to go untreated."

Supported by the data
Supervised injection facilities allow people to use drugs under the watch of trained staff, reducing the risk of overdose deaths. They provide sterile needles to prevent transmission of HIV and hepatitis B and C, and offer clients an entry point for seeking medical care and addiction treatment. Indoor sites also reduce street-based drug use and improper syringe disposal, a growing problem in the city. While there are currently no sanctioned injection sites in the United States, around 150 such facilities operate worldwide, including about 40 in Canada.

Estimates indicate that there are around 25,000 people who inject drugs in San Francisco. Although harm reduction programs widely distribute Narcan (naloxone) to reverse opioid overdoses, the arrival of fentanyl — which is much stronger than heroin — has contributed to a rise in overdose fatalities. Methamphetamine, which does not have a similar antidote, is implicated in a growing proportion of overdoses.

Overdose deaths rose 70% in 2019 and are trending up for 2020, according to San Francisco Health Director Dr. Grant Colfax, a gay man who also spoke at the presser. A recent report from the San Francisco Department of Public Health showed that 441 people died from drug overdoses last year.

"The need for this key public health intervention has never been greater," Colfax said. "The data, science, and facts show that safe injection sites do not increase drug injection, drug trafficking, or crime. ... We have some of the best behavioral health treatment in the world for people in our city. But we must do more. We need every tool at our disposal."

Health officials and advocates are concerned that the overdose crisis may be exacerbated by COVID-19.

"Overdose deaths are spiking, and many social service programs have had to close their doors for drop-in services," said HealthRIGHT 360 CEO Vitka Eisen. "There is a clear, pressing need and a moral imperative to open safe drug consumption services. Waiting to open these sites translates directly into preventable deaths."

Responding to critics of supervised injection who argue that it would encourage more drug use, Wiener said, "The reality is that people are already doing this. The question for the public is, would you prefer that people use drugs or inject on the sidewalks by your home or your business or the park you're using, or would you rather they do so inside a supervised safe, clean environment. I think most people would prefer the latter."

Lawmakers and advocates hope the forthcoming supervised injection bill, which Wiener plans to introduce once the Legislature is next in session — possibly as soon as December — will be more successful than previous attempts.

Although Governor Gavin Newsom has not said whether he would approve such legislation, he has previously spoken favorably about supervised injection sites as a public health approach.

Cities also face resistance at the federal level. Shortly before Brown's veto of the 2018 bill, then-U.S. Deputy Attorney General Rod Rosenstein penned an opinion piece in the New York Times reiterating the Trump administration's opposition and warning that cities and counties "should expect the Department of Justice to meet the opening of any injection site with swift and aggressive action."

Harm reduction advocates planned to open a supervised injection site in Philadelphia earlier this year, after a federal judge ruled that the facility would not violate federal drug laws, but that effort was put on hold due to community opposition, followed by the COVID-19 crisis.