Out in the Bay: Helping queer youth through COVID

by Eric Jansen and Kendra Klang 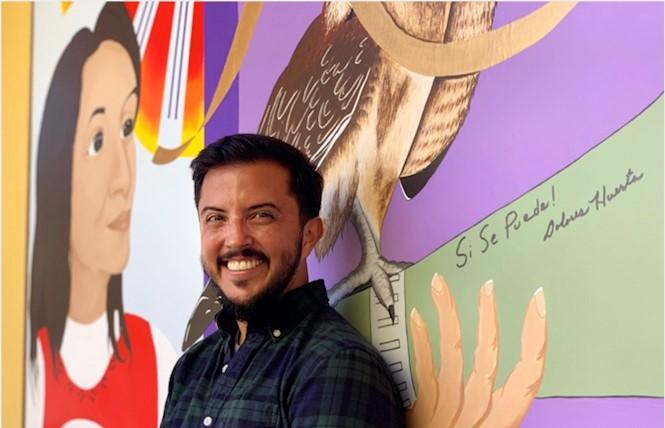 Mauro Sifuentes is an educator for LGBTQ+ justice and the LGBTQ programs coordinator at the San Francisco Unified School District. Photo: Erik Martinez/SFUSD

[Editor's note: This marks the beginning of a cross-promotion with Out in the Bay-Queer Radio. The Bay Area Reporter will post short summaries of the weekly show on Fridays, in advance of the encore broadcast on Saturdays at 9:30 a.m., on KSFP Radio, 102.5 FM in San Francisco only and available anytime here. B.A.R. staff will be contributing to the program monthly.]

Even before COVID-19 hit, queer young people were at higher risk than their heterosexual peers for depression, anxiety, suicide, and other serious mental health issues. School and college closures in the spring forced many to shelter in place with unsupportive, even hostile families and to lose social connections and services for LGBTQ youth.

The Trevor Project — the world's largest suicide and crisis intervention organization for LGBTQ youth — reported in April that calls to its hotline had more than doubled. Devin Green at the LGBT National Youth Talkline says its calls are also up substantially. Green says many young people who "believe that they're completely alone in their experience as an LGBTQ person" need to know there are others like them.

Therapist Rayne Banneck, facilitator of the Pacific Center for Human Growth's weekly Loving Ourselves and Uniting Diversity (LOUD) youth program in Berkeley, says the loss of social networks "has made a profound impact" on LGBTQ youth while the pandemic has exacerbated pre-existing stressors.

Mauro Sifuentes, LGBTQ programs coordinator at the San Francisco Unified School District, agrees. He says there has been a silver lining for some students, though. Those "used to hearing and experiencing harassment in schools," Sifuentes says, have found "a little bit of space" while at home.

The Pacific Center, SFUSD, and other organizations are offering ways for young people to connect via video, audio, or text. For some queer youth it works, but those without easy internet access are becoming increasingly isolated and difficult for support groups to reach. "We're seeing kids drop off due to lack of access to technology or parental monitoring," says Banneck.

Banneck and Sifuentes say confidentiality restrictions make it hard for counselors to offer follow-up support to those who disappear.

"In San Francisco, it's actually against the law to 'out' a student," says Sifuentes. "We can't just call up and say, 'Hey, this queer/trans kiddo living in your household, who was in this confidential group that maybe you didn't know about or might harm them for participating in, will you put them on the phone with this queer or trans adult?'"

Meanwhile, the pandemic has pulled resources and volunteers away from mental health providers and nonprofits. "Everyone who is still on the front lines," says Sifuentes, "is stretched even thinner than before."

Hear more from Green, Sifuentes, and Banneck on queer youth mental and social health during COVID in a recent discussion with host Eric Jansen on Out in the Bay-Queer Radio from San Francisco. It will be broadcast at 9:30 a.m., Saturday, October 3, on KSFP Radio, 102.5 FM in San Francisco only, and is available anytime on Out in the Bay's website, which also lists resources and services.