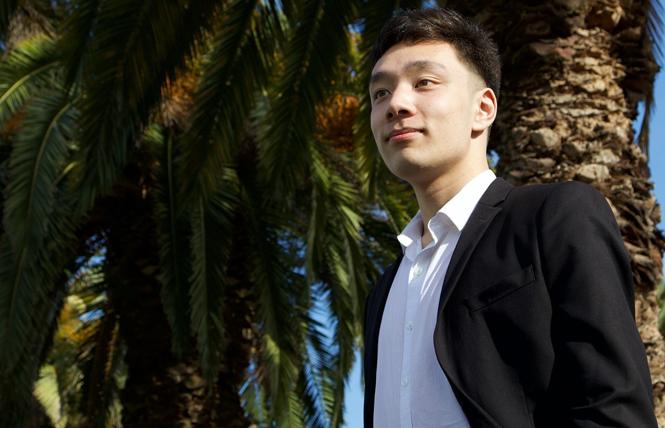 Over Labor Day weekend James Coleman returned to Harvard to pursue his degree in human developmental and regenerative biology with a minor in government. He expects to graduate in May.

In between his studies at the Cambridge, Massachusetts campus, Coleman is waging a campaign for a seat on the South San Francisco City Council. Should Coleman, 21, be elected to the council's newly created District 4 seat, he would be the youngest person serving on it. And Coleman, who is bisexual, would be the first out LGBTQ council member in his hometown.

He will be watching polling results come in from New England, as Coleman won't be back in California until close to Thanksgiving.

"I am here to finish my thesis and get some experiments done. I am working in the neuro science lab at Mass General," Coleman told the Bay Area Reporter during a phone interview from his dorm room.

While mounting a virtual bid for local office from a different state would likely have raised eyebrows in any other year, Coleman's doing so this fall is occurring during a global pandemic that has upended campaigning for candidates all across the country. The health crisis brought on by COVID-19 has curtailed most face-to-face political events and campaign tactics.

"It all works out in a weird way. I wouldn't be knocking on doors and talking to voters in person anyway," noted Coleman. "Even when I was back there, I wasn't talking to people; I was making phone calls and sending texts. There really is no face-to-face interaction."

Due to the health crisis, Harvard shut down its campus in March, and Coleman returned home to live with his mom. She emigrated from Taiwan to the U.S. and at first lived in Ohio, where his father, who was white, was from.

His parents moved to the Golden State shortly after having Coleman, who is an only child. His dad, who died in 2015, had worked for FedEx and became paralyzed from the waist down due to an accident. His injury led Coleman to seek a career in the neurosciences, and he plans to pursue a job in the stem cell or biotech field next year.

"I want to try to figure out how people can regenerate and heal," he said.

Coleman is one of more than 50 out LGBTQ candidates running for local office in the Bay Area this November. Like Coleman, many are young people of color who identify as part of the BTQ portion of the community's acronym and were inspired to seek public office after participating in the protests this year against police killings of Black people.

In May, Coleman became active with CHANGE SSF, short for the Coalition of Hope and Action Necessary for Growth and Empowerment-South San Francisco. It has been pushing the city to reallocate police funding toward more social services and other community needs but has been disappointed by the city council's response.

"We need more momentous change to meet the time we are in," said Coleman, who also wants the city to take bolder actions to address climate change and a lack of affordable housing. "If I am elected, I will push the City Council to adopt the many issues I am trying to champion in this city."

Involved in local politics since high school and while in college, Coleman decided to enter the council race since no one else had announced they would run against incumbent councilman and current mayor Richard Garbarino, who grew up in San Francisco and used to work for SF State. He and councilman Mark Nagales are the first of the council's five members to run in district elections; the other three will need to do so in 2022.

Nagales is running unopposed, while Garbarino is seeking his fifth four-year term having been first appointed to a vacancy on the City Council in December 2002. Since it isn't a citywide race, Coleman told the B.A.R. he felt he had a chance of winning a district-based seat against a sitting council member.

"This is the first time this City Council election is going to be by district rather than by at-large. You are dealing with a fifth of the voter base than you regularly would," noted Coleman. "It makes this race a lot more affordable and accessible to candidates such as myself."

As of September 19 Garbarino reported raising $11,797 this year and was sitting on $17,153 to spend on his reelection effort, according to his latest financial filing. Coleman reported he had raised $10,543 as of that date and had $6,288 to spend, though his campaign told the B.A.R. he has since netted more than $12,000 in total donations after officially entering the race in August.

"I am glad people are taking my campaign seriously. Just being so young, that is the biggest danger that people don't take your campaign seriously," said Coleman. "I am running a serious campaign and fundraising very well."

Coleman's ability to not only raise money but also garner a host of endorsements, such as from fellow Harvard alum gay state Senator Scott Wiener (D-San Francisco) who represents South San Francisco, led to the LGBTQ Victory Fund endorsing his campaign last week.

"James' commitment and collaborative approach to smart public policy that addresses the real concerns of constituents makes him the best candidate for District 4. When he wins in November, James will become a vital LGBTQ voice," stated Annise Parker, the national organization's president & CEO.

Web Extra: For more queer political news, be sure to check http://www.ebar.com Monday mornings for Political Notes, the notebook's online companion. This week's column reported on San Francisco's push to have residents fill out their census forms.