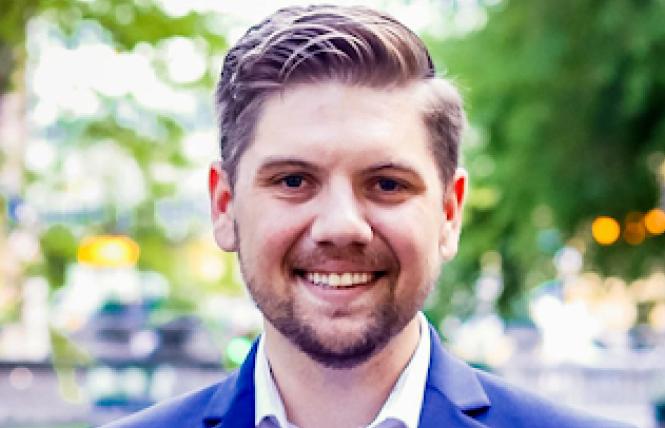 Tom Elliott is the new board chair of Campus Pride, a national nonprofit for student leaders and campus groups working to create a safer college environment for LGBTQ students. Photo: Courtesy Campus Pride

Tom Elliott, who was recently elected chair of the board of directors for Campus Pride, told the Bay Area Reporter that one of the challenges he and the organization face is connecting queer students now that many are away from their physical campuses.

"LGBTQ young people are already facing incredible difficulties. ... That sense of isolation was there before COVID and has been made worse," Elliott told the B.A.R., referring to the pandemic that has seen many educational institutions institute remote classes. "When college students go to a campus and have an LGBTQ organization and out staff members and some sense of community, they are more likely to thrive. Where physical spaces are gone, it adds another barrier to that community."

Campus Pride is based in Charlotte, North Carolina.

"When I was at SMU [Southern Methodist University] in Dallas, Texas, the semester after I came out one of my campus advisers recommended Campus Pride for me as a leadership opportunity," Elliott said. "I learned a lot in my experiences. There was an in-person, seven-day camp. It was one of the first times I could have a conversation with people who are gender-nonconforming and trans and do so in a safe space. At the time, SMU was rated the 14th most homophobic school in the country and I wanted to change that reputation."

After attending Camp Pride, Elliott pushed for the student body government at SMU to include an LGBTQ representative.

"It failed, but it inspired the generation after me to keep going and to keep pushing for change," Elliott said.

Elliott became involved in Campus Pride yet again when, after moving to Chicago, a friend told him that he was involved himself. Elliott has been on the board for one year and was elected chair September 15.

"I anticipate a lot of changes in the next few years," Elliott said, adding that Campus Pride is in the process of further digitization.

"That's the challenge going forward — how do we meet LGBTQ young people where they're at," Elliott said. "How do we connect them?"

Campus Pride is doing a number of things to facilitate this.

"That's what we've already done to a great extent, in addition to the leadership camp, we had our first-ever virtual lavender graduation and are in the process of planning a virtual Halloween party," Elliott said. "We've empowered young people to take over our social media."

But the limitations of the virtual world also prevent Campus Pride from knowing the whole impact of physical distancing on LGBTQ youth, according to Shane Windmeyer, executive director of Campus Pride.

"The impact to LGBTQ students is still being felt," Windmeyer said. "It's hard to get an exact picture of what LGBTQ youth are facing because so many are not on campus and are at home."

Elliott relayed a story about a young person who wanted to become more involved but who asked him to use coded language, fearing they'd be outed if their family overheard the conversation.

"That's their life for the foreseeable future," Elliott said. "A lot of the times it means people have to go back into the closet, and that causes all kinds of other emotional and mental health issues."

Windmeyer co-founded Campus Pride with two others in 2001.

"I couldn't imagine anyone better to be leading the organization than an alumnus from our first camp back in 2007," Windmeyer said of Elliott. "Tom has been a phenomenal board member and it's very exciting going into our 20th anniversary."

Elliott works for the Acacia Consulting Group, a Chicago-based public relations firm that he co-founded. Don Wilson, who has been on the Campus Pride board for one year and has volunteered at Camp Pride for four years, was elected vice chair.

Elliot's term is three years and his position does not have a salary. Campus Pride's budget is about $300,000, according to its 2018 IRS Form 990 posted on its website.