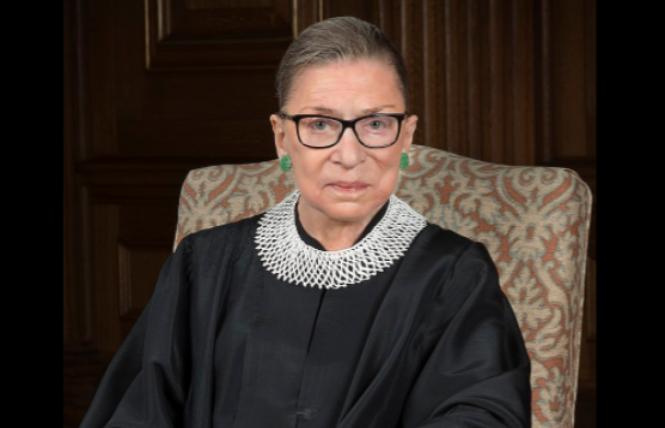 The cause of death was metastatic pancreatic cancer.

Ginsburg, who was appointed by President Bill Clinton in June 1993, authored some of the court's most significant cases, and often had biting dissents in those where she was in the minority.

She is remembered for a famous quip during oral arguments in the Defense of Marriage Act case in 2013.

In U.S. v. Windsor, the high court struck down a key provision of DOMA, finding it unconstitutional. The court ruled that the federal government cannot discriminate against married lesbian and gay couples for the purposes of determining federal benefits and protections.

"You are really diminishing what the state has said is marriage," Ginsburg said to DOMA attorney Paul Clement during oral arguments, interpreting a statement of his to diminishing the benefits of marriage.

LGBTQ leaders from across the country took to social media Friday night to offer their praise and condolences for Ginsburg.

Gay San Francisco Supervisor Rafael Mandelman wrote on his Facebook page, "The worst news. Thank you for holding on so long Justice Ginsburg."

Mandelman posted on Facebook that there would be a vigil at 7 p.m. Friday to honor her.

Colorado state Representative Brianna Titone, a trans woman, wrote on Twitter that, "My heart weeps with sadness. My soul hurts. We've lost an icon for #WomensRights and the world will have a void which will never be filled."

Lesbian Chicago Mayor Lori Lightfoot tweeted, "Devastated by the passing of RBG. She represented the finest among lawyers in our country. A giant in her advocacy for women's rights, civil rights and respect for the rule of law. We must honor her legacy and all her contributions to American jurisprudence. Rest in power, RBG."

Chasten Buttigieg, husband of former Democratic presidential candidate Pete Buttigieg, wrote on Twitter, "To think of everything she sacrificed for all of us until her dying day. A hero and an icon. Peter and I extend our condolences, prayers and sincerest gratitude to the family of Ruth Bader Ginsburg."

In a statement National LGBTQ Task Force Executive Director Rea Carey said the country had "lost a giant of justice, a champion for equality and progress. Justice Ginsburg was an American hero and pioneer, a voice for so many marginalized people, leaving behind a legacy of courage, tenacity and historic impact in creating a better country and a better world for all of us. We are all so grateful for all Justice Ginsburg has done for LGBTQ people, for women, for our ability to control our own bodies, for all that seek to move freedom forward in this country."

Bijan Mohseni, a gay lawyer from Orange County in Southern California, wrote on Twitter that he was heart broken about the news and urged people to vote this November.

"Justice Ruth Bader Ginsburg hoped to be remembered as 'someone who used whatever talent she had to do her work to the very best of her ability.' There is no doubt in my mind that a grateful nation will forever remember her that way," stated Rick Chavez Zbur, executive director of Equality California. "A trailblazer in every sense of the word, Justice Ginsburg knew no barrier too strong and no setback too great in her lifelong pursuit of equality. She waged her battle for justice as much through the pages of her fiery dissents as through the force of her majority opinions. As she often repeated, 'Real change, enduring change, happens one step at a time.'"

President Donald Trump told reporters he was "sad to hear that" after learning about Ginsburg's passing following a campaign rally in Minnesota.

His Democratic presidential opponent this fall, former vice president Joseph R. Biden Jr. who presided over Ginsburg's confirmation hearings as chair of the Senate Judiciary Committee when he was a Delaware senator, called her "a beloved figure."

"She practiced the right American ideals as a justice, equality and justice under the law. Ruth Bader Ginsburg stood for all of us," Biden told reporters after returning from his own campaign event in Minnesota.

Already court watchers are speculating that the Republican-held U.S. Senate will push to fill the vacancy on the court prior to the November election. Packing the nation's federal courts with conservative judges has been a singular priority for Senate Majority Leader Mitch McConnell (R-Kentucky).

In a statement Friday night McConnell asserted, "President Trump's nominee will receive a vote on the floor of the United States Senate."

Four years ago, however, McConnell refused to hold a hearing on former President Barack Obama's Supreme Court Nominee, Merrick Garland, following the death of Associate Justice Antonin Scalia. At that time, McConnell argued the American people should first elect a president before the Senate took up the court vacancy.

"In the last midterm election before Justice Scalia's death in 2016, Americans elected a Republican Senate majority because we pledged to check and balance the last days of a lame-duck president's second term. We kept our promise," stated McConnell. "Since the 1880s, no Senate has confirmed an opposite-party president's Supreme Court nominee in a presidential election year.

"By contrast, Americans reelected our majority in 2016 and expanded it in 2018 because we pledged to work with President Trump and support his agenda, particularly his outstanding appointments to the federal judiciary. Once again, we will keep our promise," he added.

Trump has already complied a list of 20 people he says he would consider appointing to the court. It includes several women, such as 4th U.S. Circuit Court of Appeals Judge Allison Jones Rushing U.S. District Court for the Eastern District of Missouri Judge Sarah Pitlyk. Deputy Assistant to the President and Deputy Counsel to the President Kate Todd, who was a law clerk to U.S. Supreme Court Associate Justice Clarence Thomas, is also on the list.

In addition to Republican Senators Ted Cruz of Texas and Tom Cotton of Arkansas, the list released September 9 includes 5th U.S. Circuit Court of Appeals Judges Kyle Duncan and James Ho, as well as 9th U.S. Circuit Court of Appeals Judge Lawrence Van Dyke, all of whom are "some of the most anti-LGBTQ activists sitting on the bench today," noted Lambda Legal Defense and Education Fund.

According to NPR Ginsburg dictated a statement to granddaughter Clara Spera prior to her death to definitively state, "My most fervent wish is that I will not be replaced until a new president is installed."

"As our nation mourns her passing and recognizes her extraordinary legacy, we must also honor her dying wish that no move be made to replace her on the Court until the next presidential term begins," stated Wu. "We owe her and our country that much, for her incredible contribution to moving us closer to the nation of equals we aspire to be."

Biden also weighed in on the timing of the confirmation hearings, saying it should be up to the winner of the November election to put forward a nominee.

Ginsburg lies in state at Capitol