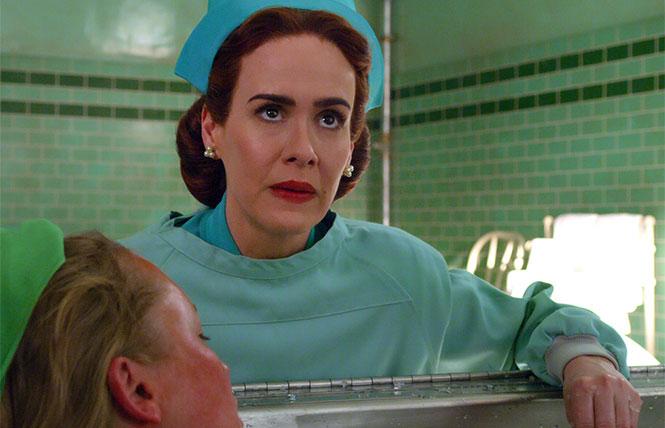 September used to be the most exciting month of the year for TV. Then came the pandemic, pushing a plethora of new series to 2021 as production tries to figure out how to do scripted TV with masks and social distancing.

Nevertheless, some new series debut this month. The combination of fire season and extreme heat is keeping many of us indoors, so TV is a reliable go-to: An endorphin rush for calming nerves jangled by a rogue president, climate crisis and the pandemic.

On September 18, Netflix drops the long-awaited Ryan Murphy series Ratched, featuring Sarah Paulson in the title role. As Paulson delivers the line, "Save one life, you're a hero. Save 100 lives, you're a nurse," we know it's time to strap on our seat belts.

Paulson is brilliant as the eponymous character in this period piece prequel to the Nurse Ratched of One Flew Over the Cuckoo's Nest, (the film adaptation of the Ken Kesey novel). She wears the 1940s styles with élan and her incisive, scalpel-sharp delivery is just mesmerizing. She's scary and impressive and lures you in only to slap you senseless with a one-liner no one could have seen coming.

The horror/suspense series tells the origin story of asylum nurse Mildred Ratched. The story begins in 1947 when Mildred arrives in Northern California for a position at a leading psychiatric hospital where new and unsettling experiments have begun on the human mind.

As Netflix explains: "On a clandestine mission, Mildred presents herself as the perfect image of what a dedicated nurse should be, but the wheels are always turning and as she begins to infiltrate the mental health care system and those within it, Mildred's stylish exterior belies a growing darkness that has long been smoldering within, revealing that true monsters are made, not born."

This is a wildly disturbing series with the kind of visceral gore Murphy employs in his American Horror Story series. It is not for the faint of heart and it may be triggering for some viewers. But it is among Murphy's best work. Co-stars include Cynthia Nixon, Judy Davis (there is a scene between her and Paulson over a peach that is breathtaking), Sharon Stone, Amanda Plummer, Vincent D'Onofrio, Finn Wittrock and others.

The sets are gorgeous, reminiscent of those in Bette and Joan. Another Murphy tour de force, Ratched has multiple Emmys written all over it and one is bound to go to Paulson in what is one of her best-ever and most chilling performances.

Cooked
For us, cooking shows are the ultimate guilty pleasure. Queer chefs abound and we can tell ourselves that one day, when we can invite a bunch of friends over for dinner again, we will be making some of these fabulous dishes.

Our fave new series is The Best Thing I Ever Ate. This is peak Cooking Channel/Food Network fare (also available on Hulu and YouTube).

Each episode of the series has the chefs (plus Martha Stewart) dish on fantastic desserts, barbecue joints and comfort foods. Each bite invokes a story of why this particular dish is a cherished treat. It's a really fun show, but make sure you have a snack handy, as it will make you peckish. The chefs make you feel at home—they are engaging and inviting and you know dinner with them would be fabulous. 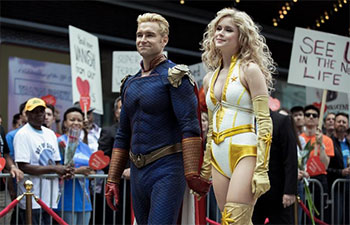 Our house(wives) and Boys
Speaking of fabulous get-togethers, why is it soothing to watch other people act out their problems on screen? Have we ever needed the Real Housewives franchise more? We have not. This week Real Housewives of New York City and Real Housewives of Beverly Hills are having reunions. You know you want to see Dorinda, Tinsley, Leah, Luann, Ramona, Sonja, Kyle, Dorit, Erika, Garcelle, Lisa and Brandi, right? Set that DVR to Bravo and watch the fur fly.

We are deep in the nihilism of this dystopian moment and the best series to address that is Amazon's The Boys. The episodes of Season 2 are debuting all month. The Boys is the adaptation of the comic book series that began during the Bush years—the last presidential disaster--by Garth Ennis and Darrick Robertson.

Satire is always a welcome reprieve in dark times and The Boys offers a ton of that—it is peak 2020. This satire of Superheroes is set in a universe where superheroes are real (don't we wish!) and evil gets bested.

The superheroes are owned by the powerful Vought International corporation, which markets and monetizes them. The series primarily focuses on two groups: the Seven, Vought International's premier superhero team, and the titular Boys, vigilantes looking to keep the corrupted heroes under control.

The Boys is slick and sleek and a little gory. It takes on evangelical Christianity, the military-industrial complex and the entertainment industry. There is ineffective leadership, cruelty, The Swamp and The Deep State. The Boys has hints of Mr. Robot and Humans. You do need to watch season 1 before embarking on season 2.

The Boys has a stunning cast that includes Karl Urban, Jack Quaid, Elizabeth Shue, Laz Alonso, Chace Crawford, Antony Starr, Erin Moriarty, Giancarlo Esposito and a host of others, with cameos by celebrities like Billy Zane and Tara Reid. Watch the trailer—you'll be hooked. 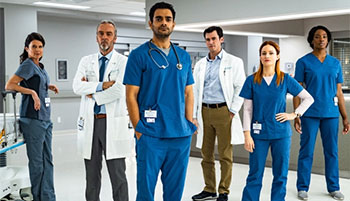 Emergency
Is this the time for a new medical drama? Maybe. Transplant debuted on NBC this week (Tuesdays) and is itself a transplant from Canadian TV earlier in 2020 where it was the number one hit series. What's different about this drama from other medical series is the lead is a Muslim immigrant. Oh yes.

But as a refugee, Bash has to do his medical training all over again to be the same doctor he already was in Syria. Drama ensues. An horrific truck crash nearly kills a senior doctor right in front of him. Bash saves the doctor's life, earning a residency in the biggest emergency department of the best hospital in Toronto.

But the life of a refugee is rough and his PTSD is ever-present. Bash is Other in this new country. Bash's cut-throat colleagues aren't interested in making things easier for him, either, and he still must pay the bills and raise Amira. Timely, painful and a cut above the standard hospital fare as it delves into immigrant angst.

On Sept. 29 the political debates begin, so Netflix and chill—and be sure to stay tuned.