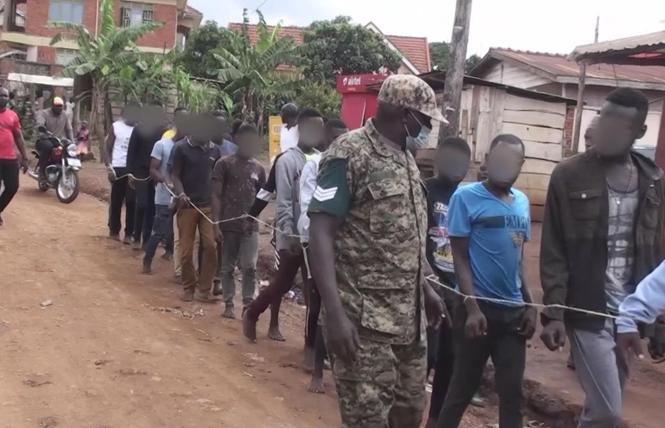 Ugandan Police and local officials bound the hands of young shelter residents and tied them together in a human chain in March. Photo: Courtesy Sky News

Two Ugandan officials summoned to Uganda's Chief Magistrates Court of Wakiso to face criminal charges for torturing and humiliating 20 LGBTQ youth did not appear in court.

Hajj Abdul Kiyimba, the chairman for Local Council III of Kyengera Town Council, and Philimon Woniala, a prisons officer, were summoned to the court August 21. They were scheduled to appear before a judge August 26.

76 Crimes reported that Chief Magistrate Nakadama Esther Lydia Mubiru, who is overseeing the case, also was not in court due to working on cases in Kigo Prison.

Lawyers from Human Rights Awareness and Prevention Forum, an LGBTQ-friendly legal advocacy organization representing the youths, were not able to obtain a new court date as of press time.

The absence of the chief magistrate and Kiyimba and Woniala sends a worrying signal. Activists had initially declared that the criminal summonses sent a strong message against torturing and humiliating LGBTQ people when they were issued.

"It sends a clear message that courts are willing to stand up for victims of torture, even where the police [are] reluctant to act," Adrian Jjuuko, executive director of Human Rights Awareness and Prevention Forum, told 76 Crimes at the time.

The 20 LGBTQ youths were reportedly tortured and humiliated in March and held in jail for 50 days.

Homosexuality is illegal in Uganda. Individuals charged with homosexuality face seven years to life in prison.

Officers charged the youths with disobeying Uganda's pandemic mandates to halt the spread of the novel coronavirus.

Reuters reported that during the arrest the youths were beaten by Kiyimba and bound in ropes, then marched barefoot to a nearby police station.

Witnesses and the youth described onlookers jeering at them and threatening them as they were taken to the police station.

Some of the people were later released due to health concerns. A majority of the youths spent the full time in prison.

Local police were unwilling to respond to HRAPF's reports of torture.

The organization was forced to institute private proceedings on behalf of the young people.

HRAPF filed criminal cases on behalf of seven of the COSF members, utilizing sections of the Prevention and Control of Torture Act, 2012. The act allows private individuals to institute criminal cases against officials accused of torture, reported 76 Crimes.

76 Crimes reported the organization's lawyers plan to apply to the court to issue arrest warrants for Kiyimba and Woniala following their failed appearance in court.

This action is on top of an ongoing investigation into Woniala's behavior, Uganda's attorney general informed HRAPF.

Kiyimba and Woniala are scheduled to appear at a hearing for a separate civil case September 23.

LGBTQ activists around the world decried the arrests, accusing Ugandan officials of taking advantage of the global coronavirus pandemic by targeting LGBTQ groups and queer people.

The 20 LGBTQ youths won a civil suit filed on their behalf by HRAPF against the attorney general and commissioner general of prisons for denying them access to lawyers and medical care, among other reasons, last month. The court awarded each youth five million Ugandan shillings ($1,365) for damages.

"[The case] has the potential to serve as a really important example of the implementation of Uganda's underused anti-torture law and to be [a] deterrent to abuses against LGBT people and the population as a whole by security forces," Nyeko told Reuters.

Cremona, who is also known as the "nun of the trans," is a longtime friend of the pope and has worked with the transgender community in Neuquén, Argentina for 14 years.

Neuquén is the most populous city in the Diocese of Patagonia.

In his reply to her letter informing him of her project, Francis wrote that he was praying for her and the transgender women she was helping and that God "will repay you abundantly."

"He never opposed what I do, and for me it is a great support," Cremona, who is a superior of her community in Neuquén, told Telam.

Cremona, 53, has worked with Neuquén's transgender community helping them get out of addiction and prostitution and gain trade skills.

She was inspired to build the home when a transgender sex worker told her in 2015 that her dream was to "have a clean bed to die in," she recalled in an interview.

"She didn't know whether she would die or end up in a hospital bed where the sheets are not even changed," Cremona said.

Born in Buenos Aires in 1967, Cremona received her habit when she was 20 years old. She immediately set out on her mission working with young people struggling with substance abuse. She has also ministered to prisoners around the city.

She has been a friend of Francis even before he served as archbishop of Buenos Aires, Argentina's capital city.

He has continued to support her work with the transgender community and her housing project advising her and praying for her when she received push back from the local community.

"Sometimes I ask him what to do when someone tells me something terrible, and he always says to me: 'Did Jesus have an easier or harder time? At the time of Jesus, the lepers were rejected in the same way,' he called transgender people the 'lepers of today,'" she told America magazine.

A home to call their own
Cremona handed the keys to the new home to four transgender women and their partners during an August 10 inauguration ceremony for the new apartment complex, The Coast of Limay.

"My dream was that trans people could have a decent home. Because we don't give them that opportunity. They don't have a right to anything," Cremona, who was joined by Neuquén Governor Omar Gutiérrez and the city's mayor, Mariano Gaido, at the ceremony, told reporters.

The complex, which has 12 studio apartments with a shared bathroom and kitchen, was a nearly three-year and $380,000 project to complete in Neuquén's Confluencia neighborhood.

The Provincial Institute of Housing and Urban Development built the complex on land donated to the monastery by the district and funded by the local provincial government. The apartments will be administered by the Order of Discalced Carmelites.

It will now be home to impoverished Argentinian transgender women between ages 40 and 70.

"I am so happy, so grateful to God and to Sister Monica who has been so kind to us," Paola, a new resident of the apartment building who only went by one name, told reporters during the ceremony, reported Global Sisters Report. "We should erect a monument to this nun who was so attacked and yet with the strength of God continues to aid us!"

Despite passing the Gender Law that granted self-determination and protected transgender Argentinians in 2012, discrimination and violence against the trans community remains prevalent.

At the end of 2019, the Neuquén province provided pensions to transgender individuals over 40 years old in reparations for decades of inequality and violations to their rights, reported Global Sisters Report.

The new tenants are moving in without a deposit or paying rent and were given a food basket and a non-contributory pension, allowing some to get by during the COVID-19 pandemic without having to work.

Some of the tenants are making food products to get them through the pandemic until they can return to their jobs in the beauty industry, eldercare, and other professions.

The transgender women and their partners will have to follow rules in order to reside in the complex.

This isn't the first time the pope has supported transgender individuals during the pandemic. In April, he assisted a group of transgender sex workers in Rome to help them through Italy's quarantine. The pope has also met with a Spanish transgender man and his girlfriend at the Vatican, reported the Global Sisters Report.

Bermuda was the first country in the world to legalize and then rescind marriage equality in 2017. Its marriage equality case has been entangled in a legal battle between Bermuda's Supreme Court and government for the last three years.

The government made a final appeal to the council in London last year.

In the meantime, LGBTQ Bermudians and visitors have been tying the knot because same-sex marriages have been allowed to continue parallel to the legal battle, Rod Attride-Stirling of OutBermuda, told the Royal Gazette.

Attride-Stirling, who is legally representing four couples in the case, is "cautiously optimistic" about the council's forthcoming ruling.

"The change in Bermudian society is already complete," he said.

The council also received the Cayman Islands' same-sex marriage case to review, but hasn't set a date for that case.

This summer, a battle over the conservative islands' domestic partnership bill has been raging between conservative members of the islands' parliament and Martyn Roper, the British governor to the Cayman Islands, following the bill's narrow failure in parliament in July.

API orgs call upon WHO to include SOGI in response to COVID-19
LGBTQ Asian Pacific organizations are calling upon the World Health Organization to include sexual orientation and gender identity aspects into its policies and programs responding to the COVID-19 pandemic.

About 20 organizations have signed onto the open letter to WHO's Director-General Dr. Tedros Adhanom Ghebreyesus.

The letter raises issues of discrimination and stigma from anti-LGBTQ laws, lack of employment, mental health issues from prolonged isolation and being required to remain at home with unaccepting family members, and more that increase the potential risk for LGBTQ people during COVID-19.