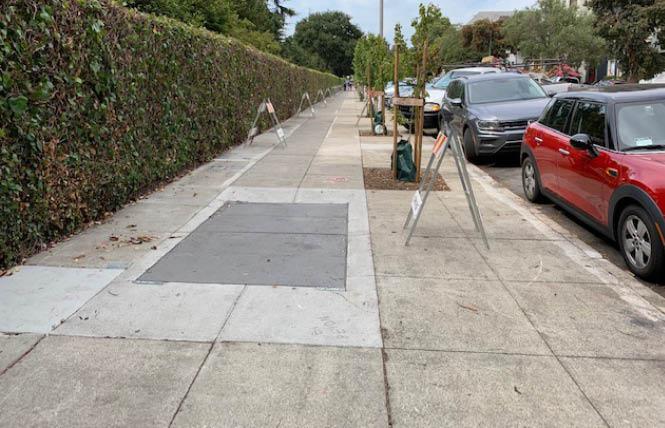 A week after the city started its tent encampment resolution work on August 11, Noe Street between 14th Street and Duboce Avenue remains clear of tents, bikes, stoves, and trash.

The 13-hour job began at 7 a.m., when a handful of city workers began informing the 14 people living there that they would have to move. By the end of the day, 10 of the people agreed to move to housing elsewhere and four declined services, according to Jeff Kositsky, manager of the Healthy Streets Operations Center. The information was in an email written by Kositsky and obtained by the Bay Area Reporter. Emails directly to Kositsky for comments were not answered at press time.

The Kositsky email said that three people went to a shelter, two to safe sleeping sites, four to hotel rooms, and one to a hospital. Several members of the Coalition of the Homelessness, an administrator from the adjacent California Pacific Medical Center, and officers of the San Francisco Police Department's Park Station were also present, according to the memo.

The Noe operation was part of a city plan to find alternative housing and services for all the encampments in the city, scheduled based on the size of the camp and other factors, Kositsky told members of the Duboce Triangle Neighborhood Association at a video meeting earlier this month. The encampments on 16th Street, between Dolores and Market streets, are scheduled for removal next month.

"I was happy to see the Noe encampment disbanded. It had grown quite large and had taken over the entire sidewalk adjacent to the hospital, and it posed a health and safety hazard to both its residents and its neighbors," said David Troup, a gay man and immediate past chairman of DTNA's land use committee. "Allowing people to camp on sidewalks is not good public policy."

But the neighborhood problems are far from over, according to Troup.

"The encampment in front of the old Pottery Barn [at Castro and Market streets] is shaping up to be even worse, I've never seen so much trash and junk in all my life," Troup wrote in an email to the B.A.R.

One observer who was on site last week told the B.A.R. that some of the workers from the public works department and the SFPD were "extremely rude."

Larry D. Ackerman, a volunteer with the Coalition on Homelessness, spent 12 hours at the site, offering support to the people who were asked to move. In a telephone interview with the B.A.R., Ackerman, a gay man who has lived in the neighborhood for 29 years, said that the worst situation happened after a public works employee tried to seize a tent that was going to be left behind by someone going to a hotel.

Another camper asked if he could have it, but public works refused, Ackerman said. He said that his co-worker, Christin Evans, interceded and made sure the owner of the tent wanted the other person to have it, hoping the information would cause public works to back down. Instead, the worker slashed the tent with a box cutter, apparently hoping to end the dispute that way, Ackerman said.

"It turned out to be a macho power trip" by several workers, he said. Ackerman "went up the ladder" of officials at the scene until one of the supervisors gave in and agreed to let the man have the tent. The man told Ackerman "he could sew it up."

With two other coalition volunteers on the scene, Ackerman said their main goal was to "de-escalate" confrontations between city workers and campers and make sure the operation went smoothly.

Ackerman said that he had a nasty encounter with a police officer, who told him to "get out of her way," claiming he was blocking the operation. Two other police officers were "clearly out of their element," he said, talking to campers although they had strict orders not to do so.

Ackerman, a retired medical researcher with UCSF, has been involved with the Coalition on Homelessness for several years.

"We investigated the incident and took appropriate action with the employee," she wrote in an email. "In addition, we reminded all of our street cleaning staff to review our de-escalation guidelines."

Officials from SFPD did not return a message seeking comment.

DTNA board president Kimyn Braithwaite and gay District 8 Supervisor Rafael Mandelman did not respond to requests for comment.

Updated, 8/19/20: This article was updated with a statement from SF Public Works.