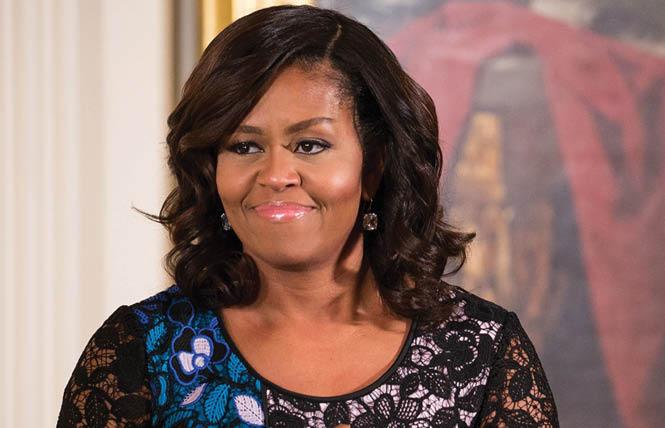 There will be a lot of history made at this week's Democratic National Convention. Some will be highly visible — like primetime closing night speeches by two high-profile LGBTQ leaders. Some will be totally behind the scenes — like the role of a gay man as the convention's chief executive for operations.

The most visible difference this year will be that most delegates and press will not converge on the convention host city — Milwaukee, Wisconsin. Due to the coronavirus pandemic, Milwaukee will serve as the "anchor" for activities, which begin Monday night, but the bulk of the convention will take place through broadcasts and livestreaming from locations around the country.

The Thursday night slots are most coveted because that's when the convention hears the acceptance speech of Democratic presidential nominee Joe Biden. He will be speaking from his home in Delaware.

Evening programming can be watched on just about any media platform — network television, Twitter, Roku, Facebook, and more. Each night begins at 5 p.m. (Pacific Time), with entertainment, followed by speeches beginning at 6.

Tuesday, August 18: At noon, the party's official LGBTQ Caucus will meet. To participate, viewers need to RSVP on the DNC website.

Thursday, August 20: The LGBTQ Caucus will meet again at 9 a.m. The last evening of the convention will include Baldwin and Buttigieg. And, of course, will conclude with Biden's acceptance speech.

LGBTQ people have played noticeable roles in Democratic National Conventions since 1980, when an unofficial LGBT Caucus nominated D.C. activist Mel Boozer to be vice president. Boozer, a prominent African American and gay activist in Washington, D.C., gave the first-ever speech by an openly LGBTQ person to the 1980 convention. Since then, the LGBTQ Caucus has become an official entity of the national convention, and many openly LGBTQ people have spoken before the gathering, some in prime time.

At the 2016 Democratic National Convention, lesbian Sheriff Lupe Valdez of the Dallas County Police spoke just a couple of hours before the presidential nominee did on the Thursday night of the convention. Valdez urged communities to do what they can to restore good relations between police and minorities. Other out speakers that year included Chad Griffin, then-president of the Human Rights Campaign, and Congressman Sean Patrick Maloney, co-chair of the Congressional LGBTQ caucus.

About 12% of the delegates attending the 2016 convention in Philadelphia identified as LGBTQ. That was up from 8% in 2012. Numbers are not yet available for 2020.

This year, former HRC President Joe Solmonese is the convention's CEO. Solmonese said the party has focused on "new and innovative ways to engage more Americans than ever before" through this convention.

The Republican National Convention will take place August 24-27 in Charlotte, North Carolina, with in-person attendance by a representative group of 336 delegates to cast votes on the first day. President Donald Trump is expected to deliver his acceptance speech on August 27 from a remote location.