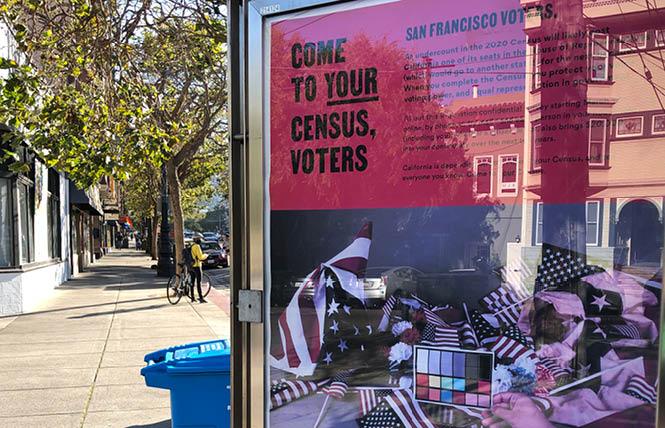 A public service announcement displayed at Market and Sanchez streets in the Castro urges people to fill out the 2020 census. Photo: Matthew S. Bajko

Among major West Coast cities, only Los Angeles has a worse response rate on the 2020 census than San Francisco. Both urban centers are behind the national and statewide response rates for the decennial count of the country's population.

And due to a change made by census officials, there is little more than a month and a half left for people to fill out their census forms. Initially pushed back to October 31 due to the novel coronavirus outbreak having upended plans for the census count, the deadline for households to fill out their forms is now September 30.

"We are taking steps and adapting our operations to make sure everyone is counted, while keeping everyone safe," stated U.S. Census Bureau Director Steven Dillingham, Ph.D., August 14, in releasing the latest update on the count. "Our commitment to a complete and accurate 2020 census is absolute. In this challenging environment, we are deploying these tactics to make sure we reach every household in every community."

Continuing a trend the Bay Area Reporter has tracked all year long, San Francisco remains a laggard in terms of census response rates when compared not only to major metropolitan areas in California, Oregon, and Washington states but also other densely populated counties in the Golden State. For instance, the city of San Diego is at 69.9%, San Jose is at 72%, Portland is at 70.8%, and Seattle is at 73.8%.

Census bureau will follow up
The census bureau will be following up with some nonresponding households by phone, both by cellphone and landline, in order to encourage them to turn in their census forms.

Ensuring there is a full and accurate census count is of particular interest not only to political leaders but also social service providers, as the final results determine how U.S. House seats are apportioned to the states and how more than $675 billion in federal funding is annually distributed to the states for myriad services from food and housing to health care and other social support.

San Francisco officials estimate the city will lose $2,000 per year over the next decade for every household that fails to respond to the census.

According to San Francisco officials, the city has high concentrations of young children (5%) and people of color, including African Americans (5.5%), Latinos (15.2%), and Native Americans (0.7%), who are hard to count. Approximately 13.1% of San Francisco County residents are noncitizens; they may be afraid to turn in their census form due to President Donald Trump's attacks on immigrants.

"The 2020 census is still happening — and San Francisco needs you to answer and #FightTheUnderCount!" noted the city's Office of Civic Engagement and Immigrant Affairs on its Facebook page August 12. "Too often, BIPOC communities are underrepresented in our country's census data, therefore not getting the representation they need and deserve. Doing the census allows our voice to be heard and tells the government that we are here and that we matter."

After losing a fight to include a citizenship question on the 2020 census, Trump recently claimed in a memo that noncitizens would not count toward determining a state's allotment of House seats. His edict is being challenged as unconstitutional in court, including by San Jose Mayor Sam Liccardo who is one of the named plaintiffs in a lawsuit filed by the City of San Jose, the Black Alliance for Just Immigration, King County of Washington state, and Arlington County of Virginia.

"The explicit promise of the 14th Amendment that apportionment rely upon the 'counting of the whole number of persons in each state' does not countenance or allow the disregard of any one 'person,' as the White House seeks," stated Liccardo. "It is astounding that 132 years after we wiped the abhorrent 'three-fifths' clause from Article I of our U.S. Constitution, and as our nation yearns for racial equity, we have a presidential administration seeking to return to the days prior to the passage of the 14th Amendment."

The San Mateo County Pride Center called Trump's move "purely political" in a recent email as part of its efforts to encourage LGBTQ residents on the Peninsula and around the Bay Area to take part in the 2020 census.

"Trump wants to suppress census participation and skew the congressional map," noted the LGBTQ community center. "This memo is another attempt to attack immigrants and marginalized people. He tried it before with the citizenship question, but he failed."

Census takers will be visiting nonresponding households in person, following federal and local health guidelines when they do, such as wearing a mask and remaining socially distant. If no one is home, the census taker will leave a "Notice of Visit" with information about how to respond online, by phone or by mail.

The census bureau will also mail an additional paper questionnaire to nonresponding households and, for those in census block groups with a response rate lower than 50%, will send them an email encouraging them to fill it out. It also is sending a seventh mailing, including a paper questionnaire, in late August to early September to the lowest-responding census tracts.

Whether they are a U.S. citizen or an undocumented immigrant, people can complete their census questionnaire online this year for the first time at www.my2020census.gov, by calling 844-330-2020, or by mailing in the form sent to them.

"If you haven't responded, the time to respond is now! Responding to the 2020 census online, on paper, by phone, or in person with a census taker, helps secure vital resources for your community," noted Dillingham.