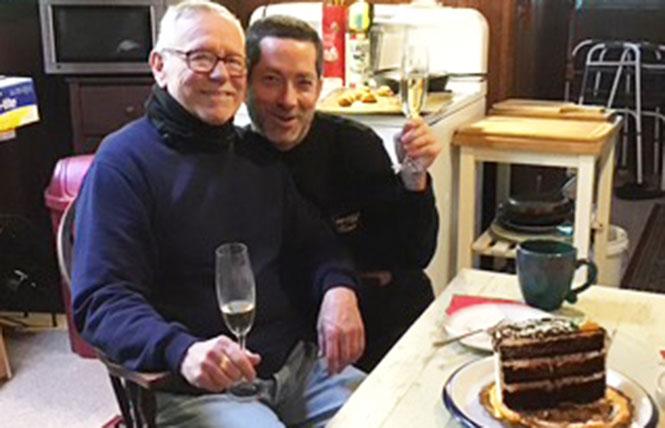 John Orcutt, left, and his partner, Jay Wescott, allege that a neighbor has harassed them for years. Photo: Courtesy Jay Wescott

A Sonoma County gay couple allege that a man in their neighborhood has waged a campaign of homophobic harassment against them, and has continued even after they received temporary restraining orders against him.

John Orcutt, 72, and his partner, Jay Wescott, 53, moved into a two-bedroom cabin in Rio Nido — a town of 522 people adjacent to Guerneville, the LGBTQ vacation destination — in 2012.

The couple had lived in San Francisco, meeting in 1994 at the South of Market leather bar The Eagle.

Wescott is a veteran of the United States Air Force and Orcutt has a disability.

"We were evicted from our apartment in San Francisco because of a loophole in the Ellis Act," Orcutt said in a recent interview with the B.A.R. "We couldn't find another apartment we could afford. The only place we could afford was up here in Rio Nido."

Since they moved, the couple alleges that Russel Vincent Olson, who rents other properties in the area, has been harassing them. Olson is not their landlord.

"Russel said 'why don't you ladies go back to San Francisco where you belong?' just a few months after we moved here," Orcutt said. "After that, it was continual harassment."

Wescott said that on another occasion, "Olson got into a truck, slowed down in front of the house, and yelled 'fucking faggots.'"

The couple's friend, Sharon Ray, was at their residence on one of several occasions when Olson allegedly yelled the slur.

"I was over at their house," she said in an interview with the B.A.R. "He came by in his big truck and was revving the engine, revving the engine, and I went up to see what was going on and he just yelled 'fucking faggots' and drove off after revving and I thought 'are you fucking kidding me right now?'"

"It came from absolutely nowhere," she added. "That's the one that really stuck out in my mind. On other occasions [Orcutt and Wescott] told me they're terrified to even walk around the neighborhood because other people give them a hard time. I feel so, so bad for them."

The issues are not limited to Olson. Over the Memorial Day weekend, Wescott said, Olson was joined by seven others in harassing them.

"I went out and we found our recyclable can full of stuff — I guess from next door — and then one of our neighbors came across the street screaming, and her husband was screaming," Wescott said in a subsequent interview with the B.A.R.

They were then joined by several others, including Olson, Wescott said, who yelled "faggot" and "cocksucker" at them.

"They were recording us on their cellphones and they said we're going to get fucked in jail. They were blowing kisses at us," Wescott said. "The [sheriff's deputies] were called by them. ... That's what we have to put up with here. They use reverse psychology on people."

"These people are dangerous," Orcutt said. "We can't even go for a walk."

Authorities called
The couple has reached out to the Sonoma County Sheriff's Office.

"They'll take a report but have not been helpful at all," Orcutt said. "They say things like 'he's a family man.' They don't understand that gay people get married and have children."

Ray said that the couple "called the [sheriff's office] several times and they just blew it off."

The Sonoma County Sheriff's Office issued a statement to the B.A.R. in response to a request for comment.

"There are ongoing issues between neighbors involving Mr. Orcutt and Mr. Wescott. Deputies respond to every call for assistance and treat everyone fairly and with respect," the statement reads. "When there is behavior that feels harassing but is legal, we recommend the person being harassed apply for a restraining order."

Regarding the concern that a deputy made excuses for Olson, the office said that "we treat everyone fairly."

"If Mr. Orcutt or Mr. Wescott believe[s] the deputy acted inappropriately, they should file a complaint with the sheriff's office for investigation," another statement reads.

Orcutt identified the deputy who he claimed called Olson a "family man" in a phone call with the B.A.R. August 6. The sheriff's office responded to a B.A.R. inquiry that Orcutt should file a complaint with its office.

Things got so bad that in 2019 Orcutt sought a restraining order. At least two temporary orders were granted, according to court documents Orcutt sent to the B.A.R.

However, according to Orcutt, the couple stopped seeking a permanent restraining order when government officials could not locate Olson to serve the temporary orders. During this time the couple stated that they did not see Olson around.

"After three months we thought 'we can't just keep coming back to court to get this extended," Orcutt said.

In a written statement made last year while applying for the restraining order, Orcutt wrote that Olson ('Respondent') trespassed their property several times, blocked their driveway with his truck, and urinated in front of their home.

"On March 13, 2019 Respondent was observed with his shorts below his waste [sic] preparing to urinate on our tomatoes growing in our garden," the statement reads. "I was forced to call the police due to this vulgar and harassing action."

The couple sought the assistance of Sonoma County Supervisor Lynda Hopkins, who represents the area. According to Wescott, Hopkins did not answer the phone, but staff members did and told the couple to call the Human Rights Campaign and GLAAD. When the couple called those national LGBTQ organizations, there was no reply.

"A meeting was called in Guerneville at a town hall," Wescott wrote in an August 4 email to the B.A.R. "[Hopkins] and about two officers spoke on homeless issues and other items on the agenda. When a friend of ours spoke up about harassment of us, we declined to comment at the meeting because we were in the process of trying to find a lawyer and people in the audience would have repeated back to their friends about us. So we didn't say anything to Mrs. Hopkins and just left."

The B.A.R. asked Hopkins for comment, and she stated in an August 4 email that she did not recall speaking with the couple but that she has "zero tolerance for homophobia." She asked for further details.

"Homophobic harassment is a very serious charge indeed. I am a strong supporter of LGBTQI+ rights and will do anything I can to ensure our LGBTQI residents are treated with equality and respect in our communities. Despite local opposition, I worked with the LGBTQI community to fly the Pride flag year-round on a county-owned flag pole in downtown Guerneville.

"We struggled for a time with the subsequent removal of the flag, which was ultimately prosecuted as a hate crime by our district attorney. I share this story because it's worth noting that while we continue to fight to create hate-free, safe communities for our LGBTQI residents, we do still struggle with hate crimes. I am open to any feedback from any residents on how to address this further."

Hopkins was referring to the case of Vincent Joseph O'Sullivan, who in 2018 was convicted of stealing a rainbow flag from the Guerneville Plaza flagpole. As the B.A.R. reported at the time, O'Sullivan was also convicted of a felony hate crime last year for threatening to kill LGBTQs in 2018.

The B.A.R. recalled the reported phone call and the town hall to Hopkins, who stated in a follow-up email that she did not remember either, specifically.

"I mean this with all respect, but that's not much detail, so I'm not sure how to learn more about or provide substantive comments on the specific situation," Hopkins wrote. "We receive hundreds of calls each month and we do our absolute best to assist constituents. We have also hosted many town halls on the topic of homelessness, and so I'm not sure what town hall you're referring to. If the constituents still need help, I can be reached at this email and am happy to attempt to assist them again."

A man who identified himself as Russel Olson answered a telephone number associated with him when the B.A.R. called it July 29. When asked for his comment on the allegations against him, Olson asked the reporter if "that's for real?" and then said, "This has to be a joke."

"You called the wrong person. I have no idea what you're talking about," he added, before hanging up.

Ray said she was surprised at the "level of homophobia" considering how close they are to Guerneville.

"I don't think anyone should be treated as less," she said. "I'm really surprised at the level of homophobia. Guerneville is a real rainbow area and that Rio Nido is just a couple of minutes away is shocking."

As for Orcutt and Wescott, they said they couldn't really leave the area.

"We can't afford to leave because our rent is so low," Orcutt said. "We are on limited income and we are kind of stuck here."