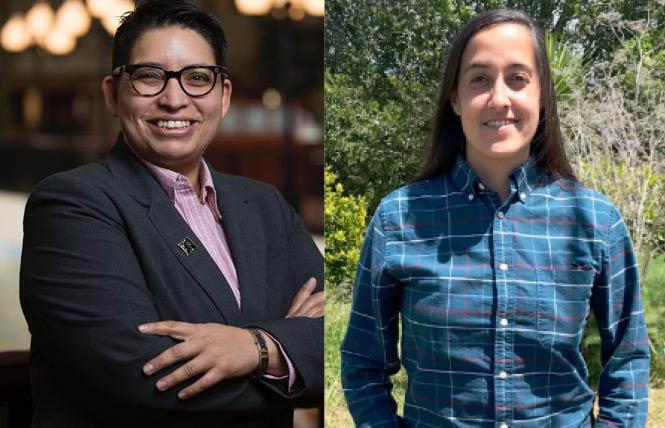 Maria Cadenas, a lesbian single mom, is aiming to become the first Latina to serve on the council. She fell short in her bid earlier this year for a Central Coast state Senate seat and will officially launch her city council candidacy Monday, July 20, with a livestreamed event at noon on her Facebook page.

Cadenas is the executive director of Santa Cruz Community Ventures, which focuses on income inequality among women and people of color. And one of the nonprofit's board members, Kayla Kumar, a queer woman of color, is also seeking to be elected to the City Council this fall.

Kumar is the development director of the nonprofit Food, What?! that works with marginalized youth of color throughout Santa Cruz County. She launched her bid Thursday, July 16, with the unveiling of her campaign website and Facebook page, where she also posted a video about why she decided to enter the race.

"We're at a turning point. There is a powerful call from our community for transformation. I hear a community that wants the dignity of us all reflected in the new normal," wrote Kumar, 31, who is Indian American and has a twin sister, about why she is running. "I'm more than ready to deepen my work towards this vision by running for office. I'd be honored to rise to this moment alongside you."

In a July 17 email to supporters announcing her decision to seek a council seat, Cadenas wrote that while her potentially being the city's first Latina councilwoman "is noteworthy on its own," it is just one aspect of her campaign.

"This November 3rd, our vote is a representation of our commitment to live up to our ideals as a people, a country, and a city. To take this opportunity to build a future where race, gender, immigration status, sexual orientation, and class do not determine our ability to thrive," wrote Cadenas. "It is upon us to re-imagine and question everything we think we know. From how we direct our economic recovery to expanding our understanding of housing as part of our healthcare and response to climate change. I believe in our ability to rise up to this moment."

In her first bid for public office, Cadenas had sought to succeed state Senator Bill Monning (D-Carmel), who is termed out of his 17th Senate District seat along the Central Coast this year. But she faced an uphill climb against fellow Democrat John Laird, a gay former member of the state Assembly who is favored to win the Senate seat.

Laird was the first out person elected to the Santa Cruz City Council in the 1980s and also served as its first gay mayor. He easily took first place in the March primary for the Senate seat and is expected to defeat his Republican opponent, Vicki Nohrden, come November.

Cadenas landed in third place in the primary contest, and despite failing to advance to the general election, she was able to boost her name recognition with voters. It gives her an edge heading into the City Council race.

There is one open council seat as City Councilwoman Cynthia Mathews is termed out of office this year. Councilwoman Martine Watkins has launched her bid for a second four-year term, while Councilwomen Sandy Brown and Katherine Beiers, a former Santa Cruz mayor elected in March during a recall election that saw two councilmen ousted, are also up for election to full terms in November.

Women currently hold all six of Santa Cruz's City Council seats, which are elected citywide. The lone male member of the council is Mayor Justin Cummings, who isn't up for reelection until 2022.

Cadenas was born in Mexico City and grew up in Southern California. After graduating Beloit College in Wisconsin, she went to work for Accenture and shortly after the 9/11 terrorist attack was hired as the associate director of the American Civil Liberties Union of Wisconsin.

She later was named executive director of the Cream City Foundation in Milwaukee where she worked on a number of LGBTQ initiatives and issues. Hired by berry distributer Driscoll's as its senior community involvement manager, the job brought her back to California in 2011.

She settled in Santa Cruz, where she continues to live with her daughter. Cadenas is separated from her daughter's other mother and the former partners now share custody. In 2015, she started working at Community Ventures.

Kumar and her twin sister were born in Fremont and later moved to Boise, Idaho with their older siblings and mother. Their parents had separated and their father returned to India. The siblings ended up being placed with other families, leading Kumar to act out in school and be expelled, according to her campaign website.

She credits being placed with a new family that helped her turn her life around and reenroll in her school. After graduating with a philosophy degree from Saint Joseph's University in Philadelphia in 2011, Kumar returned to Boise then relocated to New Orleans.

By 2015 she was living in Santa Cruz and working for Barrios Unidos as the nonprofit's development director. She started in the same position with her current nonprofit in January 2018. Last year, Kumar was appointed to the Santa Cruz County Juvenile Justice Delinquency Prevention Commission.

Candidates have until August 7 to enter the race; it will be extended five days if either Brown or Beiers opt not to seek reelection. As of Friday they had yet to pull papers, while three other people had done so, according to the city clerk's office.