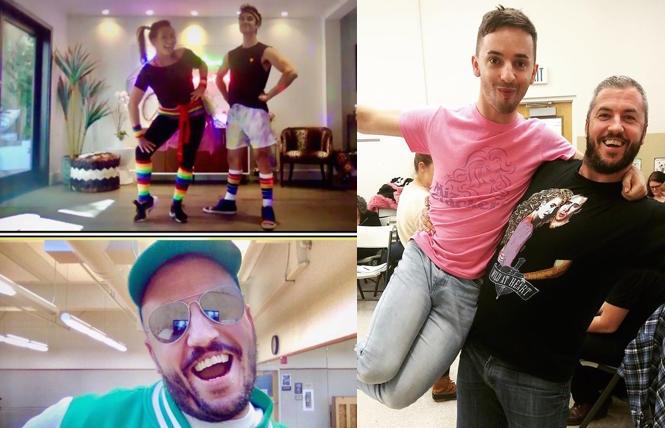 Mia Swier and Darren Criss (upper left) in a June 2020 Roryography class; (right) Miz Cracker with Davis in a Dec. 2019 rehearsal for 'Femlins'

If you've seen any of Peaches Christ's theatrical extravaganzas, or managed to get tickets to the always sold-out Baloney burlesque shows at Oasis, you already know the fun, witty and sometimes sexy choreography of Rory Davis.

But with nightclubs and theaters closed, we're missing out, unless you dare to sweat to the oldies in Roryography classes, which have been enjoyed recently by a few celebrities, namely Darren Criss and his wife Mia Swier, and John Stamos and his wife Caitlin McHugh.

In an interview with the Bay Area Reporter, Davis discussed his dance class's origins.

"Roryography was originally supposed to be a small dance party for a few friends in January 2017. I was always so inspired by the Jane Fonda/Richard Simmons aerobics tapes of the 1980s and wanted to throw an event in that style for anyone who was interested. 75 people showed up at the first class and the party has never stopped. "

Sweating in person being off-limits, Davis, who created Baloney with his husband and creative partner Michael Phillis (Patty from HR), adapted. Their shows and classes are all now online.

"Like so many other artists, the arrival of Covid-19 in March forced me to get creative. The follow-in-the-moment nature of the class translates perfectly online, just like those '80s exercise aerobics tapes. Now that I'm also hosting the class on Airbnb, it's allowed me to dance and interact with people from all over the world, including a Trump defector in Peru and a bored housewife in Connecticut who wants to begin a drag career. I check in on both of them weekly now."

Participants with technique and experience of any level are welcome. Dressing in retro gear is encouraged.

"I always explain at the beginning of every class that no one takes themselves seriously in Roryography," said Davis. "My specialty is people with two left feet. Roryography is meant to be a sweaty good time for all, and it doesn't matter what your skill level/age/limitations are, let's just have some fun. If you have studied dance before, you will still sweat and smile."

Classes have ranged from intimate one-on-ones to, in the pre-COVID days, multitudes.

"I would say because of the Roryography parties that have been held in the International Terminal of SFO the number must have reached a few thousand. I've gotten hundreds of people to dance to 'Funkytown' with me at their airline gates and it is something to see."

Davis recalled his choreographic debut in the Bay Area.

"Local drag legend Miss Rahni asked me to help her recreate the iconic 'If' music video by Janet Jackson for the Trannyshack Star Search 2009 pageant. We came in first place, and I have never looked back."

Queried to count the number of dances he's choreographed, Davis said, "I recently tried to count the full list of Peaches Christ, Baloney, and drag numbers I've choreographed since I arrived in San Francisco in 2008 and it has to be reaching around one thousand. Once I think the list is complete I will come across an old costume or see a photo surface on social media and think 'When did that happen?'"