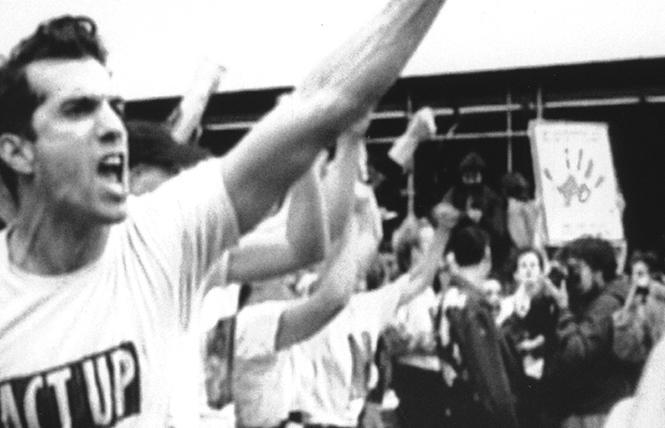 'Voices From the Front' part of Frameline44's AIDS 2020 program

Although its hit mini-festival is over, Frameline continues to screen ticketed and free films online, including a series of narrative documentary and short films about AIDS.

Films in the FL44 Pride Showcase program include:

Chrissy - by Jacqui North: The most watched documentary on Australian television, where it first aired on World AIDS Day in 1999, Chrissy is an honest and daring film taking us inside the life of an ex-runaway and street kid.

Dead Boys Club - by Mark Christopher: The story of a young man in a world haunted by the absence of an entire generation of men that have gone before him includes some nostalgic flashbacks.

Thanks to Hank - by Bob Ostertag: The inspirational story of a true unsung hero of the gay liberation movement and the AIDS epidemic that followed, Hank Wilson, is an acclaimed documentary with a San Francisco setting.

This is Not An AIDS Advertisement - by Isaac Julien: The director of Looking for Langston and Young Soul Rebels made an impressionistic antidote to the passionless, guilt-ridden AIDS awareness campaign conducted in Great Britain in 1987.

Voices From the Front - by Testing the Limits Collective: Using both personal and historic footage of the pivotal days of ACT UP/NY, the documentary shows the rage and organization of protests in Washington, when thousands of activists held the Food and Drug Administration under siege in 1988, demanding speedier drug approval, and two years later at the protests at the National Institutes of Health.

We Are Dad - by Michel Horvat: The lives of one family: two white gay pediatric nurses and their five foster children, show a family with an abundance of both love and complications.

The films are free online through July 10.

Here's a direct link to the AIDS-themed program.