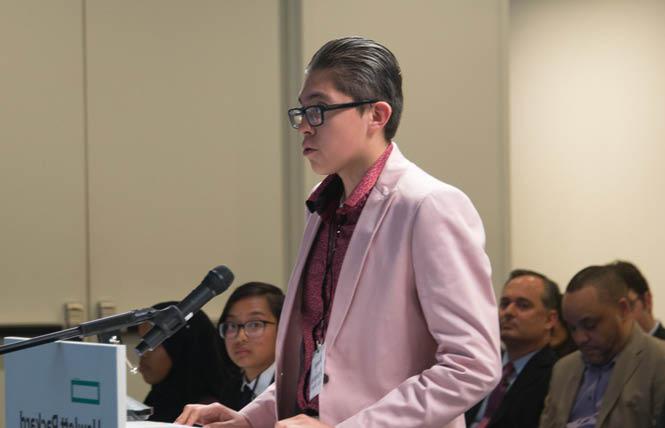 A Bay Area moot court competition of high school students this week will highlight a gay rights case out of Arizona.

The students, who are part of the Silicon Valley Urban Debate League, will be arguing before a panel of three judges July 1.

Title I high school students in SVUDL argue real cases in front of judges to learn more about civics, the law, debate, and public speaking. The case they will be arguing Wednesday is Brush & Nib Studio, LC v. Phoenix, which is a case about anti-LGBT discrimination.

In the case, the owners of a company that makes custom wedding invitations did not want to make them for a same-sex couple.

In a 4-3 opinion in September 2019, the Arizona Supreme Court ruled in favor of Phoenix-based Brush & Nib. Phoenix New Times reported that the court said that the city could not apply its Human Relations Ordinance to the business.

The organizers of the moot court said the case is a good one for students.

"You have to balance their freedom of speech and religious concern with the city of Phoenix saying you can't discriminate against people," Chris Hersey, an attorney who is helping to train the students, told the Bay Area Reporter in a June 25 phone interview.

Hersey and his longtime friend, fellow attorney Willie Hernandez, are both members of the board of directors and legal advisory committee of SVUDL.

"SVUDL was started just over five years ago," Hernandez said. "We in the legal community have been looking at ways to invest in the pipeline of future lawyers. It's hard to reach the high school level because it's so early in their education."

Hernandez and Hersey noted that a lot of the students from high school debate teams went onto become lawyers, and noted that a good way for the legal profession to be more representative of the general public would be to have more robust debate teams in lower-income and minority neighborhoods.

"We had been looking at ways to diversify the pipeline," Hernandez said. "But these skills are so transferable to many pathways of life."

Angel Armenta, who recently graduated Oak Grove High School in San Jose, will be participating in Wednesday's moot court. Armenta has been involved in SVUDL for all four years of high school. Armenta said he attended his first two competitions as a requirement for a class but decided to become more involved of his own accord.

"The case we are doing is quite interesting," Armenta said in a June 26 phone interview with the B.A.R. "SVUDL has helped me with the law and understanding the politics and ins-and-outs of debates; also it helped me with public speaking and debate as a whole."

Rolland Janairo, the executive director of SVUDL, told the B.A.R. by phone June 18 that the judges — two federal and one state — who will be hearing the case are Michelle Friedland of the 9th U.S. Circuit Court of Appeals; John Owens, also of the 9th Circuit; and Mary Greenwood of the 6th District California Court of Appeal.

Janairo said that the moot court was going to be done in person as in past years, but that the novel coronavirus has moved the event into virtual space.

"We want to elevate student voices and have them dive into these issues," Janairo said. "We want them to start applying the issues in this case to policy issues we see today, and how complex they are to be married together."

Hersey and Hernandez said the students are learning how to argue even for the side that they don't agree with personally.

"They handle it really well — like any attorneys that we deal with," Hersey said. "Lawyers don't always argue 'their' side of the issue. They advocate for clients and it's important to be able to advocate in a way that's good with your own conscience and your client. That's the most interesting side of this."

People are welcome to register to view the event Wednesday at 4 p.m. here. People are also invited to view a video recording of it on the same site Thursday.