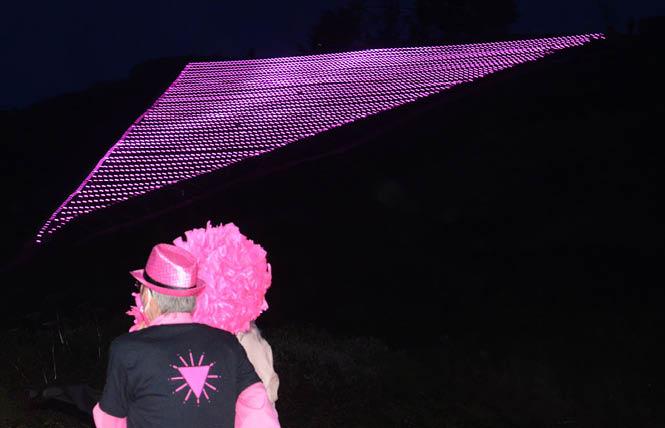 The crowd was smaller than previous years because of the coronavirus pandemic, but LGBTQ community leaders and others braved the wind high up on Twin Peaks Boulevard June 27 for the 25th annual lighting of the pink triangle.

Another change was that this year, there was no large installation party or ceremony. Just the outline of the triangle was done with tarps. It was lighted with 2,700 LED nodes of pink light.

The installation and the lighting of the triangle was organized by co-founder Patrick Carney, who worked closely with Ben Davis of Illuminate, the same nonprofit responsible for the Bay Lights display on the Bay Bridge.

"Even with the Pride parade being canceled, the virus can't keep our community down," gay state Senator Scott Wiener (D-San Francisco), told the Bay Area Reporter at the lighting ceremony. "Instead, we're finding new and innovative ways to celebrate Pride and recommit to the fight for justice. This new, illuminated pink triangle is jaw-droppingly beautiful and sends a powerful message of our community's resilience."

The lighting of the pink triangle was especially meaningful this year due to the COVID-19 shutdowns, which still sees many businesses in the Castro dark. The 50th annual San Francisco Pride parade was canceled, though several protest marches were held Sunday, June 28.

The festivities actually began much earlier than the nighttime lighting ceremony. That afternoon, a pink torch procession was held, during which one or two torchbearers carried an LED-lit pink torch from Oakland, across the Bay Bridge, all the way up to Twin Peaks. The torch was designed by Burning Man artists Josh Zubikoff and Srikanth Guttikonda of the Looking Up Arts Foundation.

To get to San Francisco, Carney said that the torch was held by Patricia Wilson as she rode in a car across the bridge, escorted by members of Dykes on Bikes. Wilson had helped organize the procession route.

The first torchbearer was Oakland Mayor Libby Schaaf and the final torchbearer was Breed, who was handed it atop Twin Peaks. Joe Hawkins, CEO of the Oakland LGBTQ Community Center, carried the torch with Schaaf, just hours after the Black-led center was vandalized by a window-smashing man. [See related story.]

Torchbearers along the route around Lake Merritt in Oakland included B.A.R. news editor Cynthia Laird. Torchbearers were given pink triangle masks, gloves, and T-shirts, and were escorted by a volunteer and several motorcycles on their trek to Twin Peaks. The torchbearers and their entourage were required to adhere to Centers for Disease Control and Prevention recommendations and kept six feet apart from each other.

Carney said that Breed loved the torch so much that it was given to her.

Teaching about what hatred can do
Around 8 p.m. the ceremony began with Carney introducing the dignitaries.

"So long ago the first pink triangle went up in the dark of night so we wouldn't be arrested and now it's expected to be part of Pride weekend," Carney said. "And now we're thrilled by that — that it's become official. Having it lit up is such a huge thrill because this is a giant in-your-face educational tool. It's a huge one-acre spot of pink on the hill and it's there for curiosity, so people will say 'what it that, why is it there?'"

Carney said the triangle was there to teach people about the Holocaust and what hatred can lead to.

"So many groups are targeted for hate," he said. "Whether it's Jews, Blacks, Mexicans, all of us. It's a sense of creating other — you're not one of us, you're one of them."

Sister Roma then recounted the history of the pink triangle. Now, Roma said, the symbol has been embraced by the queer community as a symbol of Pride.

"Holocaust survivor Elie Wiesel wrote the book 'Night' about his experiences," Chiu said. "He reminded us that to forget the dead would be akin to killing them a second time. This is why we're here to remember. To remember those who wore the pink triangles alongside those who wore the yellow stars and the red triangles. These are dark times — this is a month when our so-called president has denied health care to our transgender family members, has fought employment protections for LGBTQ brothers and sisters.

"This month we remember those who have died during this pandemic and those who've been murdered due to structural racism in our criminal justice system," he added. "But on this 25th anniversary of the pink triangle and this 50th anniversary of Pride we have hope. One thing about night is that it turns into day. We know it is always darkest before dawn. We come here this night, gay and straight, white and Black, yellow and Brown, to say that together we reclaim this symbol of oppression as a symbol of freedom. To saw that San Francisco and the light of this triangle will continue to be a beacon to the rest of the world of freedom and love and inclusion."

"When Pride got canceled, I assumed everything would be canceled," Wiener said. "But COVID-19 had not met Patrick. That this is still happening tonight speaks volumes about this community."

Wiener pointed out that the San Francisco LGBTQ community has been "to hell and back," going through the worst of the HIV/AIDS epidemic.

Breed was the last to speak. She opened her remarks by noting that no one could have predicted the ongoing pandemic, or that events the community loves, like SF Pride, would be canceled.

"Especially me, as a Black woman in America, that finally, finally everyone is seeing my lived experience through a whole other lens," the mayor said. "We know that there are challenges. As Sister Roma said when you think about it, over 70 countries in this world have laws that discriminate against people because of who they are and who they love, and there are 10 countries that still will put someone to death because of who they are and who they love. So what this means, this reminder of the past, this reminder of an ugly time in our history, has been taken away from that ugly time and used as a symbol, as a symbol of hope, as a symbol of a better future for all of us.

"We can do whatever we want when we come together, when we show love to one another, no matter what our race is, no matter what our sexual orientation is, we all in some capacity or another experience discrimination. That's why we are stronger together, and that's why in San Francisco we will never let hate divide us," Breed added. "We come together in the spirit of love, that's why Pride is always my favorite time of year. Because there's so much love, there's so much excitement that bring us closer together as a community."

The mayor then declared June 27 as Patrick Carney Day and Pink Triangle Day as everyone cheered.

Violinist Kippy Marks then played the iconic song "San Francisco" on a 198-year-old violin as the triangle was lit amid much cheering.

Artist Debra Walker, a 67-year-old lesbian who sits on the San Francisco Arts Commission, told the B.A.R. that she was quite moved by the event.

"The entire Pride experience this year is unique because we're each experiencing it somewhat alone, so coming together on Twin Peaks as they illuminated the triangle really brought us together," Walker said. "There's definitely evil in the world that we need to confront and taking back this symbol empowers us to confront it together."

The Pink Triangle will remain lit atop Twin Peaks until the conclusion of AIDS 2020 July 11, so there is still time for people to see it from their homes, along Market Street, or farther away if weather permits.