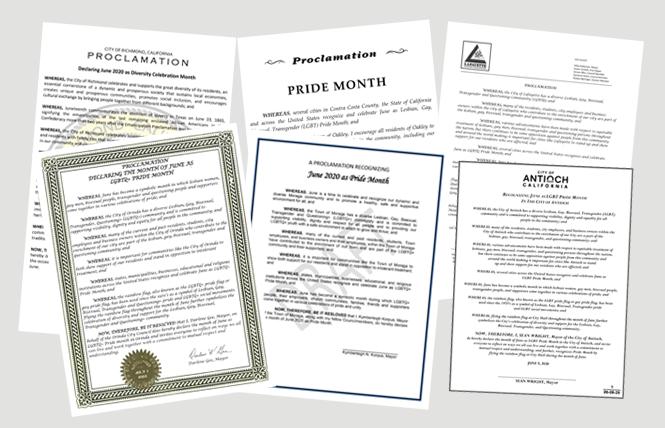 At 7:13 p.m. Wednesday, June 24, Moraga Mayor Kymberleigh N. Korpus declared June as Pride Month in her East Bay town. With her declaration, LGBTQ advocates in Contra Costa County cemented their four-year quest to see all 19 of the jurisdiction's cities and towns recognize the annual LGBTQ celebration in some manner.

The night prior city officials in Brentwood and Oakley also issued proclamations observing June as Pride Month. While their doing so assured seeing a countywide sweep of Pride observances for the first time this June, the trio now has the distinction of being the only municipalities in their county not to also be flying the rainbow flag this month.

Across the bay all 20 cities and towns in San Mateo County proclaimed June as Pride Month for the first time this year as well, with more than half of the Peninsula municipalities also flying the flag. With the city and county of San Francisco having raised the Pride flag, and all five cities in Napa County flying the rainbow flag for the second year in a row, four of the nine Bay Area counties now have every one of the cities and towns in their jurisdiction observing June as Pride Month.

Solano County was thwarted in joining the list due to the city of Dixon being the lone holdout in celebrating Pride Month among its seven cities. Various cities in Alameda, Marin, Santa Clara, and Sonoma counties also observe June as being Pride Month but not all.

The Lambda Democratic Club of Contra Costa County kicked off the Pride recognition campaign in its county back in March. Members of the LGBT political group attended the annual conference for the county's mayors that month to request that they support the issuance of Pride proclamations from their city councils and raise the rainbow flag in their cities. In previous years both Clayton and Danville had been the lone holdouts to not mark Pride in any manner.

As the Bay Area Reporter first reported in April, Clayton was the first to agree to issue a Pride proclamation and fly the rainbow flag throughout June. This month Danville followed suit, first by issuing a proclamation then agreeing to raise the Philly version of the rainbow flag that includes colored bans to signal support for the Black and Brown LGBTQ communities.

Moraga meeting
While no one addressed the city councils in Brentwood and Oakley Tuesday to request they fly the flag, the Moraga Town Council heard from eight members of the public who pressed them to raise the international symbol for the LGBTQ community.

All noted that their civic counterparts in what is known as Lamorinda raised rainbow flags in front of their city halls June 1. The nickname is shorthand for Lafayette, Moraga, and Orinda.

While she thanked the council members for issuing a Pride proclamation, as they have done in years prior, Moraga resident Rebecca Jensen urged them to publicly demonstrate its commitment "to supporting visibility, dignity and respect for all people and to providing our LGBTQ+ youth with a safe environment in which to grow and thrive." One way to do so, she noted, was by flying the rainbow flag.

"The council needs to raise the Pride flag; not doing so is also making a statement," she said. "Let's join our neighbor communities by flying the Pride flag and making a visible statement of support for our LGBTQ community."

Wendell Baker, the founder of the Moraga iKind Project, also asked the council to fly the Pride flag in the town. As a Boy Scout troop leader Baker helped push the organization to abandon its anti-gay policies and now promotes bullying prevention in the local schools.

He informed the council that he flies rainbow flags at his home and has only received positive comments from neighbors about his doing so. He had intended to donate several to the local schools to fly in May, but the novel coronavirus outbreak disrupted those plans due to it leading to the closure of the school sites for the rest of the academic year.

"It is important to let children growing up here know the LGBTQ community is supported. Seeing the town flying the flag is a wonderful way to show support," said Baker.

Like several people who submitted comments by email to the council, as it conducted its meeting via Zoom, Baker encouraged them to fly the Philly Pride flag. Jennifer Krane, a mother of three children who is co-president of the newly formed PFLAG chapter in Lamorinda, also voiced support for seeing the town fly that version of the rainbow flag.

Doing so, noted Krane, would "help us show and not simply tell" LGBTQ residents and employees of the town that they "are valued in Moraga and welcomed in Moraga."

As has happened this month at a number of city council meetings where residents asked that their cities raise the rainbow flag, the Moraga residents' requests went unaddressed. Because flying the flag wasn't listed on their agenda, Korpus advised her council colleagues they could not comment on the flag requests, only the Pride proclamation.

Contacted in early June by the B.A.R. about flying the Pride flag, Korpus had replied that it was her understanding Moraga doesn't "fly any non-governmental flag. Instead, we find other ways to demonstrate our commitment to various issues" such as issuing a Pride proclamation.

During the council's June 25 meeting, Korpus responded to the public comments by noting she and her colleagues "are hearing you. We are listening to you." She added that the Pride proclamation "is very important" to the council members and that the town "is definitely working on showing where it stands on these issues."

Councilwoman Renata Sos, who moved to Moraga in 2001 with her wife and their twin daughters, thanked the members of the public who submitted comments "for highlighting for us the importance of LGBTQ-plus equality in general and in particular in our community. And know we are listening."

Sos added that the council members, who took turns reading aloud the proclamation, were "heartfelt" about the message it carried.

"We want everyone to feel safe and to be their true and authentic selves," said Sos, who was appointed in 2018 to serve out the remainder of a council term through this December. "We want our children in this town to grow and to thrive with authenticity and without having to confront bigotry and intolerance. I believe those are our values. Let us live them. Let us protect them. Happy Pride Month."

Councilman Steve Woehleke pointed to the words of the first graph in the proclamation that note Pride Month "is a time to celebrate and recognize our dynamic and diverse Moraga community..."

"I would really like to see that not just in June but year round," said Woehleke, adding that the town council "can make a commitment to make it a year round, significant, substantive communication by this town."

All five of the council members made remarks in support of doing more to acknowledge the local LGBTQ community throughout the year and not merely during June.

Councilman Mike McCluer noted, "We need to do better." And Councilman Roger Wykle said, "I think Moraga's up to that challenge to do it year round."

Due to the Fourth of July holiday, the Political Notes column will return Monday, July 13.