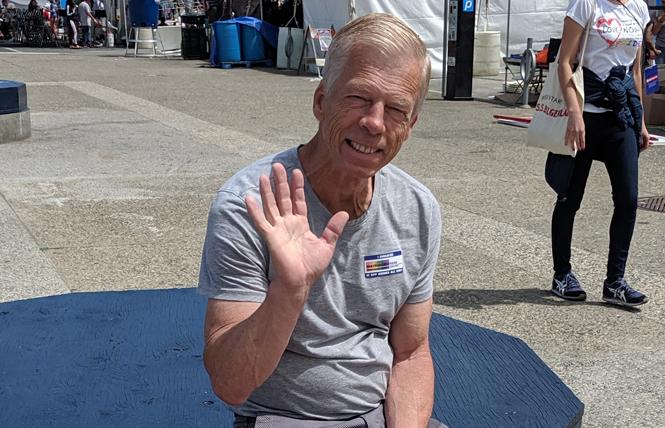 July 10, 1955 — May 8, 2020
Douglas Earl Kent was born July 10, 1955 in La Junta, Colorado. He was an Eagle Scout and graduated high school in Aurora, Colorado in 1973. He went on to earn a Bachelor of Science degree in sports medicine. (Friends did not know the university from which Mr. Kent received his degree.)

In 1979 he moved from Denver to San Francisco to join his good friend, Earl Kirk, who had moved to the city the year before.

Doug laid down roots here and thrived, making his living as a personal trainer and working at several gyms, culminating in the position of facilities director at the Embarcadero YMCA and the Presidio Y.

He was an outdoorsman and enjoyed camping, skiing, hiking, and four-wheeling in his Jeep.

And beyond all of that, Doug had multiple talents and never ceased to amaze his friends with the following: sewing (he made Halloween costumes for several of his friends), gardening (if you didn't know the name of a tree, plant, or flower, just ask Doug), handy work (Doug would graciously attend to whatever need you had — all you had to do was ask him).

And one of the best parts of being a friend of Doug's was that you got invited to his dinner parties, which became almost legendary. Everything was made from scratch. You never knew what he would serve, but you always knew it would be good.

But the best was always dessert. Doug enjoyed baking most of all, especially cakes. And we all appreciated this at our birthdays because Doug always baked each of us a fabulous cake.

And Doug had a fun sense of humor. (No one enjoyed his jokes more than he did!)

He is survived and especially missed by his mother, Flora Kent; his sisters, Cindy Burnett and Teri Quintana; and his brother, Mike Kent.