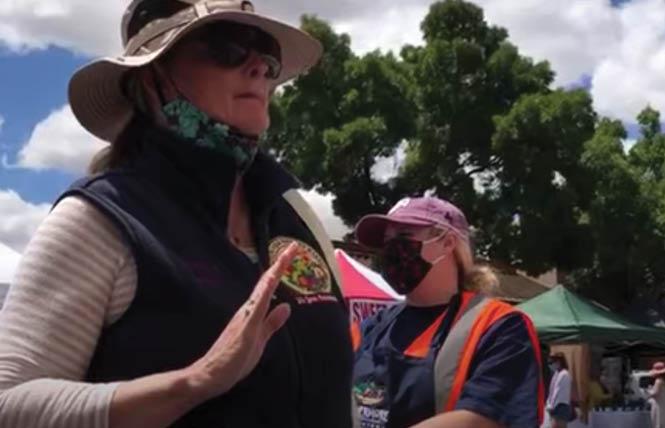 The operator of 17 farmers' markets in the Bay Area, including three in San Francisco, bans the display of the rainbow flag at its markets, according to a video of a confrontation at its Livermore market that was uploaded Monday to the website of the East Bay city's Pride group.

Following the incident earlier this month, LGBT leaders in the Alameda County city are warning that the Livermore Farmers' Market "may not be a safe space for LGBTQ+ vendors," and an LGBT-owned business in the city has decided to no longer participate in the twice-weekly markets. They are also calling for a new operator to be brought in to run the markets.

"Many people aren't aware these things still happen. Part of our mission is to have this dialogue and take action when action is needed," said Amy Pannu, a queer Livermore resident and leader of the 1-year-old Pride group.

And Fort Mason Center for Arts & Culture, which works with the same farmers' market management group to run the markets hosted by the San Francisco cultural facility in the Marina district, is working to ensure that vendors there can display rainbow flags in June for Pride Month or anytime of year.

"The Pride flag is an icon of inclusivity, diversity, and unity. We support this and all other expressions of our LGTBQ+ communities," replied Nick Kinsey, the center's director of external affairs, to the B.A.R.'s request for comment. "We welcome displays of Pride at the market and year-round on our campus. We will be flying it ourselves throughout Pride Month including on market days."

In the nearly three-minute video clip Pannu recorded, California Farmers' Markets Association director Gail Hayden can be heard admonishing Dan Floyd, a gay married man who owns Dan Good Cookies, for handing out the Pride flags, the international symbol of the LGBTQ community, during the market held Sunday, June 7, at the start of Pride Month. Pannu was helping to hand out the flags, which Floyd as a market vendor had done last year without incident.

In the video Hayden can be heard telling Floyd that he should have read the rules packet given to vendors about "cooperating with market management" and that she "will suspend you right now until you read those rules." Because the video begins midway through their conversation, it is unclear what Floyd had said that Hayden found objectionable enough to declare, "This is Disneyland, so you can't talk to us this way."

Floyd, noting he is a member of the LGBT community, responds that he has an issue with how Hayden is treating him at the moment and that he is willing to read the rules. He also points out that he did not support CFMA's recent taking over of the management of the East Bay city's farmers' market but believes they have run " a great market" since doing so earlier this year.

He tells Hayden he won't "show up with flags without telling you" in the future. Nonetheless, Floyd says of the policy against having the flags, "I don't think it makes sense."

Hayden did not immediately respond to the B.A.R.'s request for comment Monday for this article.

Floyd launched his cookie business at the Livermore Farmers' Market during Pride Month in 2016 and turned it into a brick-and-mortar retail establishment last year a few weeks prior to Christmas. He told the B.A.R. by phone Monday that the only communication he has had with CFMA since that Sunday came this past Friday, June 12, when he received a citation from it.

He was at his store Sunday, June 14, instead of the farmers' market and saw a stream of customers coming in wanting to know why.

"The reason I left in the first place was I knew I would not feel comfortable there as long as the Hayden family is in charge of the organization," said Floyd. "It is not a comfortable situation."

In March, the farmers' market had temporarily closed when the shelter-in-place orders were instituted due to the novel coronavirus outbreak. Thus, Floyd had opened his store on Sundays for his customers and doesn't believe his not being at the market will hurt his business.

"Last week I thought I might see half of the people we get at the market. But yesterday we sold out of literally everything," he said.

In a statement on his company website, Floyd informed his customers he will be opening his store at 2958 Pacific Avenue in Livermore from 9 a.m. to 5 p.m. on Sundays with a fuller menu of baked goods for sale.

"I no longer feel safe under the direction of the new management company, and I cannot in good conscience continue to operate under their leadership," wrote Floyd. "I believe there is a level of respect and safety we all owe to one another simply for being people, and, sadly, I have found that to be critically lacking with them."

Pannu told the B.A.R. she was meeting Monday night to discuss the situation with leaders of Livermore Downtown Inc., the local group that hires the management company to run the city's farmers' market after they reached out to the Pride leaders.

She said they had asked Floyd if they could be at his booth to promote the virtual Pride event they are hosting Sunday, June 28, this year. They made the decision to cancel the second event they were going to hold in October, during LGBT History Month and a cooler part of the year in Livermore, because of the health pandemic.

"One way we thought to promote it was by handing out free pride flags to the first 500 people," explained Pannu. "We have nearly gone through that amount now."

Tuesday, the former operator of the market, the Pacific Coast Farmers' Market Association, posted a statement in support of the LGBT community on its Facebook page and noted it turned over management of the Livermore market on March 29.

"This is a nonpartisan issue. What in the world is her problem? I'm disgusted that you would be asked to stop passing out flags," wrote Aguilar. "What pisses me off is she does not know free speech policy. All farmer's markets have a free speech area. The flags could have been passed out there."

In describing the incident in their statement posted to their website, Livermore Pride leaders wrote that Hayden had "approached abruptly and verbally accosted" Pannu and Floyd. The Pride group was critical of her "hostile demeanor as well as the public manner in which she berated Dan, a Market vendor, without justification."

The statement explained that the previous management contractor for the market had not voiced any concerns with Floyd's handing out Pride-related materials in the past and had some discussions with Livermore Pride organizers about being a sponsor of its inaugural event last October that drew more than 2,500 people.

Floyd told the B.A.R. he didn't think twice about having the Pride organizers at his booth at the start of Pride Month this year when they asked him if they could be there. The flags were given out for free to those came up to his booth.

"We did not flag down anyone to come get them," he said, adding that he doesn't recall saying anything to Hayden that warranted her reacting in the way she did.

While CFMA's rules inform vendors that "petitions and flyer distributions are prohibited inside the market," according to Pride's statement, its leaders contend that does not cover Pride flags because they "are neither a petition nor a flyer."

They also raised complaints that Hayden removed her face mask in admonishing Floyd in violation of the safety precaution rules CFMA adopted due to the novel coronavirus outbreak. Signs at the market require people to wear face masks.

According to the statement, Floyd has yet to receive clarification from Hayden or the CFMA about the rules regarding handing out of the flags.

They also have yet "to defend their assertion that presence of flags in Dan's booth or their distribution to his customers represent a violation. What Dan did ultimately receive was notice that he would be given a citation for allowing a non-employee to be in his booth, something that was not the focus of Ms. Hayden's tirade last Sunday," according to the statement.

They also contend Hayden targeted them because they were representing the LGBT community and used "straw man arguments" rooted in "dog-whistle language used to fuel extremist and hateful perspectives of LGBTQ+ communities."

(In the video clip Hayden doesn't say anything overtly homophobic and seems to refer to having to deal with anti-abortion protesters showing up to farmers' markets "with fetuses on ironing boards" as the reasoning behind the policy she contends Floyd violated.)

"Nothing else explains the outright vitriol and weighted language used in this recording," according to the Pride group's statement. "The Market management could have simply taken their newly contracted partner vendor aside discreetly and advised him of the potential conflict with the policies and encouraged the vendor to review them. At no point during the full encounter, on or off camera, was this request made so simply and without escalation."

Rather than call for a boycott, the Pride group is asking its customers to wear their own rainbow-themed clothing in support.

"We don't want the individual vendors to be negatively impacted, so we encourage you to shop the Market while wearing your Pride colors proudly and letting vendors know about your concerns. It's important that they know LGBTQ+ consumer dollars are part of the Farmers Market economy," stated the group.

As for Floyd, he told the B.A.R. the response he has received from the community and his customers has been overwhelming.

"I have never, never thought so many people would come out in support. I don't know what to feel," he said. "I am happy and definitely feel the love and support. I am more overwhelmed than anything else."