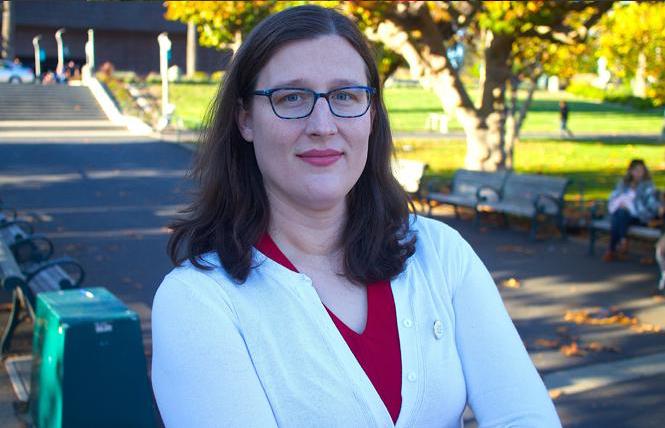 The San Francisco Board of Supervisors' rules committee is scheduled to hold a hearing Monday, June 8, for Jane Natoli, a trans woman whom Mayor London Breed nominated to serve on the board that oversees the San Francisco Municipal Transportation Agency. The committee should forward Natoli's name to the full board, which should confirm her. The rules committee's hearing on Natoli last month was canceled. [Update: After this editorial was published, it was learned Thursday, June 4, that the June 8 hearing for Ms. Natoli has been continued.]

SFMTA has been near the top of the list of supervisors who want to keep a check on the mayor. The Board of Supervisors, in a 6-5 vote May 12, rejected the reappointment of SFMTA director Cristina Rubke, an attorney and disability rights advocate whom Breed had renominated. The move was widely seen as a rebuke of the SFMTA board's unanimous vote in April to approve a two-year transit budget with fare hikes, the San Francisco Examiner reported. The Board of Supervisors had previously voted 10-1 to approve a resolution calling for no transit fare increases.

In a news release from the mayor's office announcing her nomination, Natoli noted that she knows the value of safe streets as she's been hit three times while biking on city streets. She's a former member of the San Francisco Bicycle Coalition's board of directors and remains involved with the organization. Natoli has advocated and supported Tumlin in implementing protected bike lanes on Folsom and Howard streets, and car-free stretches along Market.

Natoli, who does not currently serve on the SFMTA board, did not vote on the fare hike issue. In an interview last month, Natoli told us that she is looking forward to her hearing before the rules committee. Its members include chair Supervisor Hillary Ronen, and Supervisors Catherine Stefani and Gordon Mar.

She also told us that she'd rather explore "all options" before voting to institute a fare hike, should she be approved for the board seat and the issue comes up.

The SFMTA board only has four directors at the moment. Natoli would be the transit oversight body's first transgender member and the lone representative from the LGBT community due to gay SFMTA board member Art Torres' departure May 20 following his appointment by his alma mater UC Santa Cruz as an alumni representative on the University of California Board of Regents.

Given the drastic cuts in revenue and service for Muni due to the novel coronavirus pandemic and the stay-at-home orders that are now slowly being lifted, Natoli told us that the path forward for public transportation "will be hard for awhile." She said that mass transit needs to build "ridership trust" when service increases. Right now the Muni Metro subway is closed and many bus lines are not operating.

The San Francisco Bicycle Coalition supports her nomination, as does the Bay Area Housing Advocacy Coalition.

"Jane is a pro-housing, urbanist friend of HAC who understands the strong connection between housing and transportation policy," a May email stated.

The rules committee should give Natoli a fair hearing. We think Natoli would be an asset to the SFMTA board. In this case, the supervisors should set aside their disagreements with the mayor, who has made an excellent nomination, and approve Natoli, a qualified candidate, for the SFMTA board.

Updated, 6/4/20: This editorial has been updated to include that the June 8 hearing for Ms. Natoli has been continued.